How to ripen green tomato's. 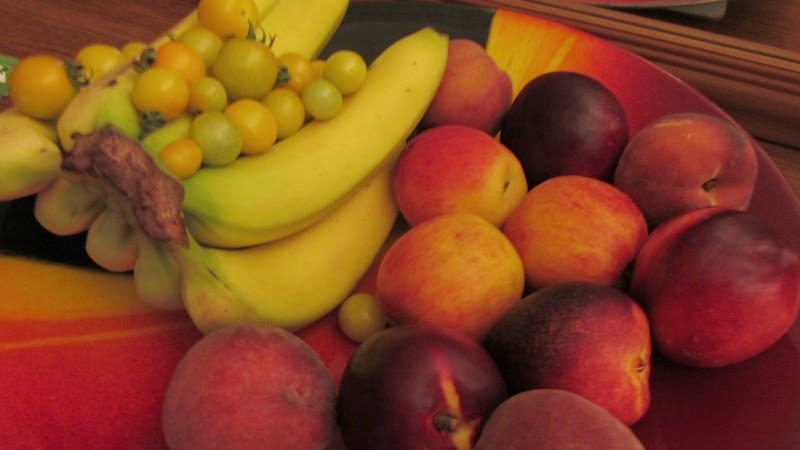 Soggibottom hasn't had many red tomato plants this year, even when they are yellow tomato's they still need to ripen. Easy tip, put them with banana's. IT WORKS.
Posted by Soggibottom at Monday, July 21, 2014 13 comments: 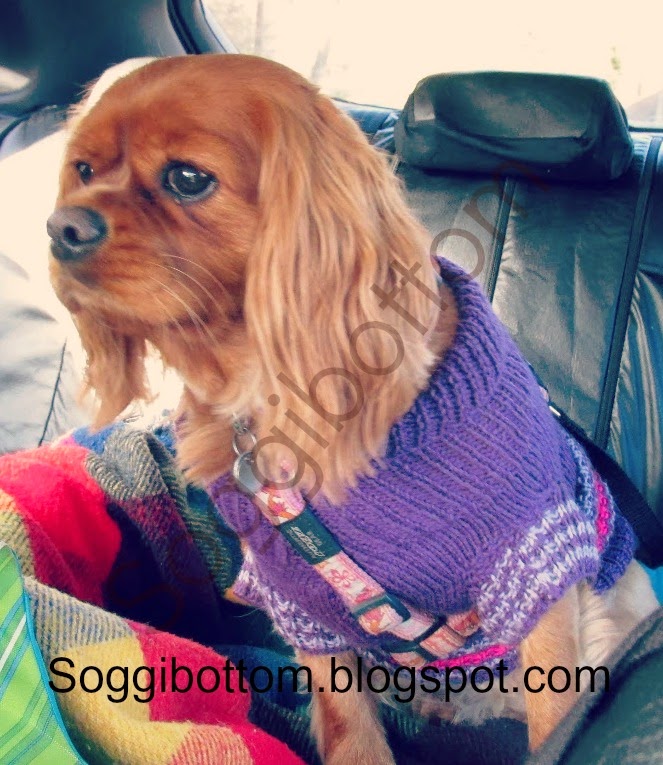 Our very own Freya Rose Blossom  THE CAT FLAP CAVALIER modelling her own sweater.

A Free pattern is well over due from Soggibottom. This time it's a dog sweater.
My own sweater pattern, you are very welcome to use for your own private use. 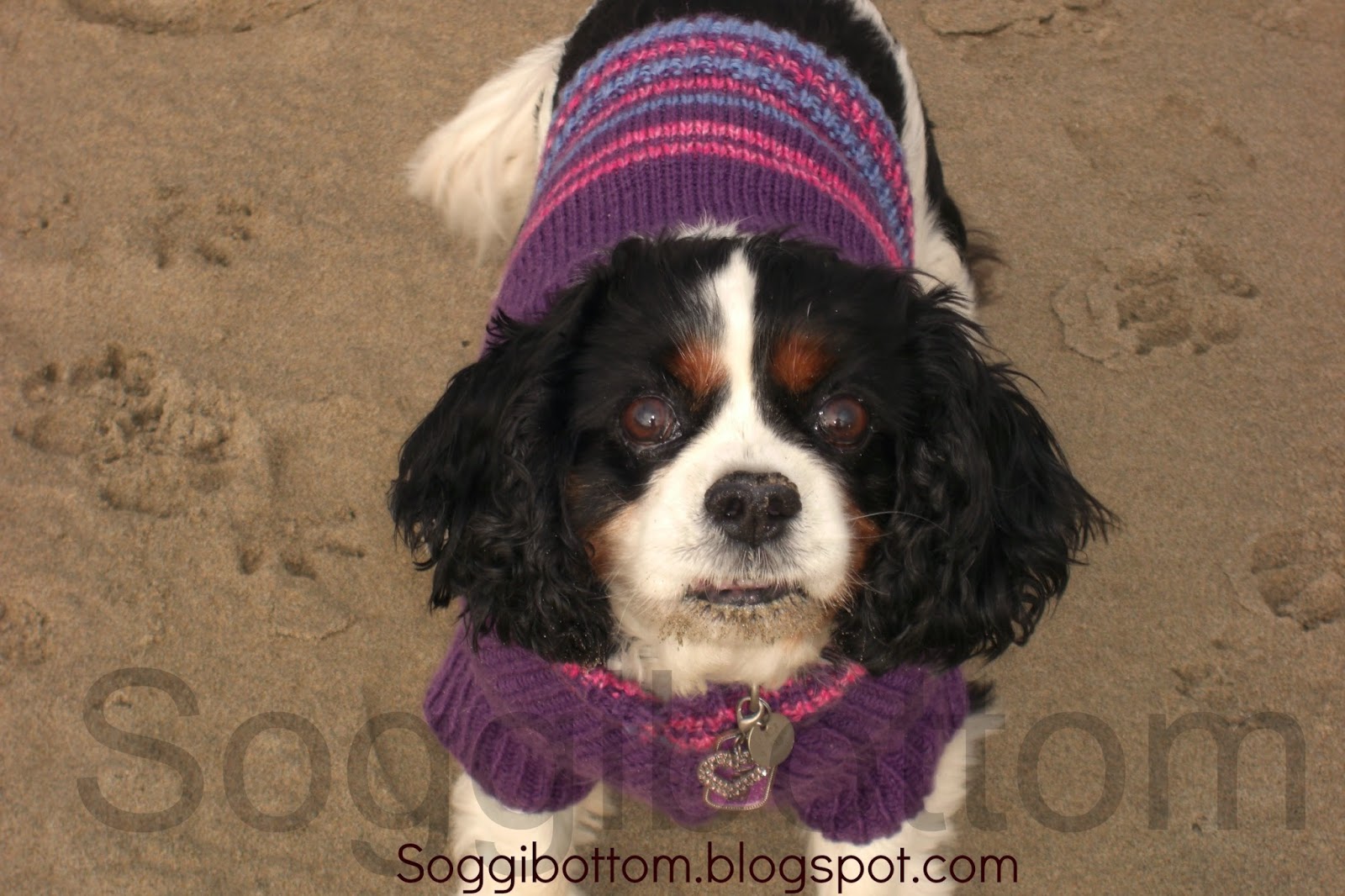 This also gives a great opportunity to including our beloved Amie Soto Blossom who used to have her own selection of sweaters. Her collection grew as she got older, they were especially helpful at keeping the chill off on beach walks and her walks on Dartmoor.

There are no buttons, no fiddly bits to fasten as your dog squirms.
Roll down the collar, which goes over your dogs head, hold one paw up at a time and slip it into the sleeve, roll the sweater down over your dogs back.

If you need any help because you don't understand the pattern, let me know.I'll try to keep things simple, it's an easy pattern you shouldn't get lost.

Next Row
Knit increasing 1 stitch at each end of the row.
Next Row
Purl to end
Continue adding stitches on every alternate knit row until you have 89 (109) (103) stitches on your needle. 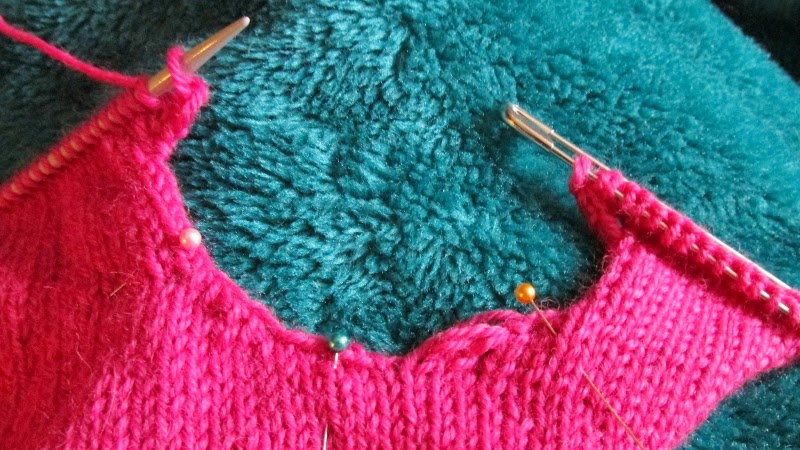 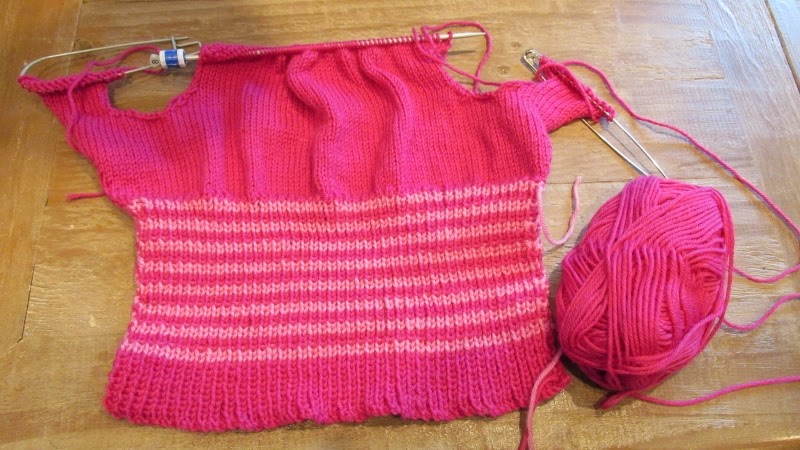 Casting on 3 (4) (5) stitches at the beginning of pick up row instead of at the end, work the other leg sleeve in the same way.

Next Row.
Knit (1 row knit, 1 row purl) decreasing one stitch at each end of the next 9 alternate rows.

Next Row
Rib (knit one, purl one) every row still decreasing 1 stitch on every alternate row until there are 75 (87) (99) stitches on needles.

Rib for another 12 rows without decreasing.
Cast Off.
Sew seam and roll back the neck collar.

This is an easy pattern that you can alter depending on the length of your dog. 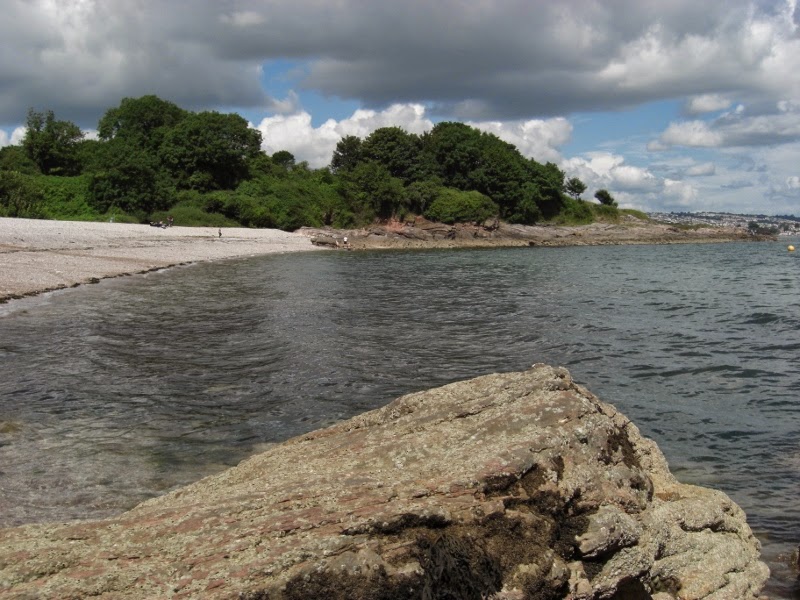 This pattern is for Lorraine's mum.
When she goes on holiday she wants to knit dog sweaters for an animal shelter. 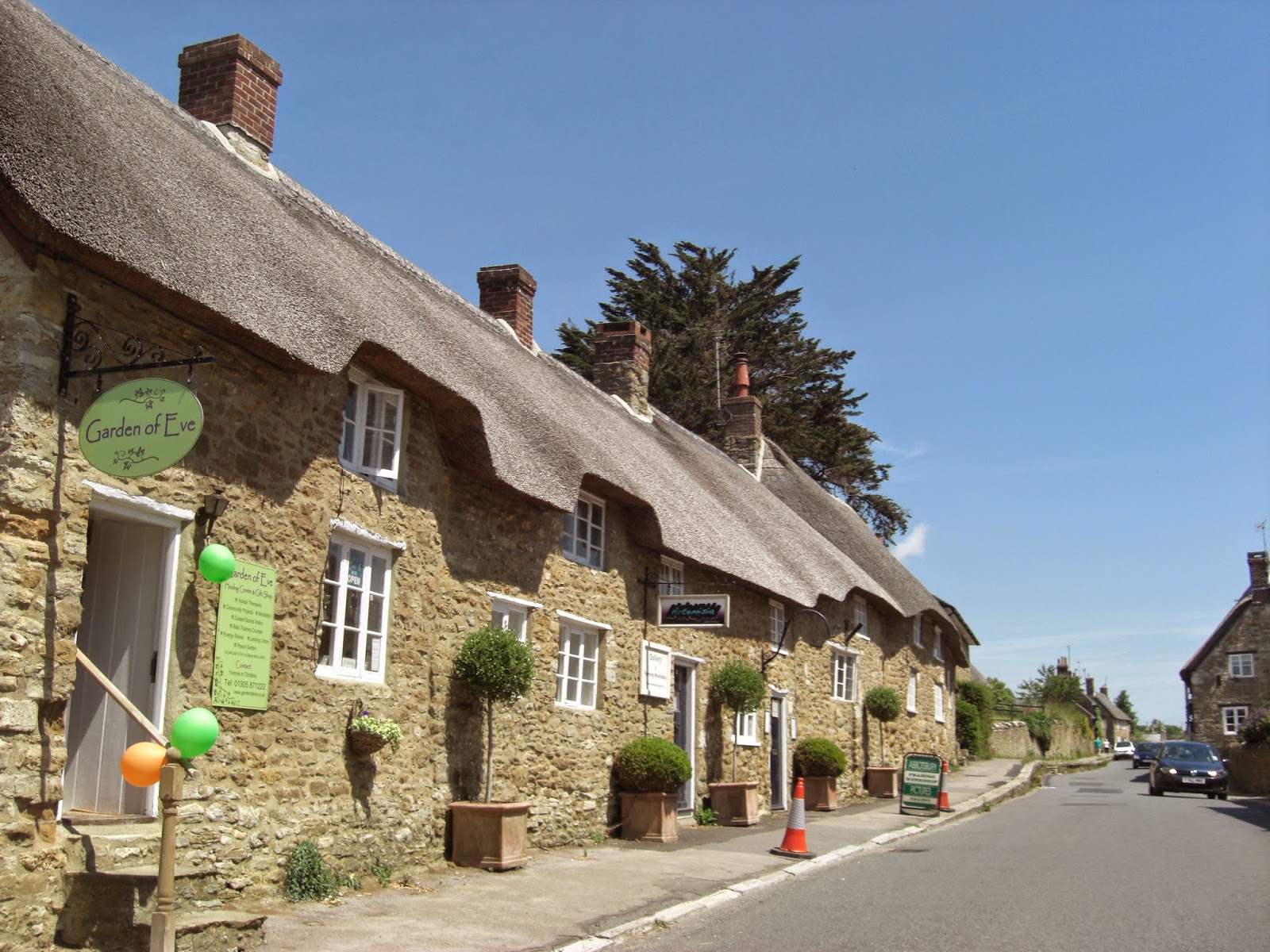 Meandering along country lanes you never know what you might come across.
Picturesque thatched cottages are always a hit.
The Summer seems to be speeding by at an alarming rate, flying by in a glorious heat haze and blue skies.
A bit like last Summer, last Summer we were too busy watching what was happening around Soggibottom cottage to take much notice of blue skies. For us, it was the dustiest, noisiest and most stressful Summer ever spent here.


There were times we couldn't get out of our own gate. 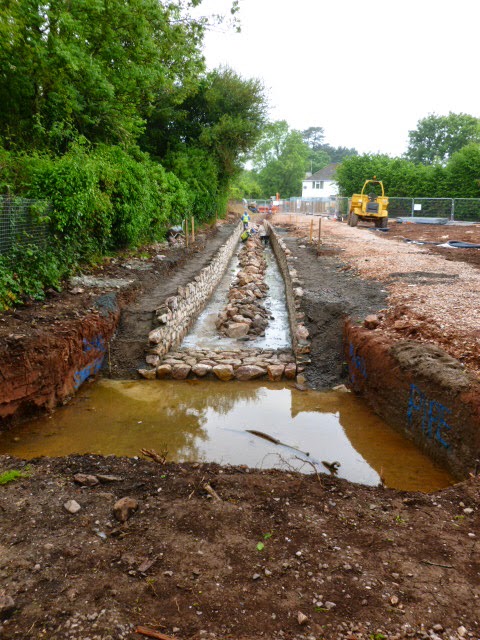 Building a water relief channel to help with the problem of flooding certainly was a challenge.
Even more so when you were living right beside the build.


One of the highlights definitely had to be the day we arrived home to find a dirty great crack that was getting bigger and bigger as we looked at it seven feet away from our cottage wall. The side of the newly dug water channel had started to collapse, as it collapsed the digger went gaily backwards and forwards without anyone bothering to stop work until we arrived.  Must admit that was more than a bit worrying at the time.


Our little Medieval bridge we use to get to Soggibottom even had a frogman under it. The 7 ton weight limit was increased to 40 tons so the water channel building materials could go travel over the bridge and not an easier route across a large park at the back of the cottage.
Couldn't have the grass damaged.  The cricket club would be really put out if their cricket pitch was damaged and they lost out on a whole season of playing cricket.
Instead our little bridge was damaged, it was never ever built to take 40 ton loads of heavy building materials. It used to take ponies with carts. 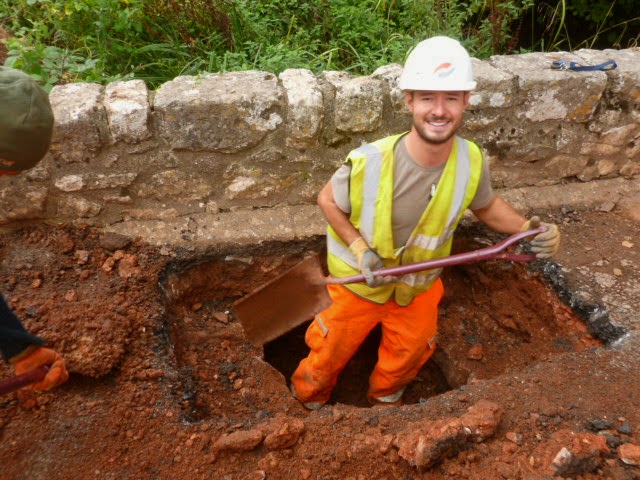 It wasn't an all doom and gloom Summer. There were times we had to laugh at the things that kept going wrong (let no one tell you any different, things did go wrong), most of what happened really couldn't have been made up. I haven't yet mentioned the bat men monitoring for bats. 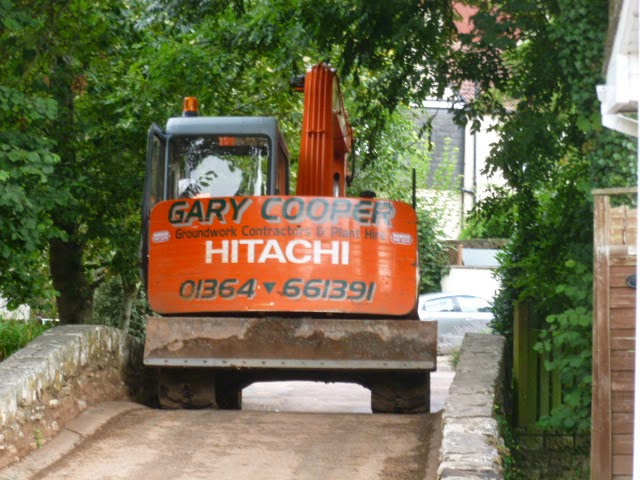 The best day ever, when Gary Cooper (yes really) took his blasted digger over the bridge for the last time, never to return.
Wish I could report that was the end of it, the water relief channel all built, up and running and most of all working. Everything that was broken repaired. 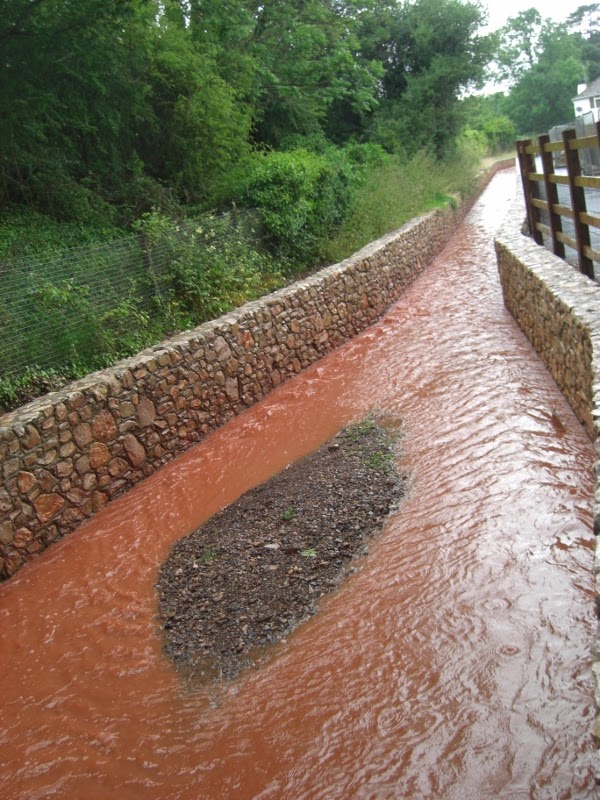 Well, the channel kind of works. If it hadn't have been there on February 14th we believe the cottage would have been flooded yet again. Unfortunately the channel now has a build up of silt caused from on going road building around the village. The channel is filling up fast and not only with water.
The channel it's self has a few issues that still have to be put right. 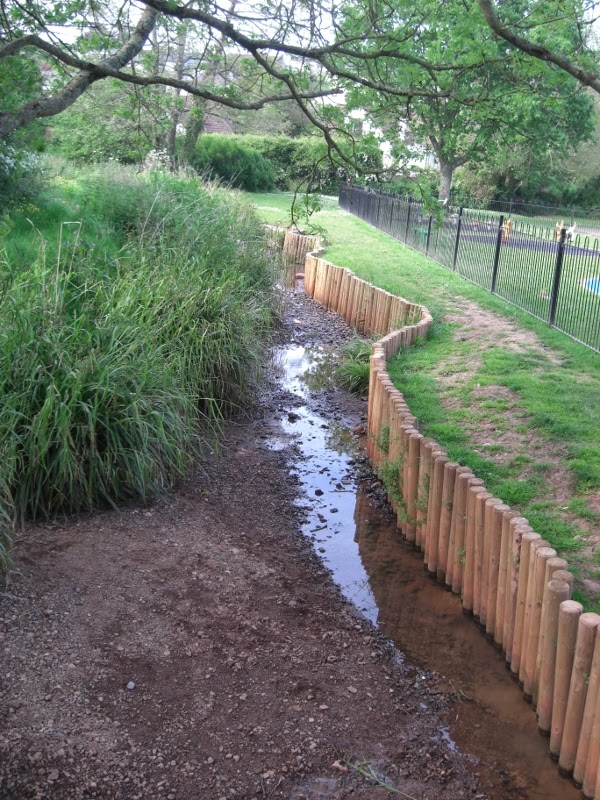 The stream that used to take all the river water has started to over grow with weeds because the water now travels along the new water relief channel. At times this week the water has hardly trickled along the old route of the stream. More issues. 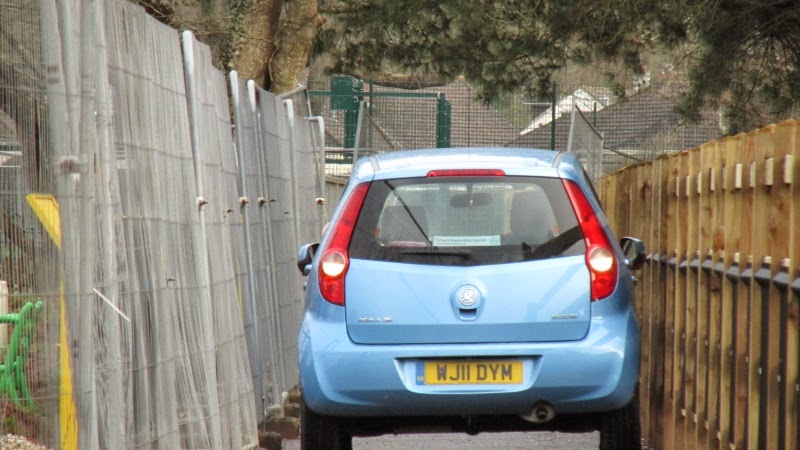 The path way to the park runs beside another ongoing building project of a children's playground, the path in the middle beside the water channel is wide enough for a small car to travel along. Unfortunately the driver of this particular car went all the way before realizing there was no way out and they shouldn't have been there anyway. 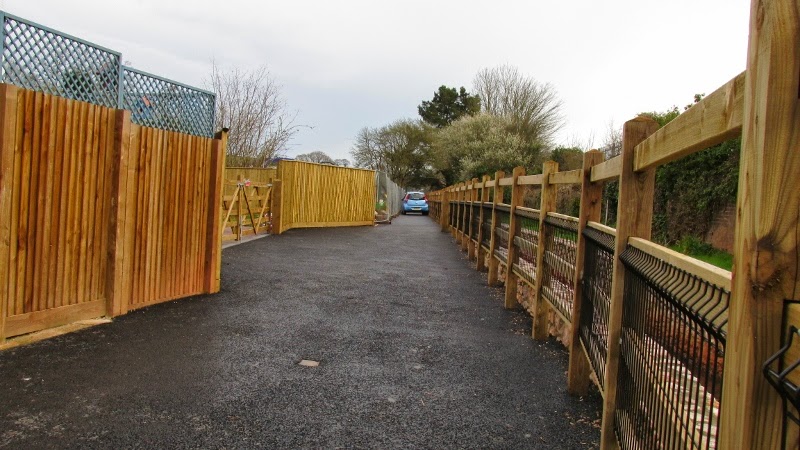 Took ages to back out and poor woman was then photographed and filmed while trying to wriggle her way back bumping her car on the sides of the fence as she went. 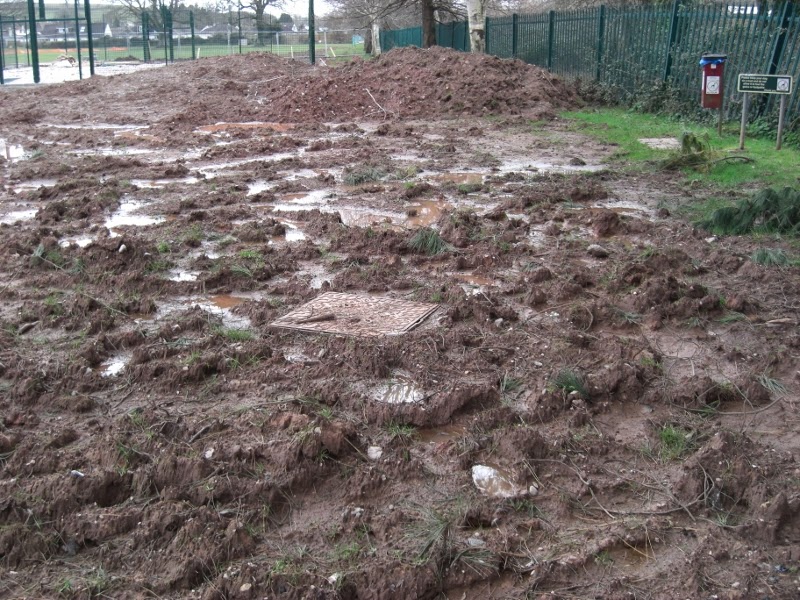 As for the park, the Cricket Club and their cricket pitch, (the reason why heavy lorries put such a strain on our little bridge and a bigger strain on our sanity last year) well, that got a bit of a heavy battering as another building project in the park took place at the beginning of the year.
All in all it seemed a pointless exercise coming over our bridge to build the water channel to start with after they left all this mess in the park. 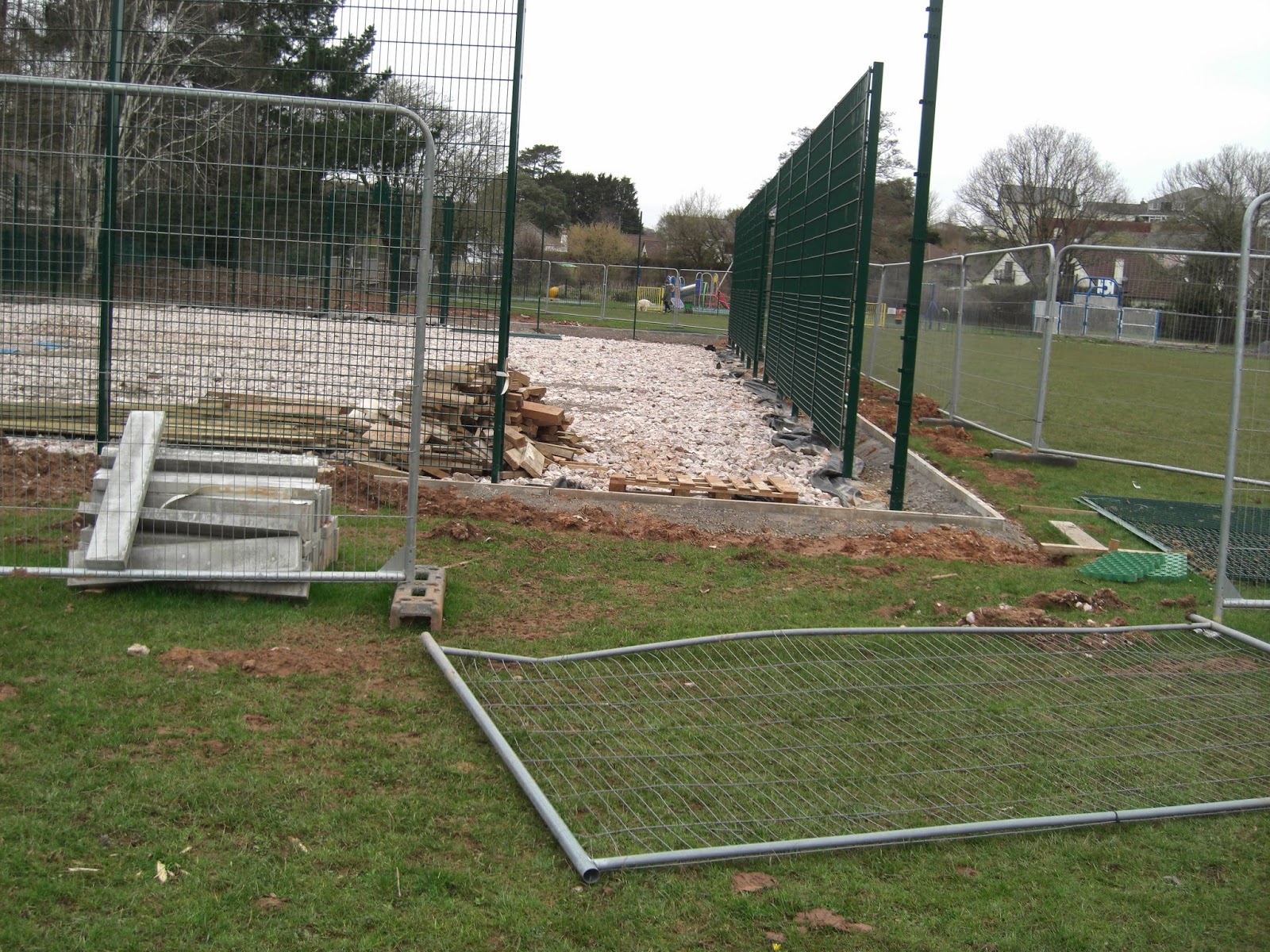 Most of the mess did get cleared up. The cricket club got their cricket pitch back. Some building work of a ball park is still ongoing. They started it in January, as it's now July things obviously take time. 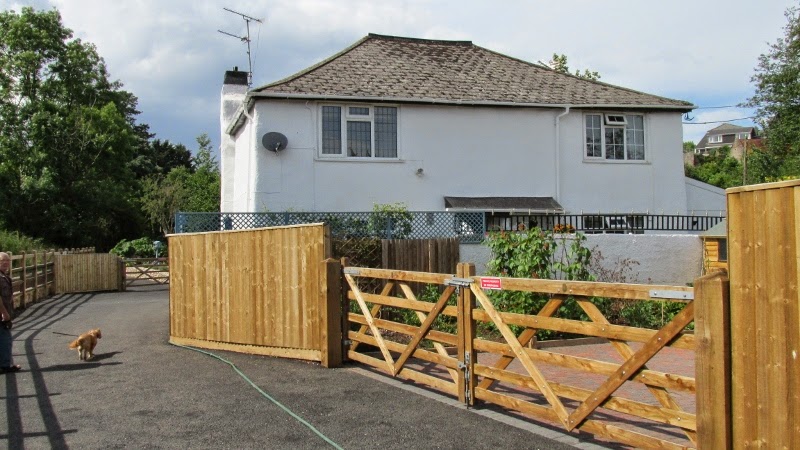 We have a new car park and even a new veggie plot at the back of Soggibottom. 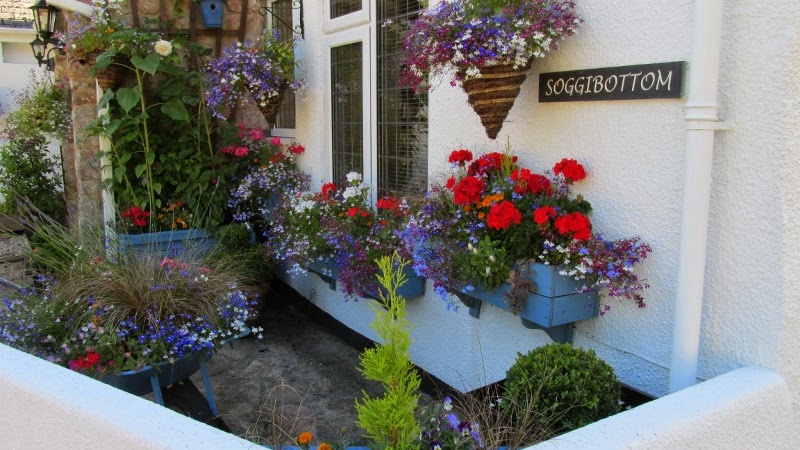 Best of all, Soggibottom is still here. 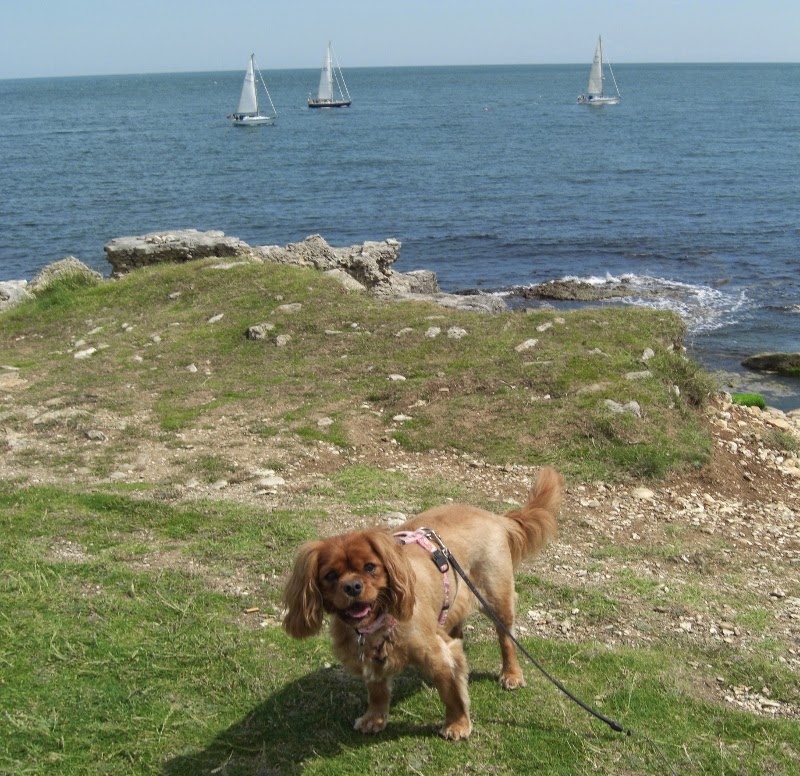 This is the best kind of traffic to sit back and enjoy watching as it passes.

Freya can be found at CAT FLAP CAVALIER as usual.

Hope everyone who has asked for a cottage water relief channel update is happy.