Flooded twice in one week, it's probably not going to break any records as it seems most of the South West have had their own share of water. Every flooding has it's own story. I don't think being flooded three times in seven weeks breaks any records either. Well, the cottage is called Soggibottom.


After 350 years she is still standing. Same scene, different day.


We would like to thank everyone who has left a comment of best wishes over the last few weeks.
All good thoughts help, there are times when we really have been standing on an island surrounded by water.
The island being Soggibottom cottage. It's helped us to be able to share, and know we aren't alone, most of all you have helped to encourage us to try and be back, up and running as normal.
All good intentions of getting around to thanking you all personally went out of the window last Wednesday, as water gushed around in the corner of the cottage again. We dried our small hall way out. The water never got any further than our hall way.
It was ready and dry enough in here to have a new floor on Thursday.
Sand bags and flood gate were still in, so the guys had to climb over the defenses.


You have to start putting things back at some time, even when the weather forecast tells you there are flood warnings. Living with a concrete floor isn't a good experience. It might have been better if we had had some furniture. But as that went out of the door when we were flooded in October, Freya, Frank and I set up camp on the floor in front of the fireplace.Frank gave his garden chair that he normally sits on outside to Tony. You do what you have to do, you make the best of what you have, we are thankfull it wasn't worse.
This photo is from last night, when the water once again started to come through the door. Not sure if Frank thought he was going to help.


Quilts came off of beds, towels, curtains, cushions, blankets, in fact anything that might help us keep the water at bay. My half empty linen cupboard is now completely bare. Once again the water made it to the door of our living room. We started to bail water from the hall in the end, and then the water level went down. As it did before.


Our new flood gate came yesterday morning, as it was raining so much it wasn't possible to take down the flood defenses that were already in place and replace them with our new flood gate. But here it is, it might have a good test tonight as water tables are high and it's raining heavily again. WE ARE ALL ON WATER WATCH AGAIN.


It clips to the inside of the door frame and the screws at each clip tighten to form a water tight seal.. we hope. 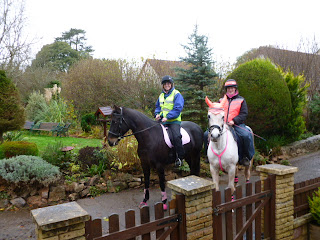 This morning the new flood gate seemed to be the talk of the village. I thought you might like to see some of our passing traffic. 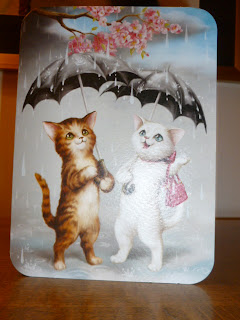 There has been so much devastation from flooding here in the South West this weekend, as I said before, back in October, it all dries out. The best thing to do if you start to lose the battle of keeping your home dry is to head to another level, thankfully we didn't have to do that, but we would have done if we had to.

Never drive into flood water. Never think by walking through the water you will be safe. You can't see what is under your feet and most flood waters have strong currents that can knock you off of your feet and sweep you away. Never be fooled into thinking it's clean water, it isn't, it's full of nasty bugs and other things that will make you ill.

Where ever you are keep dry and safe this week.
Thanks again guys, we know your out there. x x x

Flood no. 2....6 weeks and four days after flooding in October.

Six weeks and four days exactly, since Soggibottom flooded at the start of October.


I wish I could say that the photo of Freya was taken six weeks ago, but it was taken at 8.a.m. this morning.


We aren't the only ones in the South West of England today. There are houses and cars that have been trapped by flood water.


If anyone ever wonder's exactly what  colour the water is when you get flooded, mostly it's this colour.


Not such a beautiful muddy red, kind of sewerage dirt and who knows what else.
Can there be anything else ?


Our little car has been bashed by someone who wasn't looking where they were going earlier this year.
She's now survived flood water for the second time.. Luckily it was parked where the old garage used to be and the spot is slightly raised from the rest of the road.


With help from our flood gate that was in the front of the door all night, our bed quilts and some of the contents of my linen cupboard. We managed to keep most of the cottage dry inside this time.


We also have sandbags around the doors. More heavy rain forecast over the next few days, we are all taking our turn for water watch.


Apart from the squabbles over the new cat bed/


dog bed. Things are starting to come together at the cottage again after weeks of camping out in one room because of the flood at the beginning of October.....
Hopefully we will be back to blog visiting and normal blogging soon. There are only so many times you can photo a concrete floor, then it becomes terribly boring. See you all soon.


Small stream.. BIG PROBLEM when the water tables and the amount of rainfall and the high tides go together, We live near to the South West Coast...  Tide times Rule.. who ever thought that at 20 minutes past four in the morning, there would be a flood in the cottage.

This is our biggest problem, one that has yet to be solved. Underwater wells and water tables....
A high bank that surrounded and cut off the cottage from the playing field, well, we really thought the high bank (mini dyke) would do the trick. Just goes to show you, how you should never take things for granted.


Lots and lots of berries on the tree's this year, is that because we are going to have a hard and cold Winter or because of the the amount of rainfall ?


There is only so much brown muddy water that you can take in.


They aren't my shoes by the way.


We have all made the best of things over the last few weeks.


It's what we are really good at..


Freya was a bit too quick for the camera, in her enthusiasm to try new things out... she is over at the CATFLAP CAVALIER .
Not our usual post on such a special  Sunday.
We all wear our poppies with pride XXXXXXXXXX
Posted by Soggibottom at Sunday, November 11, 2012 7 comments:

One month after flooding. BAD DAY in progress. Approach at your own RISK


One month has past since the cottage was flooded.


Not much has changed, except the weather has got colder. So, I can't really give an update on how we are progressing putting the cottage back together again.


Although we do have a new fireplace now. All that's missing is a fire to go into it.

The oak we used is what is known as green Oak, it has yet to dry out. When it starts to dry it cracks slightly and takes on a very bespoke look all of it's own. It will be another six months before we can wax the wood. No stain, just wax polish. You'll note that the fireplace is sitting on top of our concrete floor. The reason why everything is so dusty at the moment. At least we are dry.


Freya has had post during the last few weeks.  Every time something comes through the door from the postman, Freya sits and holds her paw up. Not everything has been for Freya, Frankie de tabby had a hand knitting blanket to sit on from Caroline over at Uniqart.


Caroline also sent some new knitting needles to replace the ones I lost in the flood.


How kind and thoughtful is that ?

Especially as a few days later Caroline and her family were on holiday and near to Hurricane Sandy.

We had a postcard from New York the day that Hurricane Sandy decided to wreak the lives of so many. Allie had been visiting New York a few weeks before. Thanks Allie, it got here. The postcard arrived on a very memorable day for New York.


Thanks again for all the kind thoughts and replacements for Freya's new toy box. She hasn't got a new toy box yet, but Santa Paws is coming and it won't be long before the one she lost is replaced.


Freya Rose Blossom is over at the catflap cavalier as usual, along with


Frankie de tabby. Although Frank is beginning to show his age, he really is as big as he looks. Just slightly lighter in weight than he used to be. I'm pleased to say Frank is conducting himself in a very graceful manor considering his best seat is no longer there. Just as well as his food dish is where he can find it.
Posted by Soggibottom at Saturday, November 03, 2012 11 comments:

Soggibottom's all hallow's eve... not Spooky at all.


This is about as spooky  as Halloween gets here at Soggibottom Cottage this year guys...
Who would want so many pumpkins ?

Freya has that twinkle in her eye, but she isn't into pumpkins this year.....
Here is my bold and brave Cavalier, bless her. My very large and long nosed cavalier who is nothing like a King Charles Cavalier what so ever.. reference Amie Soto Blossom. THIS IS FREYA ROSE BLOSSOM

Just like us :-) x x x
For my friends so many miles away.. You survive to live another day guys and everything does dry out... honest.. I NEVER FIB ...


Lots of love and good wishes on ALL HALLOW's Eve x x x
Posted by Soggibottom at Thursday, November 01, 2012 8 comments: