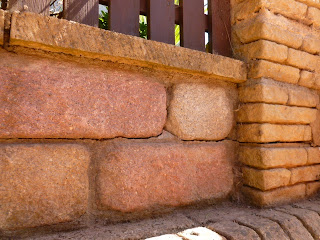 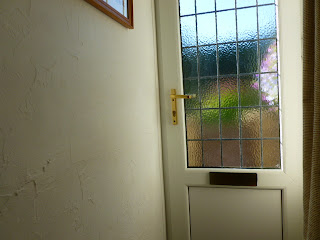 Some one here has lost the plot. it used to happen on Thursday morning. This week it was 8. a.m. on Monday morning.

She is as usual over at the CATFLAP CAVALIER.
x x x

Frogman found under the bridge at Soggibottom.


It's true, there was a guy all dressed up in a suit who went scuttling around under the little Medieval Bridge that we have to cross to get to Soggibottom Cottage.

Things aren't as strange as they seem.
Before the two hundred year cottage beside us was pulled down at the start of February, batmen came down here to check for bats. Bats only like warm places to roost, according to the batmen. As the old cottage had been empty for at least eight years it was unlikely they were there.

The frogman was surveying damage caused by heavy lorries crossing the little bridge.  A new water course had to be built after all the flooding that has been going on around us. Especially because of the new road that is going to skirt our village. New roads tend to mean more water one way or another.


The little bridge is one of the oldest places in the village, for all our efforts to try and protect it, the local football club and cricket club had stronger objections. They mostly play football and cricket at weekends, the lorries only work during the week. There was a plan for the lorries and their heavy loads to skirt the playing field at the back of Soggibottom Cottage. Instead the little medieval bridge that we use to cross the river was chosen for all the heavy loads.
Heaven forbid anyone upset the football club or village cricket club, or the Parish Council...


The cracks are defiantly beginning to show and not just in our newly cobbed cottage wall.


Being unable to get out of our own gate at times, wears you down after a while.


Constant dust and noise. Five months of it so far, Soggibottom often loses the plot on Monday after a two day rest from digging machines.
It helps to escape and leave it all behind during the day so thought you might like to see some of the places we escape to, to save our sanity.

Two Bridges in Dartmoor National Park ,  great place to clean a muddy dog after she has fallen in a muddy lake.


That's an AC Cobra under the tree's if you are a car lover.


It was worth a very large sigh and a closer photo.


Dartmoor is only about 14 miles away from Soggibottom.
I did say we lived right at the bottom of the hill.

Be warned, there are muddy parts around this lake... ask Freya Rose Blossom. 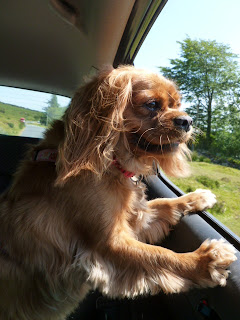 Soggibottom really has been out and about slightly more than usual, time is scarce so don't worry that we haven't been blog visiting, we will when everything calms down again.. IN THE MEANTIME. muttley is over at CATFLAP CAVALIER.
Watching what we wonder !

Last photo, we came across three dogs locked in a car this week...
One of us was about to make a call on our mobile phone, the owners came back before the call was made......... We aren't sure how long the dogs had been in the car.


Even though parked under the shade of a tree this is not a kind thing to do to your dog. Please don't leave your dog in a car in hot weather. If you can't take your dog with you, don't go........ or at least leave them at home in the cool..  That's it... Moaning Saturday over.
Have a great weekend :-) X X X 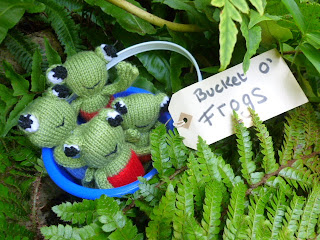 I love it when a plan comes together. Except no one told me that the little lad who the frogs are going to has a grandad who has a frog phobia.. Grandad has to deliver them like it or not.
These are happy little guys, won't jump around and get out of the bucket I promise !


A few weeks ago another pair of redundant jeans was lucky enough to be recycled into a rag doll. 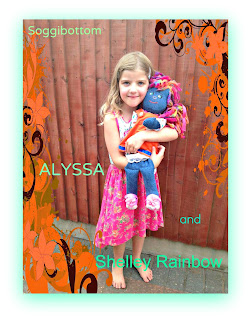 A little girl who loves the colour orange, loves the beach and loves collecting shells...

Thanks Alyssa's mum for sending Alyssa's photo with Shelley Rainbow.  As I said, don't you love it when a plan comes together. 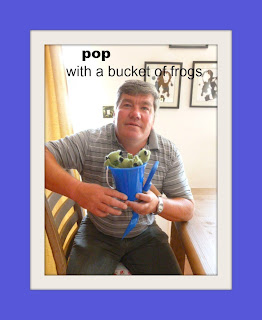 Pop will be fine.. He will probably lock the bucket of frogs in the boot of his car when he delivers them. How was I to know about his frog phobia ?
Giggled all afternoon, but SHH, that's between you and me....

Sitting just a few feet away from our frog pond in Soggibottom's garden this afternoon, we didn't like to say to Pop, frogs behind you.   We kept quiet....... 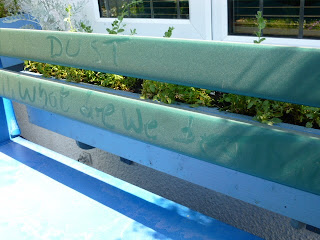 In the meantime. Dust and more dust. It makes us wonder what are we breathing in, let alone the guys that are working down here digging the new water course that is intended to help with our flooding problem.  The time line promised was 16 weeks. Next week we start week 19.............
It's a constant struggle, with red dusty clay. It floats everywhere,  keeping all windows and doors closed is a good thing. 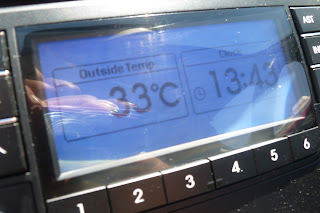 Even if the temperatures are high.
I really hope the new road that is going to go around our village is going to be worth it. The whole village is under a dust cloud. It's not just us. 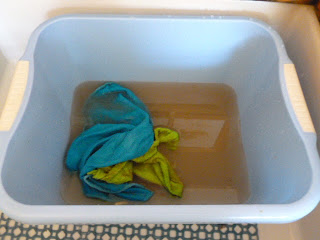 This is our daily dust routine. Wet cloths gathering red stuff. From the inside not the outside.
Thank heaven for weekends. It all goes quiet and the dust settles. 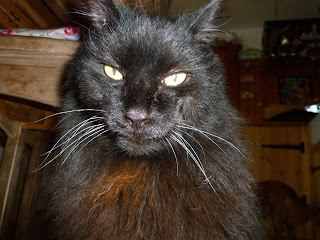 Update on Frankie de tabby. He is healing AND AS USUAL EATING.
We believe he has a pair of boxing gloves hidden behind the cat flap, just in case he has to defend his space again. He is fine and send his luv LUV'S. Thanks so much to everyone who has emailed and asked about him. Frankie de tabby lives to fight another day.


Miss Mutt has been out and about on the beach this week.  Click on CATFLAP CAVALIER. you can find her there.
Soggibottom hasn't been blog visiting over the last few weeks. We will be back and see you all again soon... promise x x x