George the third Cartwheel Penny has come back to the place where it was found . 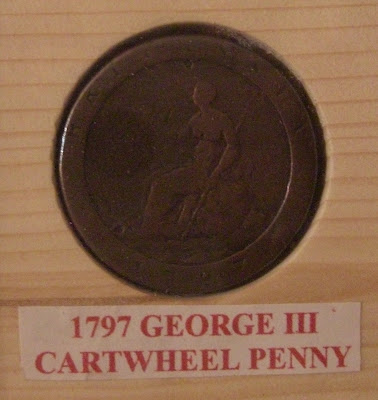 A chance meeting on the way to the village fete has in a strange way brought the penny back where it was found nearly 50 years ago. I know I posted the picture of this penny a while ago, but it didn't belong to us at the time.

The couple who renovated our cottage back in the sixties came back to live in the village. We just happened to follow them down the road to the village fete one year. Quite unaware who they were until they asked where in the village we lived. The story goes on a bit from there but at the beginning of the week we were invited to tea.

How lovely that they asked if we would like to put the penny back into the cottage.
It's not possible to put it back in exactly the same spot but it has been placed 2 yards above where it was found by the door.

Tonight, with the penny now in a frame we had the official "putting back ceremony."

Some of us looked on with enthusiasm.....and some did not!
Posted by Soggibottom at Friday, August 28, 2009

I believe the menagerie understands the protective power of the penny, and are very much at ease because of it.

what a great story...i have now followed this penny on its journey and feel just as happy for you, perhaps even more happy than some :)

Basically you can ask from your relatives and family members as well as friends where you can find cheap jerseys Men can feel like boys again and you forget about everything else until the game [url=http://www.greenbaypackersofficialstore.com/]Authentic Clay Matthews Jersey[/url]
over
ï»¿A stroke-play match [url=http://www.washingtonredskinsprostore.com/robert+griffin+iii+jersey+freeshipping-c-9_49.html]Robert Griffin III Jersey[/url]
determined by the athlete with the lowest total strokes for the eighteen-holes Th[url=http://www.seahawksofficialshop.com/]Russell Wilson Jersey[/url]
jersey was first used in a home match against Cleveland Browns