Oh, I see blogger have changed things again... new posting screen. I might mess up here, but will try my best. Here we go ...


First of all, my birthday boy, had a great surprise seeing all your beautiful comments wishing him a happy birthday. YOU KNOW WHO YOU ARE .:-) Thank you.
We had a day out instead of a birthday party, Tony does have a birthday cake that we have yet to shower with candles.
We have visitors on Sunday so it will be shared then. I promise to share pics with you.


We decided to go slightly further than we normally travel on a day out in the South West of England yesterday.
It was a special birthday, Tony enjoys driving so much, it was his special day, I left the driving to him.
We are lucky we live in a great part of the country, Cornwall and Dorset are within easy reach. We travelled 270 miles yesterday, there and back to Land's End.
We met Frankie de tabby as we crossed our little bridge back to Soggibottom cottage and home last night........... Little sneak, he doesn't normally go across our bridge. He wasn't just walking along the bridge, he was balancing on the edge, he is too old to do that.....

The cottage in the photo is at Sennan Cove in Cornwall.


So was this one, just along the street. A new thatch. I never really noticed the thatch, I noticed the Collie dog. He obviously belongs to the Thatcher and is used to hanging around. No cookies in my pocket either !


I'm sure someone will tell me I am wrong, we have so many thatched cottages in Devon that they now go unnoticed by us. To have a thatched hat to your house can be very expensive, the insurance premiums double for a start. The fire aspect doubles. The normal life time for a thatched roof is roughly 25 years.
A thatched roof on an old cottage looks stunning. I have a feeling because this particular house in Sennan Cove is right beside the beach the life span for this particular thatch is shorter than 25 years.


Sennan Cove has narrow streets as most of the Cornish villages do.....  Devon has very narrow back lanes. We know most of them.

Sennen Cove doesn't allow dogs on the beach at certain times of the year... OUCH... beautiful beach and all that sand too.


The people that actually live there aren't great with tourists either. Can you tell ?


We moved on further down the road to Land's End.


It's 34 years ago since we were both at Land's End. It's not the place we remember.


You can still pass the last and first Inn in the Country.


It still has a rugged coastline.


There is still a guy there changing the sign post. You have to pay to have your photo taken showing how many miles it is to your home town.


It's still the same rugged coastline of Cornwall.


We moved further along the coast nearer to home and came across St Micheal's Mount. Here I know I should have done some homework to tell you about it, I was never a good student. But I will find out and tell you another time. There is a causeway that you can walk across from the mainland to the Island at low tide.


We were there late in the afternoon just as the tide was turning so there was a dash for the mainland.
The alternative was to wait for the ferry or wait until the tide turned and it was low enough to walk over the causeway.


You can tell by the leisurely way Tony's hands are in his pockets, we made a frantic dash. 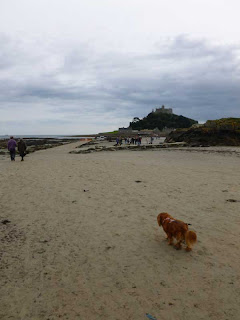 This beach also has a dog ban at certain times of the year...Although the causeway over to the Island is a footpath, so dogs are allowed along it, just not on the beach.. Lucky for us there were workmen on the causeway and Freya had a run along part of the beach... No stones to throw and catch, she wasn't happy....

That's my girl.
Freya can be found over at Catflap Cavalier. with her own photo's and point of view..

Phew, think I might have got away with that lightly ref a post from a new layout from blogger... HEY GUYS.. well done !
ALTHOUGH... YOU STILL HAVE SOME BUGS and WHY DO YOU KEEP CHANGING THINGS ?

Thanks guys for all your good wishes for Karina... here she is out of hospital with her new pup Stella.


This is the photo Karina agreed to let me show you, the other one with Stella in her arms was too good not to show you too. Karina is now on the road to recovery, we can also say that she had good news from her hospital results today.


Lots of hugging and kissing and big sighs. Jake and TIlly May were kissing and hugging on Wednesday when we went to visit.


Lots of kisses from Freya to Mr Chops. Freya never needs an excuse to give her kisses away.


Now it's time to catch up on all the things we haven't been doing.
It seems as if it has been a very long road over the last few weeks.
I promise to catch up with everyone soon.


As for Stella, Karina's new little pug pup, we think she is going to have a very happy time in her new home.


As for our beach babe, looking at Freya here, you can't help but wondering what she's thinking, "IS IT FRIDAY".. I'm sure you can think of a better caption.
Freya is over at Catflap Cavalier with more pics of Stella and Mr Chops... and more pics of Freya Rose Blossom, we might have to change her name to the laughing Cavalier.

Labels: IS IT FRIDAY

Exmouth, South Devon and the end of Summer

Karina our daughter is still in hospital, there is a chance she might be able to look in here.
We thought we would give her a view of the beach we visited on Friday. Much better than looking at a hospital wall.
Thanks for all the good wishes guys, good thoughts and love are always welcome.


All that sand to be dug.. Shame the tide was coming in. This is one particular beach that you have to be aware of incoming tides or get cut off by the sea.
It was time to go home before Freya really got her sand claws into action.


We did stop along the way home though, this is a view looking along the river Ex from Topsham towards Exeter.


View to the sea. Exmouth on one side Dawlish Warren on the other.


We were back at Dawlish Warren this afternoon.

Thanks again for all your good wishes for Karina... WE LOVE HER LOTS.


Freya Rose Blossom can be found as usual over at CATFLAP CAVALIER.

The power of the paw 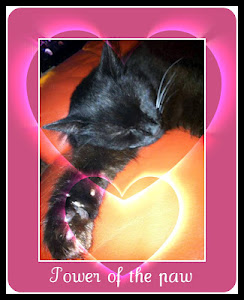 The power of the paw, doesn't mean that you have to have paws you know !.....