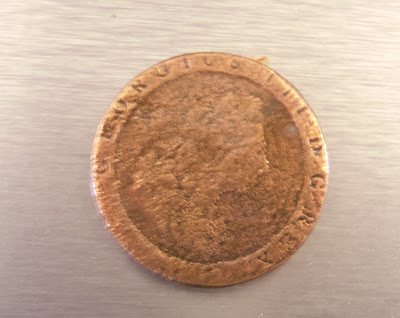 This is a cartwheel penny, found under our door when the cottage was rebuilt in the 70's. The penny is dated 1797.
This very penny came back into the cottage 2 days ago.
Large and heavy, I can't imagine saving many of these in an old sock.
You would have had to have a huge piggy bank. 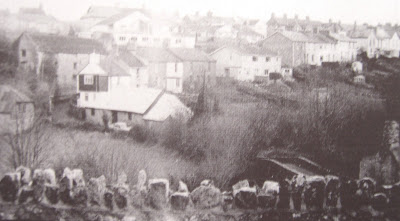 The paper work we have about the cottage dates back to 1668.
At the time it was a main road. That's the single track bridge in the picture we still cross to get here. You can just see the cottage in the bottom right of the picture.

An ideal place for a Smithy and we understand that is why the cottage was built.
From the amount of horse shoes and nails we still find in the garden maybe we could re- start the business. 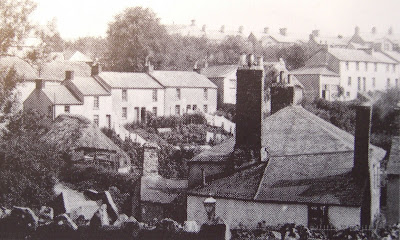 Over the years the cottage had another house built onto the side of it. It was removed in the late 1960's as it began to be unsafe.
This is a picture taken about 1900.

Soggibottom cottage is still there. That is our chimney in the middle of the picture.
The house had at some point been made into two cottages and at one time a family of 13 lived here.
The spring is still here and now we have gas and electricity and running mains water.
Before anyone asks.......

The downhill slide for the cottage took a few years. It became one building again.
Made into a store and builders yard. 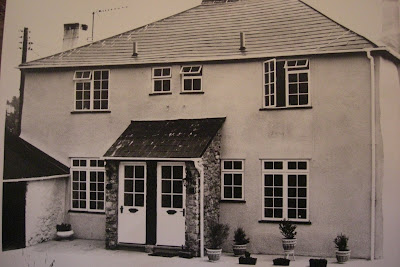 Until the builder decided to turn it back into two cottages once more.
Finished cottages 1970.
We know it took 30 tons of sand to re render the outside. Most of the original features, oak lintels over the windows were taken out by order of the council. AWWWWWW!
How times have changed, now they wouldn't be allowed to have taken them out.


I feel I must now edit this slightly as one kind soul out there has noticed that we had the date on the penny wrong. I have amended the date to the date that is on the penny.... 1797......


Next posting how it is today.
Posted by Soggibottom at Wednesday, July 08, 2009

Midge, that coin is fantastic! I don't know if I ever told you about my dad's coin collection, nothing spectacular, but we always enjoyed finding coins from different times and places.

What an amazing find. And how generous that the previous owners gave it to you. Lucky lady. Keep it safe!

I am loving your cottage entries, it's so exciting to find out about the history of people, places, and even individual buildings. Fantastic. I have said you live in a beautiful place, but to know at least part of the history of your own home is pretty darn neat if I do say so myself.

Well, you know I could ramble on! Haha. Perhaps we'll continue a conversation about this later. *Mwah* to you and the rest!

I'm at present writing a magazine article about Cartwheel Pennies (and 2d's). Here's as odd fact: they remained in circulation until well into Victoria's reign, popularly known as "omnibus money" because everyone got rid of them by using them to pay bus fares.
By the way, the date on yours is 1799 - the year they were first minted. Cheers. Ed

Sorry fletchnews.....one of your magazines might have had their information wrong.....the date on the penny is 1797......thanks again for all the interesting facts though.

Any company that introduces a new product will hire people to try it out before it is introduced to the market Maybe I will wait till I get the raise, the career, the job, the relationship, the hairdo, the body, the car, the house, the whatever, and then my life will be perfectIn most cases, you can double-click on your photo file and it opens Windows Picture and Fax Viewer Receive 6 valuable, complimentary BONUSES when you have a delightful, hour long, expert Angel Reading with Catherine and the Angels of Abundance
I summarize the 'decoding' since it was not dependent on microscopic cross-sectional analysis of single marks but on a determination of the changing strategies involved in a complex sequence of visual, symbolic, problem-solving?This will increase your ebook's perceived value because you'll be giving your customers a way to make money with your ebook To market effectively you must make yourself repeatedly visible to potential clients and referral sources so that they get to know and trust you1

" (Revelations 6:5-6) 3 quarts of barley are also considered just enough food to get by on To receive a free report on "What Coaching can bring to your life" contact Antonia at=You've picked out the perfect puppyWith most people, regardless of the industry you are in, in some way you do change livesThis can be done and save crops from ruin in the event of a huge storm which threatens to ruin the entire seasons crop