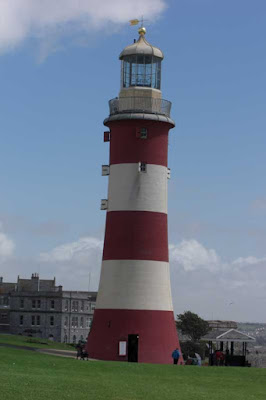 Smeaton's Tower is on Plymouth Hoe.
When you want to have a good view of the Firework competition that's held every August it's one of the best places to be. 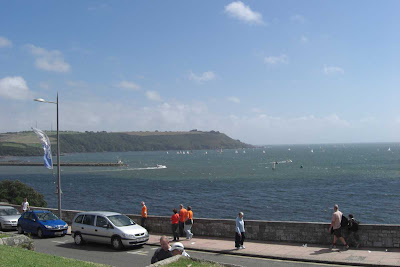 The day normally starts off calm over Plymouth Sound. 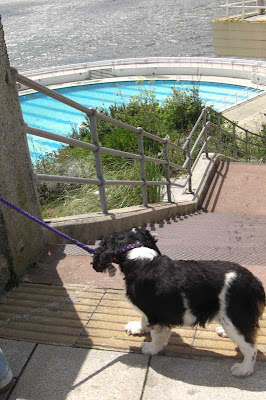 Some of us don't do heights very well. 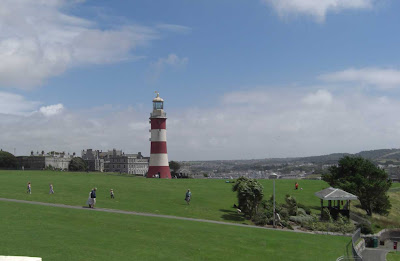 Then as the day goes on, more and more people arrive.

The tower was built on the Eddystone reef in 1759 but taken down in the 1880's.
As the sea was wearing away the rock it stood on.

About two thirds of the tower was moved stone by stone to rest on the Hoe. 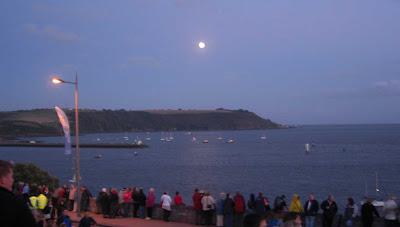 Before you ask about Amie Soto Blossom, she went home before it got dark.
She missed all the fireworks.


Amie is profoundly deaf, the fireworks wouldn't have bothered her.
There were so many people that we didn't want anyone to tread on such delicate posh paws.
Posted by Soggibottom at Friday, August 13, 2010

Labels: I wouldn't like to be the judge of that.

Too bad Amie missed it - but it was just as well. I love fireworks but I am always amazed at the dog owners who don't understand that the noise is much worse for the dogs.
At least Amie got an outing.

VERY nice, Midge - I love fireworks, and that looks like the perfect spot to view them! Glad Amie got home before someone stepped on her.

What a wonderful place to see fireworks.
We have them all over the state at the different beaches, but the crowds are too much for me.

WOW that is really something that the tower was moved stone by stone.
I can just imagine how awsome the fireworks were.
Good that Amie was safe at home getting her beauty sleep. She probably could not have enjoyed it as much as her mommmy and daddy did.
love
tweedles

I love a good firework display but since owning a dog that used to go into complete and utter blind panic at the first pop, I've come to spend my time worrying more about the animals around rather than enjoying the spectacle. Lucky Amie having responsible owners!

nice to see the lighthouse without scaffolding! it's been covered up the last few times i've seen it but it looks great..we must go down that way soon xx