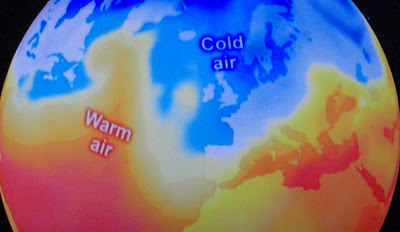 I am not being lazy, thought you might find this map of interest
It says all about the big freezy fingers that we have had. Soggibottom is there in the blue. 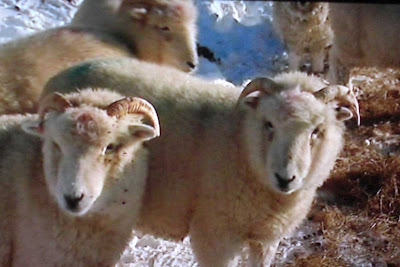 Ask the sheep on Dartmoor if they really love it. 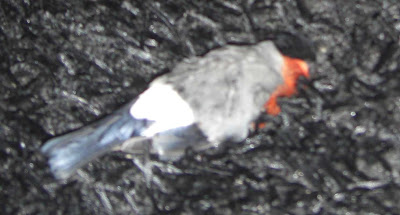 Going to into the kitchen last night. I found this....aw...... it was really very cold.
As the cat flap had just banged and "someone" looked rather pleased with himself not too sure if he had found it or it had been roosting very low in the bushes outside. It was late, birds aren't around after dusk normally.

To think he had retired..... as you see he wasn't hungry for bird.
Even such a pretty one as the one he brought in . 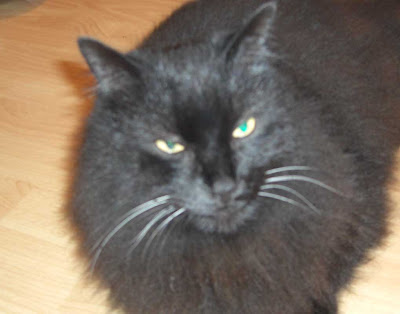 Shame on Frank. None of mine have ever brought in a bird. I do think I was gifted a wee mouse once though. Not yet on its last legs, someone took it across the street to be revived in peace. Our news yesterday did show that the whole of Britain was under a snow cloud. I did think of you.

I had a male cat like that, bought me goodies, from time to time and did not understand, that I rather have them breathing;) I love two kitties to coyotes, so I do not let mine out anymore.

Brrrrrr. Those sheep don't look happy! Naughty Frank - maybe he thought the bird would like to come in and warm up? Haha.

Emailing you as soon as I frost my chocolate cake - yes, it's after midnight!

Funny, I haven't seen a bullfinch for years and we had two in our garden last week, and now Frank's victim. Must be the snow bringing them out!

a frosty hello to you my dear friend. i am back from holidays where it is far from frosty! your pictures are simply stunning and the snow looks so inviting to me as i have never in my adult life seen snow.
hope you are staying warm
xxrosey

Bad Frank! I had t ospoo kour birds yesterday becaus eth ecat from over the road was eyeing them through the gate.

Love the map. Sheep look fed up. Its reached +1 here today but there is a wind