How to felt a Teddy bear PART TWO 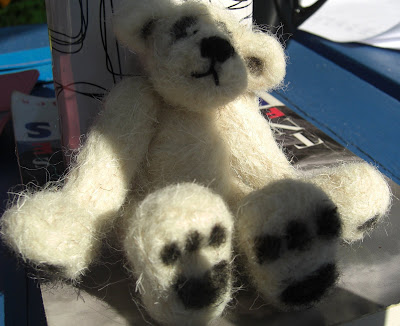 Make sure you jab your felting needle into the wool and slightly into the sponge. This makes your work felted firmly all the way through. After a while your work will take a more dense appearance and you can sculpt the wool by the jabbing action.
After jabbing and turning......... 1 head in an oval (egg shape), 1 body into an oval, 2 arms and 2 legs into sausage shapes. Don't forget your 2 half moon shape ears. Don't felt the bottom of the ears too much as they need to be attached to the head.

Your bear needs paws on his feet and arms, the way I do this is to lay the sausage shape felted work on the sponge and turn the end of the sausage shape up to a right angle to the leg. Needle felt from the heel back down into the length of the leg. It should give a good bend for the foot/paw.

Head
The bears eyes are going to be placed about half way on his head.
With your needle jab and jab at the place you want to put the eyes.
You should end up with a dent.

Eyes
Thread a fairly long piece of thread onto a sewing needle. I have used black no.5 embroidery thread on this bear. Enter from the base of the head and place your needle where you want the eye to be.
Leave enough thread at the entry point to tie off.
Here you can use teddy glass eyes, but black beads are fine. I've used two black beads that are big enough not to get lost in the felted head when they are slightly pulled tight.
Place your needle in the eye socket and go straight over to the other side of the head, moving the needle through the head and your felted work. (Does that make sense?
Yes sounds o.k..... well I understand..... but then I've done it before.
Take your needle back down through the felted work into the base of the head and tie off using the bit that you left dangling when you started. Don't pull too tight, but tight enough that the eyes don''t move.
Remember that I have used beads here not teddy glass eyes. Teddy glass eyes need to be placed slightly differently. You will have to email me.... it takes a bit longer to explain. 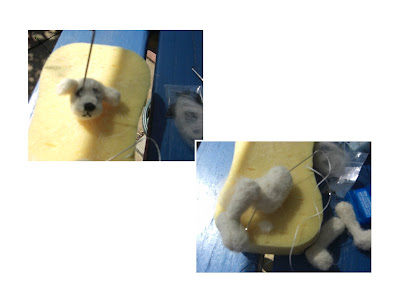 Ears.
Your half moon shapes need to be placed where you want your ears to go on the head. To attach them to the head isn't so hard as you think. Take two small pieces of wool from your wool wad and felt them slightly. Place your ear and lay the small piece of felted wool on top of the join. As you haven't felted the base of the ears too much you should have whispy bits at the base that will help to bond into the head. Felt the extra wool into your ear and head. Jab actions. So you sculpt the ears onto the head. They have to be reasonabley firmly felted on. Don't want them to fall off.

The nose
Thread your sewing needle and go in from the base of your bears head. Leave some thread to tie off. Go backwards and forwards a couple of times to the nose and back again. This will help to anchor your thread. I have used the same black No.5 embroidery thread. The nose can be any shape you like. I find it easier to start in the middle of the bears nose using satin stitch up and down. Do one side first and then take your thread back to the middle and do the other side. The mouth is normally an upturned "Y",
When you are happy with the nose and mouth take your thread back to the neck of the bear where you have left some thread hanging to tie off. 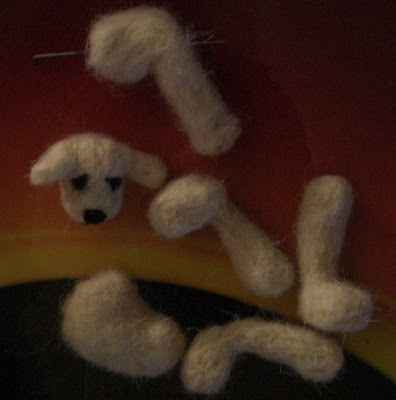 Attaching arms, legs and head to the body.
Nearly there...
I've used dental floss to attach the limbs. It's easier to use and in the colour wool I've used it doesn't show. Although it should get lost in the body and it shouldn't be seen anyway. 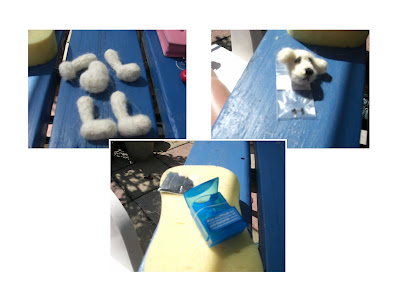 Most people will attach the head to the body first. But me, being me, I like to put on arms and legs first.
Thread your needle with dental floss. You can use any strong thread by the way.
Enter from the bottom of the bears body leaving enough thread to tie off. Work your needle to the place you want your bears leg to go. Place the leg to the side of the body and take your needle right through the leg. Then back through the body to the other side where you want the other leg. Take your needle through the leg and then back again into the body. Do this a couple of times and make sure that it holds the legs firmly. But don't pull so tight that you distort the legs.

To attach the head. Another reasonably long piece of floss, into the base, between the legs. Leave enough to tie off. Take the needle up to the neck of the bear.
Place your needle through the neck (underneath bit where you tied off the other thread).
Take the needle through the head to behind an ear, then go back down again the whole length of the bear. Go up through the body and the head again bringing your needle out behind the other ear. Go back down the whole length of the body again.
Tie off your thread and lose it into the body of your bear.


You can refine your bear with your needle. This is only supposed to give you an idea how to do it.

Going to post another PART TWO and a bit. So you will have to read that.... and look at more of the photo's .

Hello Lovey! Thank you so much for posting your tutorial. I know there are others out there but it helps to have several to refer to. I like the idea of using an old sponge instead of buying a felting mat. I suppose one could use a folded towel as well?

Either way, your tutorial seems to be "Bunny-proof" so I will give it a try sometime! I'll let you know how it goes when I do get around to trying (though I'm sure you'll hear all about my poor needle-punched fingers hehe).

Also, I won't enter your giveaway since I already have one of your bears! I must make it fair for everyone else. :D

I never said OLD sponge, it was a new one ha ha.....you will need something stronger than a towel.... needles are sharp little blighters, be warned x x x