How to felt a teddy bear PART ONE 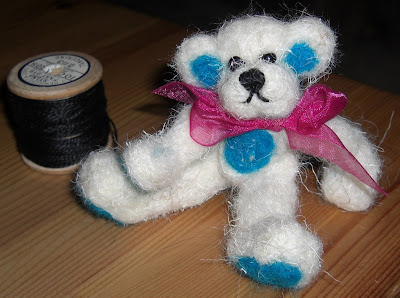 I promised a while ago I would tell you how to felt a teddy bear. The one above is unfinished, but you get the general idea how big it is. You don't have to make huge bears. Smaller ones are just as fun.

You need the right tools. Wool to start, go into a craft shop they sell fantastic dyed wool in a multitude of colours. I prefer to have natural looking wool, so the bear above was made from combed wool tops from Wales. The blue is the beautiful dyed stuff you get from the craft shops. 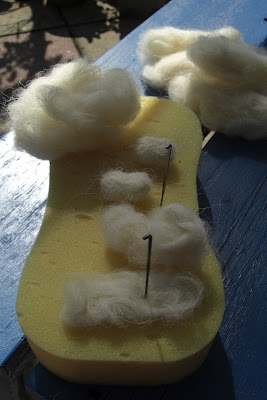 One more thing you need. You need something to work on that the needles will go into, rather than stab your knees and your lap. I use a car wash sponge. Don't worry if you get bits of sponge in your bear it all blends in. 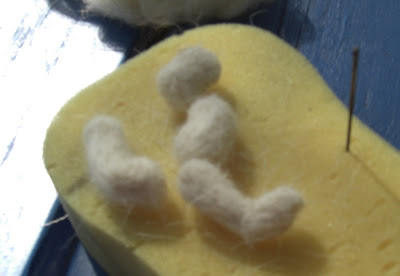 Break off a small piece of wool and scrunch it up so it will fit into your hand, this is going to be the bears body. Break another smaller piece and really scrunch, this is the bears head. Do the same with 4 other pieces of wool, keeping them roughly the same size. Legs and arms. Also 2 bits for ears.

Lay your first piece of wool on the sponge and jab it. Do about 5 or 6 jabs along your wool. Don't forget to keep the needle straight in and straight out.
Turn the wool. If you don't you will end up with a flat piece. No good for bears.
Jab five or six times, turn, jab and turn............your felting.

After a while the wool will start to change and you should find a slight resistance with your first needle. Change to the *40 and it should now become easier to felt. Not forgetting you need to keep the needle straight. It won't do ANGLES..

The aim is to felt the wool, jab and turn, so you end up with an oval, Do the same with the body.
The legs are slightly different you need 4 sausage shapes. Two smaller for the arms and two for the legs. Felt the ears. All in the same way, jab and turn on your sponge.
The ears need to be flatter, so don't turn them so much.

How am I doing?

Have to go and help water the garden, but PART TWO I'll explain how to put the bear together.
Posted by Soggibottom at Saturday, May 30, 2009

Labels: bear with me

It is so neat how all of that soft, pliable fluff becomes solid and firm by simply hooking at it with needles!

Useful information ..I am very happy to read this article..thanks for giving us this useful information. Fantastic walk-through. I appreciate this post. valentines teddy bear