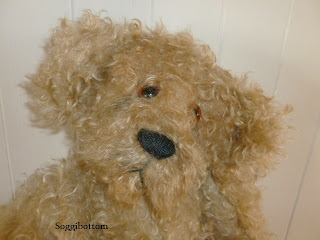 Ted isn't quite finished, but near enough to be to show you the mohair I dyed with red onions a few weeks ago. The mohair I used was white, beautifully soft and quite straight, after joining the red onions in the pot, it now has the perfect curl and the colour. I've wanted another bear like our bear in the cottage window for a long time. The only difference apart from the mohair is this one is slightly bigger, I've also shaped his face slightly and he has larger amber glass eye's. He is also very softly filled to give him a cuddle me look. I've not taken any mohair away from his face, I've left him with whiskers intact. 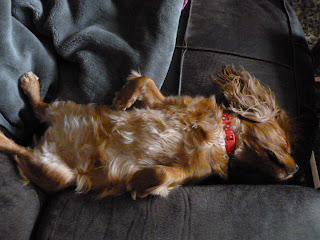 As you can see it's been a whirl of activity around here this week. 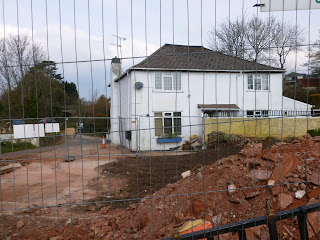 The old yellow cottage has gone. The new spoil heap is, however still there. 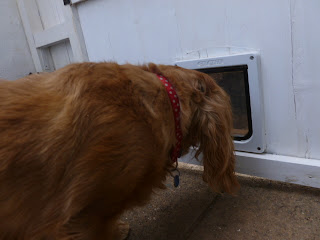 There has been a slight improvement on the view from the kitchen window this week. 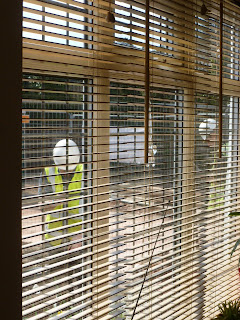 Freya's joy, thinking her demolition friends were back was short lived. 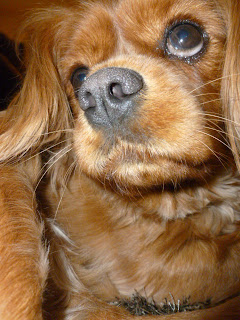 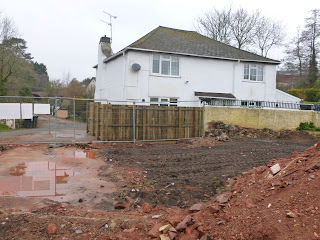 Instead we had a couple of guys who installed a new fence. Great, it hides the spoil heap.
What we can't see from our kitchen window we aren't going to worry about.The fence is great, not sure about the colour, but that can be fixed. Unfortunately the fence is a standard height and not as high as we had hoped. There are ongoing discussions about adding a strong trellis to go on the top. 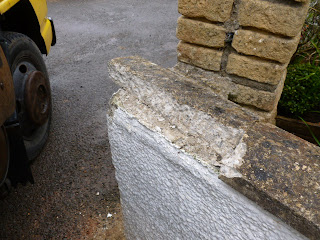 Stone coveing goes on top of a part of our wall in the front of the cottage. At least it did and used to be in one piece. 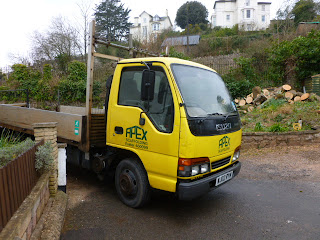 After weeks of lorries coming and going it was only going to be a matter of time before someone knocked our small wall. WE KNOW WHO YOU ARE. The lorry came to collect some scaffolding poles. After being loaded, the driver then went to start the lorry and it promptly broke down. No quick getaway after all. 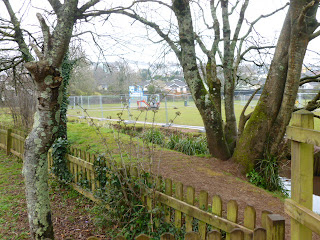 On the other side of the stream, new fences are going up in the park 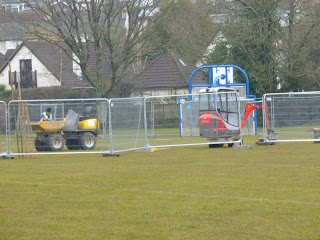 Digging machines have appeared. Not a moment too soon because as soon as the children's playground has been moved, hopefully they will then start on building a new water course for when the stream starts to overflow. 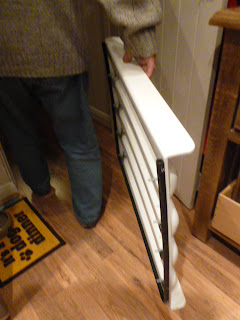 We have flood warnings again. Out comes the flood gate. Karina's felt art has now been properly framed. Fixed to the wall securely this time. 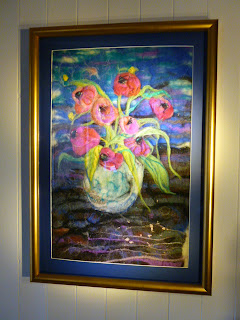 The framer was quite right, it looks so much better in a wider frame than the one I suggested. 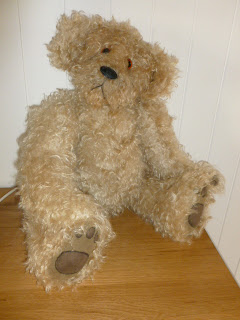 Freya as always can be found over at the CATFLAP CAVALIER. 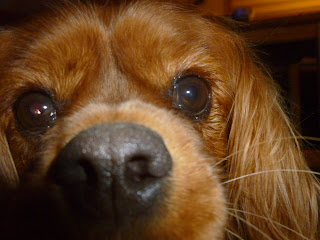 We are all making the most of a quieter week. See you all soon.
Posted by Soggibottom at Tuesday, April 09, 2013

It sure looks like a mess, be nice when it is done. I love the frame they used for Karina's piece, it really looks beautiful on the wall.

The frame looks perfect on Karina's art...lovely. Your new teddy is adorable. I love the colour:)

Looking at adorable Freya and Karina's wonderful art work drowns all the chaos and noise and rubble outside your lovely cottage! Take care
x

Love Ted is he getting clothes? Karina's picture looks great.

Enjoy your quiet week. The felt picture looks lovely as does teddy. Have a terrific Tuesday.
Best wishes Molly

Love the bear and Karina's artwork looks fab! Hope they hurry up with the digging. xx

Your Ted is just adorable! He certainly does have a cuddle me look!

I do love Ted, he is such a lovely and loveable guy!

The red onions made magic with the mohair.

Karina's art is so beautifully framed. They did a wonderful job!
We love Ted-- so adorable!!!
And he looks happy!
We hope all the outside work gets done very soon... and I told the rain to leave you alone!
love
tweedles

What a cuddleworthy ted! Karina's art looks great framed - don't knock it off the wall this time!
Must be nice getting back to some semblance of normality after the past weeks of disturbance!

Oh my goodness new Ted is gorgeous - just want to smooch him! Glad you have a fence now, but are they going to fix your wall????? We're having flood warnings here too, mum got all her stuff off the basement floor. She's had a flood a couple of times, mostly when the sewers back up, ewwwww.

You are so dang talented! That bear is precious.