how do you stuff a Dartmoor Hare into a box .....Mel's TED


It's not easy to stuff one of Soggibottom's Dartmoor hares into anything... but a shoe box will do. 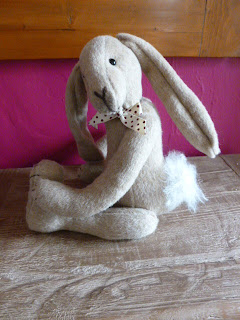 
I tried hard... poor little guy ended up with his legs high in the air.  At least I know he got there.


This is a little guy I named Robin.
I don't often name bears, but Robin has a sad story, not one that I can share at the moment.
He is a bear that was made at Soggibottom.
Not all of the bears that travel over the bridge get named or blogged about. 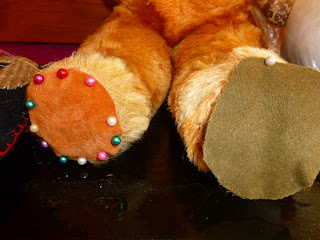 Most come here needing some TLC ... paws and claws. 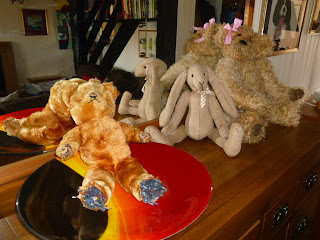 
This is an after pic. I gave Ted cinnamon colored paws to match his beautiful mohair.


Ted.. well obviously, his name was Ted.. came over the bridge a few weeks ago. No paws, no claws. I'm not a great believer in trying to mess around with something that could be changed. Sometimes Ted's should be left just the way they are. Ted's owner trusted me to get him back to her looking like her TED.. I could have taken his arms and turned them inside out putting in new paw pads, same with his feet. but why try and mess around with something that doesn't have to be fixed. Ted's owner wanted Ted back, looking slightly better than he was with paw pads and feet so he doesn't have to wear socks and mitts. 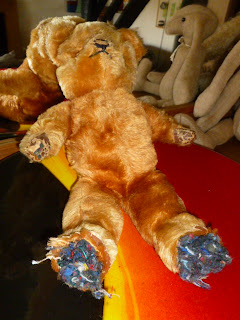 He also needed a slight nose job. Again, don't dabble and mess around ... Ted needed a bit of thread onto his existing nose. Nothing more.
I slightly pulling his nose and snout, the last bit of wood wool that he had left into a position that it would have been.
I see so many people on blogs that mess around with bears too much and ruin them.  I  have come to realise you don't have to fix something that is not broken, just a slight adjustments is all it takes to bring a ted back to life and give him or her a few more years.  At some point this little bear has been taken to bits, he still has his original cotter pin joints. please do not ask me how I know that :-) ....
I believe Ted to be a little Dean's 50's bear. If anyone knows different.. please let us all know.. without verification of a label an expert will hedge their bets.. I am not an expert and never say I am..
Ted also has a music box added, not original. I made slight repairs to his legs and back.

Ted is a beautiful little cinnamon colored bear, I have given him new orange paws, sewn him up a little where he needed it, stuffed a bit on one of his arms.. I have tried to pull his eye's forward.... only slightly because Ted's owner would hate me if I were to alter him to much..At some point, Ted has had new eye's. Pulled too tightly, but I am not going to mess around with them because............ Ted's owner wouldn't thank me.
I would alter the eye's if Ted were mine, but he isn't my bear.

He has also been stuffed with cut knitting wool instead of wood wool that I found near his nose.
Ted on the whole I believe to be a little cutie because he has so much mohair and some of it in his original colour. He's a loveable little guy that has been in different rooms of the cottage over the last few days.......... HE IS LOVELY. I want him. Not going to get him.
His owner is coming tomorrow to pick him up.. I hope she is pleased with him.. It's been a strange week ref ted's here at the cottage. Some have gone out, some have come in. 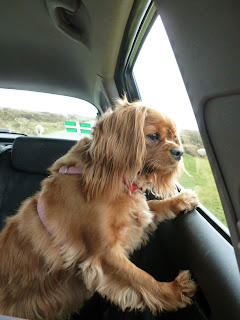 You know the feeling of wanting what you can't have. In Freya's case it is a Dartmoor pony.
She is over at her own blog catflapcavalier.

I am so sorry I never had the camera when she met her best friends the demolition guys this week.
They were working on another part of the NEW ROAD... we saw them and stopped.
In the mean time ...


We hope that there is something we can put to rights, last year someone who will not be named...........


There was a bad deed.. a very bad deed.. one that has to be paid for.


Out of our kitchen window. LOW AND BEHOLD a different view.
The new Robin family are going to cost us heaps in mealy worms. ONE OF US...

We have so many things going on around the cottage at the moment.. BEAR with us. .... thanks for all your comments on Soggibottom's blog. We have one more day of peace and quiet, we have had a week or two or respite, then it all starts again.. Ah, don't worry, we will let you all know.


Better than a yellow wall any day.. the sand bags have now found a home. It's going to be covered in a red dust over the next few days, doesn't matter, as long as the Robin's can fly in and out. For all that has happened over the last few days, this is just a silly thing.
What was that.... storing tanks of fuel over this side of the bridge.. do not think so, a fire engine is too big to come over our bridge.. What makes you think your lorries can make it... ?
No fuel this side of our little bridge..........
Take care guys, thanks so much for all your comments,we will get back to you all.
Have a restful peaceful Sunday.............  X X X
Posted by Soggibottom at Sunday, April 21, 2013

Your bears and bunny are wonderful characters, they need names.

You have been a busy bee! It's a good thing to be busy :)

How wonderful to have become a D.B.
(Doctor of Bears). I do a little of that work, but claim no speciality in it, I am not a B.D.B. like you are (Builder Doctor of Bears, only a P.B.(Patcher of Bears.) Your work is noble indeed.

He looks like Little Ted from Playschool..now I am showing my age!
Our Hare was none the worse for his trip while stuffed in a shoe box and now presides over us in the living room, beautiful chap that he is.

The fence looks lovely - well done! Sounds like you have been having some fun this week - did you have to lie in the road to prevent them invading?!!

By the way, one of my tomato plants has flowers.....

Wonderful work. We loved bunny. Hope you are having good weather now. We have but we are very behind in the garden. Have a serene Sunday.
Best wishes Molly

ted looks great all spruced up. Love the hare. But then I would.


The fence looks good too. We spend a fortune on meal worms too.

We just love the cottontail on the hare!

Love ya lots,
Mitch and Molly

I think the little bear feels so much love from you,, and he thanks you!
love
tweedles

It sounds as if you've been very busy lately. It's true that those stuffed friends whether they be bears or bunnies or piggies each has a personality of his own. You're doing god work.
Sue