How to protect a Medieval bridge in the year 2013 Open Access to Stonehenge. 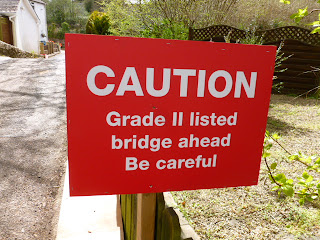 It seems strange to think in the year 2013 the only thing protecting our little Medieval bridge from damage by lorries with heavy loads passing over it, is a sign and a few bits of ply wood and paint. 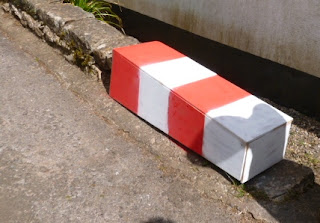 So much for the hi tec world we live in.
The best thing about these plywood and painted boxes is that at the end of the day they can be taken off, I suppose that's just in case at the end of the day when all the work crew have gone home kids passing might just toss them into the stream  ??
Well, with such hi tec safety equipment you never know, it pays to be careful with such an expensive defence. 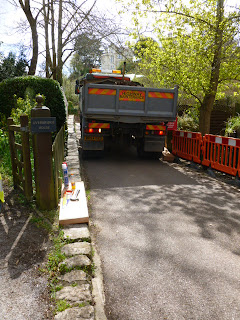 It's been noisy with traffic coming and going past Soggibottom cottage this week. 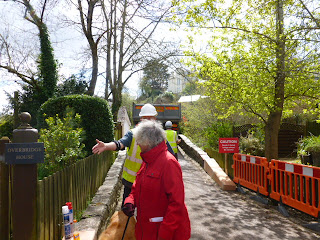 There is a pedestrian right of way that goes over the bridge past Soggibottom Cottage and around to a large park. Apart from the sign that tells heavy traffic to beware of damaging our little bridge, there are no signs warning anyone else of all the comings and goings of lorries or men at work building a new water channel.
The water channel has to be built because when the new road that is going to by pass our village is built there is going to be more water heading our way down the hill .... 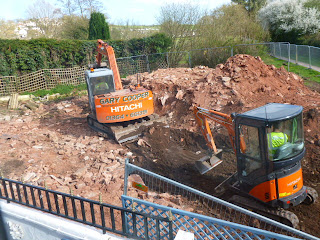 There is a tourist attraction in the South West of England called "Digger Land". We have a digger land all of our own and we don't have to pay an entrance fee.
We could have spent all day watching one large mound of an old cob house being moved from one place to another.. One of my saying's.. "really interesting NOT.. " Why move it from one heap and build an exact one a few feet away ? 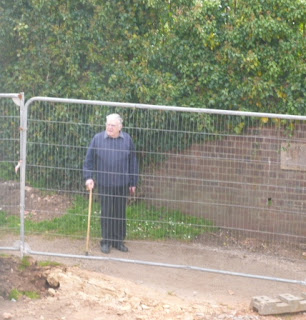 No signs saying beware of heavy vehicles or "MEN AT WORK", on the path on the park side either. 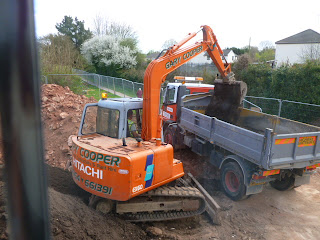 I suppose it's fair to say new machines and the new work force have only been back for four and a half days, so many other things to do rather than put up safety signs for Mr and Mrs Joe public. The half day was another story last Saturday morning. 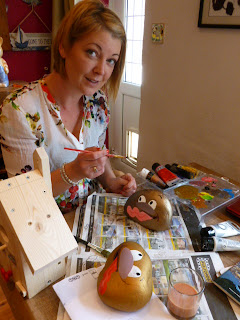 At least we have an excellent distraction from all that has been going on around us over the last week. Karina came to stay for a few days. Karina has been painting new bird houses.


She also put her own humour and thoughts about the work that has been going on around here in art form. Rock painting. 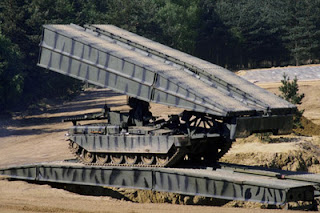 For everyone who has asked in Soggibottom's last post.
This is a Bailey bridge. The tank underneath carrying it along is a Chieftain tank bridge layer. The Bailey bridge on top unfolds making a bridge crossing. I am told it's quite unbelievable to see it all unfold.
An Ex British army Sargent also told me the combined weight of tank and Bailey bridge in the photo above was probably about 60 tons.. hum, well past our bridge's 40 ton new weight limit. To think only a few short months ago our bridge weight limit was 7 and a half tons..


The wonders of new technology and new builds.


On Sunday morning we passed Stonehenge, it's one of our favorite stops on the way to see our kids. One of Freya's favorite stops too. A new visitors center is being built about a mile and a half from the Henge. The idea is to put all the surrounding land back to open space and close one of the roads that pass right beside the Henge. A land train will, in future take visitors to see the stones. At a price of cause.....Open Access to Stonehenge. 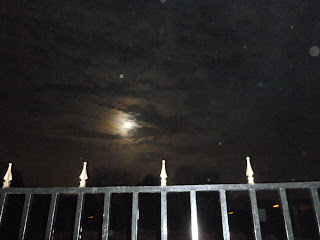 Time on this side of the bridge to put up defences and defend and look after the places we love. 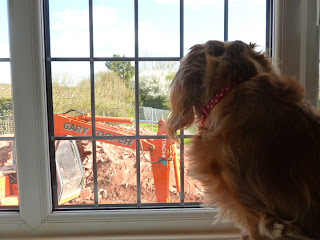 Freya can be found over at the catflap cavalier. 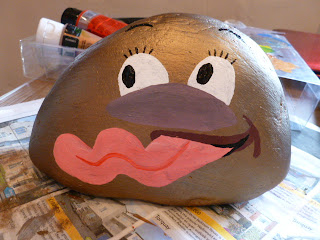 I'll leave you with another of  Karina's master pieces... to dust and noise. See you all soon.
Posted by Soggibottom at Tuesday, April 30, 2013

What a mess and a nuisance for you. Time to enjoy being outside and they are in your way, lol. Love the bird houses that Karina is doing, those are fun.

So much upheaval going on around your little cottage - hopefully it'll all be worth it in the long run once the project is all over! Oh dear - all that noise and dust and change! Yikes!

It seems Midge that this has been going on a very long time.. Poor you guys.. Love her work and see she is as talented as her mama.. xo

Hi we are here looking at all the photos and reading- all we can say is WOW!
We do love Karina's birds!
love
tweedles

Oh my goodness, it's been all go where you are then! Must be a real pain, especially with the warm weather but you can't have windows open etc because of the dust.
Glad to see you put Karina to work....

Hope your little bridge stays safe and that all the upeaval means that next winter you won't have problems with flooding.
Great work Karina!

Poor little bridge. We hope they crack on real quick as it can't be nice and now when the weather is warmer you can't open the windows because of the dust and noise. Sigh. Have a wonderful Wednesday if you can.
Best wishes Molly

What a headache all of this is for you!
We love Karina's rocks and we hope we get to see her painted birdhouses!

Love ya lots
Mitch and Molly

Wow are you having a disruptive spring, Midge, I hope they're not at it all summer and that they don't damage anything. Love Karina's masterpieces, what a doll she is.

Your poor little bridge. I hope they finish soon and you get your nice quiet life back again.