How to move a track vehicle over a Medieval Bridge 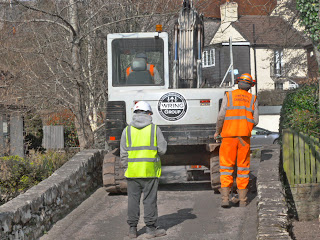 How to move a track vehicle over a little old Medieval Bridge ?
It's something that is done very carefully.


After weeks of having the company of the demolition crew next door.


Seems as if Frankie de tabby and Freya are going to have to find something else to nose at out of our kitchen window. 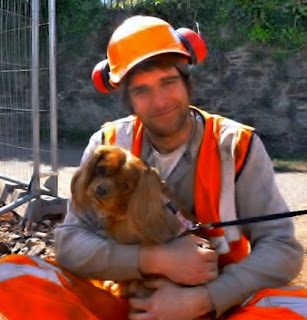 We know someone is really going to miss Josh. 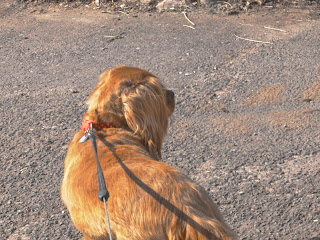 We took Freya out to see them off over our little bridge.  They've gone. 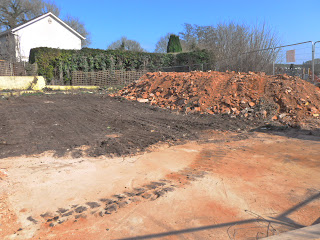 This is the finished result. One two hundred year old cob cottage that was next to Soggibottom has GONE.
The demolition crew have finished, but there is still work to do outside. We now have to wait for a new fence. The rubble of the cottage that's left is going to help build a new water course, hopefully it will also help with our flooding problem. Seems as if the dust hasn't settled yet. More photo's to follow over the next few months. There is so much more to do. It's going to take time. We would like to think we have the same guys to build the water course.


It's not been an easy job to take down the old cottage next door to us because the walls were so very close to Soggibottom. 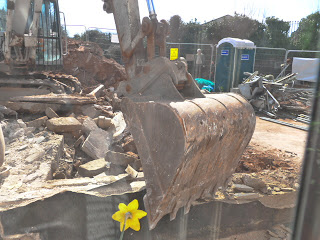 The demolition crew have been very good. There has also been a fair amount of tea and coffee being passed over the wall. They have worked in the snow and cold and deserved every cup of tea and coffee even if they have at times made us hold our breath. They knew what they were doing.


One of the guys even gave us a very bespoke chopping board for our kitchen this morning.


It's Tim's hobby. One that we approve of. Thanks Tim, but no way can we use it. This is for show purposes only, it's too good to use. What a lovely thought. 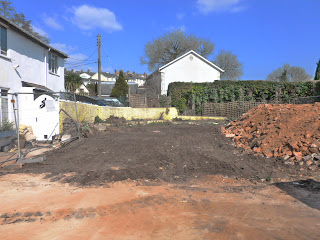 It's definitely a different outlook around here. 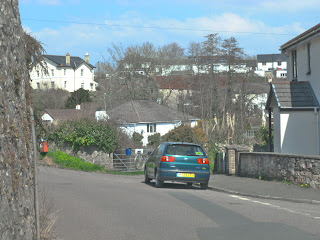 Another view from a different part of the village. We will get used to it. 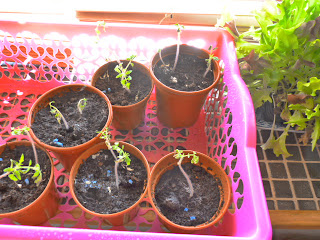 Update on my tomato plants.
They were lacking light over the last few weeks because of dull dark days and the fact that our window's were netted, the scaffolding around the cottage didn't help the light factor. They looked really sick. I moved them into our greenhouse thinking they would pick up. Then I brought them back in the kitchen. They were resting here while I took their photo. I turned my back, Frankie de tabby who was nosing out of the window decided to put his large paws on the tray and up turned them onto the floor. Hum... going to have to sow some new ones.
At least we have more light in the cottage now.


Afternoon tea at Soggibottom.
The postman called with a package this week, it's my belated Mother's Day gift from Karina.
Hannah, Mew and who is the waiter ?


Could it be Frank who in this photo has half of his fish dinner around his face?

Thanks for all your very positive comments over the last months guys.
We only ever have the very best visitors over this side of the bridge.
Freya Rose Blossom can be found as usual over at the Catflap Cavalier.
See you all soon. X X X 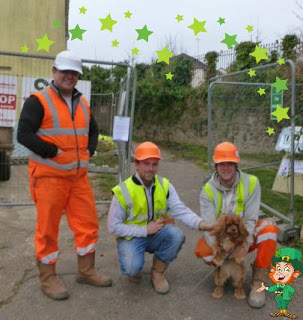 Posted by Soggibottom at Wednesday, April 03, 2013

What a nice gift he made for you, but also very nice that you had warm beverages for them as they worked, not too many people would do that. I love Karina's new piece, very fun.

They are sure keeping your fur babies busy. sandie

We are sure that crew will be begging their bosses to let them go back - you were very kind to them. We hope the work really helps the flooding issue.

Frank, we are happy to see it was you and not Freya Rose who was in the "dog" house this time.

The chopping board is a lovely gift. How nice of him.

It must be nice to have the demolition finished. It was too close for comfort.

Oh what a beautiful chopping block!
I know the workers appeciated all the tea and coffee you gave them.
I can tell they thought a lot of good thoughts about all of you.
Well- plant some new tomatoe planst- they will sprout soon.
love
tweedles

Oh wow - it's all done and dusted!! What a kerfuffle!! But Freya has given these guys her paw of approval so yay all round!!

Oh Frankie!! LOL!! Didn't the seedlings meet with your approval!? Oh dear you are a hard task master!!
:-)

You all deserve cups of tea now! Yay!

What a story, I imagine it must've been quite stressful. I LOVE the hardwood chopping board - what a wonderful and thoughtful gift. My favourite picture is the defiant daffodil standing up against the digger bucket!

The chopping block is just beautiful! That was very sweet of you to keep the men going with hot beverage!

That is a great gift. Glad you got more light. Can we have Spring now please. Have a terrific Thursday.
Best wishes Molly

Peace and quiet...will you get use to that now?:)

You lucky things, seeing the back of the diggers etc. - we have goodness knows how much longer of living in a building site :0(
What a lovely gift too - definitely too good to chop onions on!

Haha Frank, well done mate! He must have got that pack of kitty treats I sent him as payment for a bit of sabotage....
Actually, my tomatoes are looking just as ropey even without a cat upending them. The cold weather and lack of light has really halted any growth. We had blizzards yesterday for crying out loud!

That chopping board is lovely and that was a very kind thought. Hope the watercourse will stop the flooding in your area but you must have watched the old cottage disappear with mixed feelings.