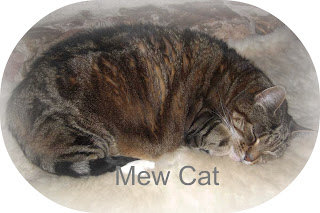 We always wondered how either Mew or Amie would manage when it was time for one of them to part.
They were always inseparable, even sharing visits to the vet.

Mew was about three weeks old when she was found on a very wet June day, on her own in the middle of a sports field. No one will know if Mother cat was moving her kittens or Mew had been put there to fend for herself by some uncaring owner. How ever she managed to be there, lucky for Mew she was found by a dog walker and taken to a cat rescue run by my friend. My friend, knowing that we already had two new kittens, asked if we would hand feed her until she could find a new home when Mew was old enough. We didn't only have two new kittens, Frank and Hannah, we had a new pup at the time, Amie Soto Blossom.

Amie and Mew spent their puppy and kitten hood playing together, chasing each other up and down stairs or around the garden and house. Where ever Mew was, you could always find Amie.

Mew and Amie were always a very big part of Soggibottom Cottage..There will always be a certain spot in front of the fire Mew used to warm her paws that will always be hers.  Mew was a gentle, loving and beautiful friend who now lies beside Amie again beneath our apple tree. 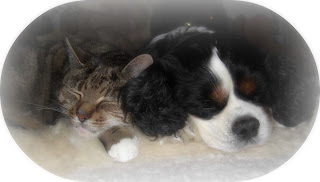 Oh No! Poor Mew, at least they are together again. Freya is gonna have to fill a very wide gap in your little family now. Our thoughts are with you.
Love to all Judith and Ian and Lucky x

Mew and Ami are running and playing together again.
I am so sorry you had to lose them both so close together.

I'm so sorry. What a beautiful story of how she and Amie grew up together. Such loving creatures.

I'm sooo sorry. It's so hard to lose our babies. I lost my last puppie this year. My Sammie.

I love your little Freya and am glad you have her.

Poor Mew...she missed her friend. That's what happened with one of our cats. He missed his sister and his best friend so much that a few weeks after she died, he just didn't wake up one day.

Aw, I'm so sad for you. To have lost two special friends in such a short time. They will always be together now. Give Frank and Freya a hug from me.

Oh my goodness, I'm so sorry to hear this. You did say she had gone into a bit of a decline with Amie gone - you have had a bad time this year with your pets. I do hope Freya can keep Frank busy so he doesn't get despondent too.
Hugs, C.x

Sleep well Mew. We're glad that you and your best friend Amie are together again.

I lost two dogs a couple years ago and it's so hard to say goodbye while still grieving for another. I know that with so many close in age, I'll probably face it again in the future, but they make my life better, so I wouldn't change a thing.
Love, Sue

Such a beautifully written post, and such lovely photos, I'm so sorry for your loss, together forever playing in the heavens! Sending lots of love and hugs your way xxxxxx

Oh how sad! I am so sorry that you had to lose Mew, too...They are probably having a great time together...So glad you have the new one and I hope Frank de Tabby becomes close with her. Great story about Amie and Mew, too.

Oh Midge, I'm so sorry about Mew. And so soon after Amie's passing.
I hope the two of them are having the time of their life being reunited. God has a special place in heaven for our furry babies.

Oh dear, we are so sorry to hear this news. But you put such a happy spin on the sadness. We bet that Mew and Amie are happy to be together again. Hugs to you from all of us.

we're so very sorry to hear about Mew :( I saw on facebook and had to check. we are sending our love and warm thoughts. and as others have said, at least Mew and Amie have each other now!
much love xxxxx
and warm thoughts
xxxxx
Ayla & David

Midge, I am soo so sorry...This has been some year for you...Mew...Your story of her was wonderfully put. I'm sure she and Amie have picked up where their bodies on Earth couldn't anymore. Up and down the Celestial Stairway, as spry as kitten and pup. Bless them both.

I love the story of Mew and Amie. How fitting that they are together again. Hugs to you all. Thank goodness for Freya to bring you smiles, if not Frank.

Midge
The tribute story that you did about Mew was so beautiful.
It was as though you were painting a story.
We are so sorry to hear this news.
Sometimes a friend cannot live without the friend they grew up with. Sometimes they long for each other so much,,,,
They are together now,,, forever...
together forever.
You gave Mew the best home ever.
love
tweedles

It is much too soon for you to loose another loved pet. Rest in peace Mew and snuggle Ami close

Oh my gosh Midge I'm in shock, tears are flowing - sweet Mew - oh my dear this has been a very hard summer for you. I am so sorry!

Hugs Midge. I think Amie and Mew will be chasing and playing together at Rainbow Bridge now they are no longer hampered by their older bodies. Give Freya a snuggle.

I heard a few hours ago- my new niece is going to be called Freja. Shame she is only a human and not a canine. LOL I immediately pictured her as a ruby cavvie. I know keep taking the tablets. :-)

I love to think that Amie was there at the Bridge waiting for Mew.