We have two Cavaliers at the cottage, I know everyone knows this one !
Where does Napoleon Bonaparte come in ?


After spending so much time inside this Winter what better way to pass a sunny morning than a walk along the beach. Amie and I often stroll up and down this one.


We pass this building which until a few months ago was a restaurant and pub. Now it has refurbishment big time and is being turned into a hotel.


During the Napoleonic Wars it used to be a hospital for French prisoners.


After Napoleons defeat at Waterloo he was exiled to St Helena.
Everyone knows that. He did however land in England once.
The only place he ever put foot on British Soil was here.
He was aboard the ship H.M.S. Bellerophon and allowed to visit the French prisoners at the hospital. 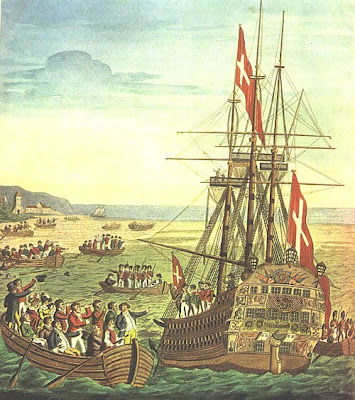 You can walk along history's path every day and never know it.


This is the other Cavalier, I promised ages ago I would show one of the better second hand old bears to look out for.


ONE THAT HAS A GOOD COVERING OF MOHAIR


This little guy has been in the family for about 30 years.
Only his paw pads have been recovered. Not by me I add.
Although I did make his Cavalier suit about ten years ago.
When you have a lovely old ted PROTECT HIM if you can by clothing and a hat to keep him dust free.

Labels: A good ted is always worth looking out for.

I love Bruce in his outfit.
Very gallant. Does he speak French?

I like Bruce,
He looks like one of my friends. Maybe they are brothers. I like your sandy beaches. I wish you could tell me a story. Maybe if I sit long enough you will. I just know you can.
love
tweedles

I like Bruce it fits! Always love a peek at the puppies!!
Hugs, Lisa

Fun history and lesson about bears.

Amie stuck out her tongue at me!!! *giggle* I'm jealous of your sunny beach. I would love to come stay in the new hotel and get some history! Bruce is delightful and his outfit is super, Midge! You're a woman of many talents.

I'm so glad you stopped by to see us! Maddie is always so happy to meet other Cavaliers. Really Maddie's the only dog I have that isn't a rescue. I couldn't help myself...

Hello Soggibottom, Thank you for visiting my blog. I like yours, too. Especially Bruce!

Love Bruce- I've a brother in law called Bruce, wonder whether he's any relation???
Love the photos and the history- as you've probably figured that sort of mixed up past and present fascinates me. I wonder why NB was allowed to visit these people in particular, or if it was chance. I've heard another story of HMS Bellerphon, but just now I can't remember it...if it comes back to me I'll say!
Also, I thought I'd made me a follower of you ages ago and somehow you disappeared- did you feel disappeared? Anyhow I'me clicked again so hopefully you'll not wander away again!