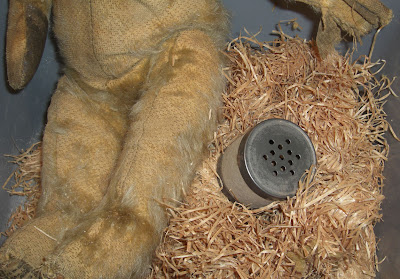 I have been asked by various emails this week...
What is a growler?
Here is ted's growler/ his voice box.. The cardboard and metal round thing set among teds wood wool....in this case it was teds tum....
Tip me up and I talk box. Except bears mostly GROWL........


I take it for granted that because I know what I am talking about (well sometimes, not always) I expect everyone else to understand......
To remind you how Teddy looked the day he arrived at the cottage the photo is above.
He is very well, and still enjoying his stay at the cottage...
Still climbing on the furniture and having lots of Devon cream teas while he watches Television.
I have had to limit the T.V. time thankfully he has borrowed a Rupert Bear Book from the Soggibottom Bear which seems to keep him happy enough.

I'm still working on him and finishing off.
His owner has to see him first looking beary smart, then I will show you again.
I have to be careful, as I am getting rather attached to him....... AH !
Teddy is nearly ready to go home. HE IS EATING ME OUT OF DEVON CREAM TEA'S ...
I think he is going home fatter than he arrived.
Posted by Soggibottom at Thursday, February 11, 2010

I can't wait to see him all fnished, his owners are going to be thrilled.

My gosh can you do that on humans? I think I need some Soggibottom maintenance work! Amazing job Midge, what a handsome fella he looks now. Thanks for explaining the growler!

He is looooking wonderful. The cream teas have done the trick as well as all your hard work

Midge you sure have brought him back to life! I am sure the ne wowner will be more than pleased, even if he is a little podgy from all the cream teas...lol

That bear is super cute! I am sure that they will be thrilled to have him.
Micki

You know my mom and I were looking at a site of a bear artist and she had a basket of "nose floss" The more I looked at the caption I had to laugh, If you didn't know about making bears it would sound really gross! I thought "Why don't you know what a growler is?" I guess I forget not everyone is in the bear world! It was nice of you to share!
Hugs, Lisa