What is cob, how to demolish a cob cottage and dyeing mohair with red onions. 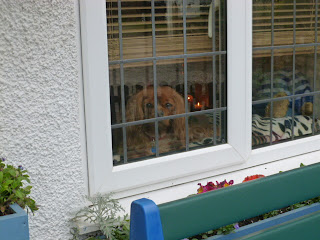 There's so much going on down here this week.
If Freya's nose grew every time she looked out of the window to see what's going on, she would be an extremely long nosed dog. 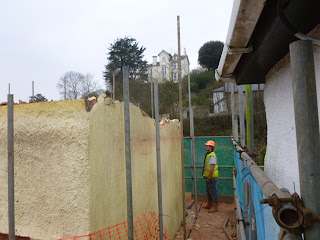 It's now day two of week number five since the demolition of the cob cottage next door started. 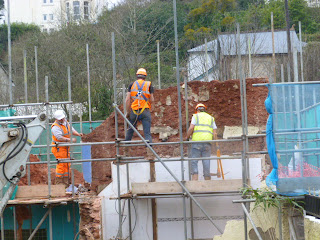 Beyond the point of no return.. This once beautiful old cottage is disappearing before our eyes. 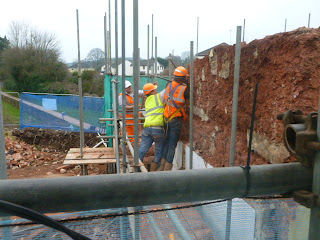 It used to be beautiful before it was left for over eight years waiting to be knocked down.
Like the cottage next door Soggibottom cottage is made of cob and local stone. 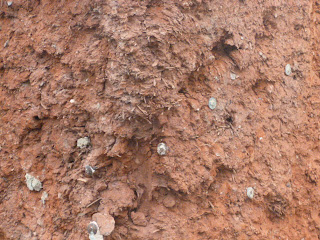 Cob is a word that comes from old English meaning lump or rounded mound. It's sand, straw and water. We live in a mud house. A red mud house at that.
By this photo of the wall next door, you can still see the straw in the mud.
At times we have had to take away parts of the interior walls of Soggibottom. Especially when we first arrived and took the old worn out kitchen units (I should have said tired kitchen units).  We had to go right back to the cob wall, the straw was as golden as the day it was put there over three hundred years ago. 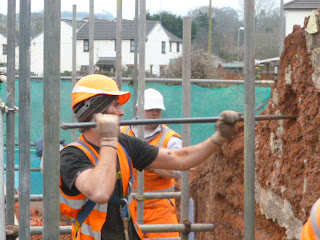 At least cob is supposed to be non toxic and completely recyclable. Did I forget to mention the resistance to weather.  In warmer weather the walls tend to contract and in wet weather they expand. But no so much that you ever notice it. It's warm in the Winter and cool in the Summer. 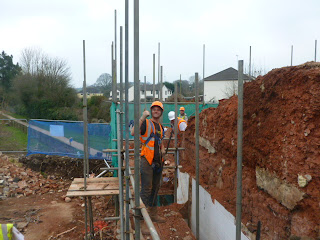 The guys have been extra careful taking the cottage down. It's been done mostly by hand. It was snowing when they were all trying hard to make sure that the walls fell to the interior of the old building and not fall outwards towards us this afternoon. It was cold, a big fat zero degree's.
This is Freya's new best friend by the way. 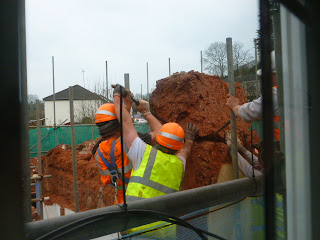 Now you see it. 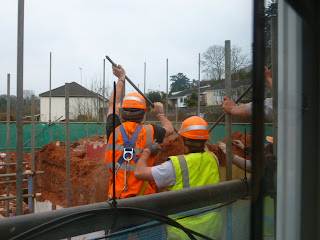 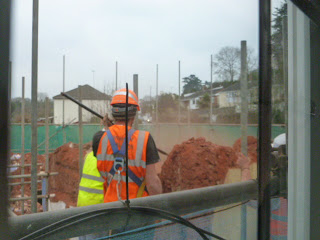 We have a completely different view from one of our windows. There are houses there.
Also a view of the original road through the village. The main road used to go over our little bridge at one time called Monks way. It went.past Soggibottom Cottage and curved around the corner. Until the railway decided to put a rail line across it splitting the village in two. Nothing much changes, except instead of a railway line there is going to be another new road. 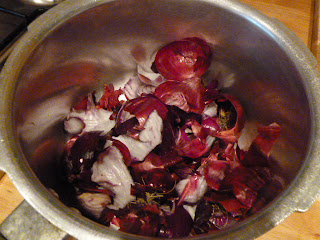 I've been trying to create this afternoon. A pan of red onion skins. 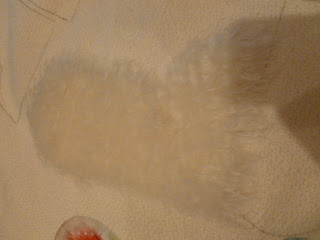 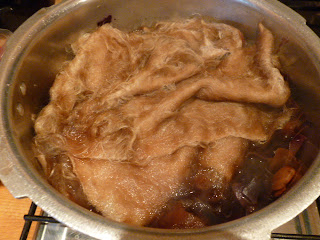 I normally wet the mohair and then dump place the mohair carefully in with the onion skins. Then put it on a low heat for half an hour or so. Wash out the mohair with warm water when you think you have the depth of colour you want. 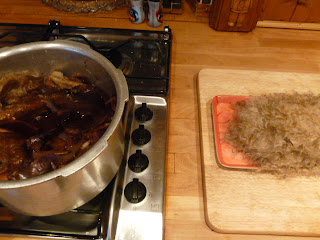 I promise the mohair does not smell of onions. 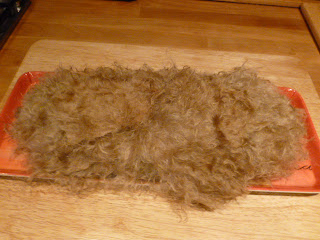 I'm happy enough with this colour, it will be slightly lighter when it dries. 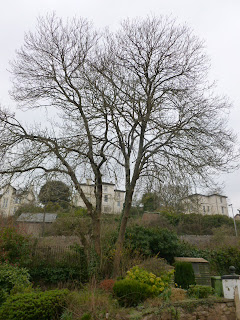 The tree outside of Soggibottom cottage. I thought I would add it, just in case it isn't there this time  tomorrow. 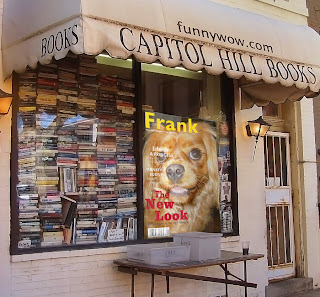 Freya and her nose are, as usual over at catflap cavalier.
See you all with another update soon. X X X

must bereally strange without the house next door. The mohair looks a lovely colour

I would say that there is not enough room for a highway! Holy cow, is it going to be right next to your garage?
It will be very noisy at the cottage! Thanks for posting about the walls of the cottages, it's very interesting and I know that Freya & Frank sure aren't bored, these days! Hope you are doing well. :)

Years ago and I do mean years ago - I did a science project dying clothes with food - I know it works.

It must be a lot brighter inside your house with the cottage disappearing.
Will the mohair be a teddy one day?

Love ya lots,
Mitch and Molly

I sure have been enjoying your demolition info and photos.

BTW - is it far for you to go for groceries and crafty "things"?

Wow, you have a brand new view. Does it make your little cottage lighter? I should think without that place next door the sunshine would come pouring in.

Love to see the dyed mohair. I did tea dye a piece of fabric once to stitch on, but I'd like to try some colors some day.

Freya is such a good girl. My pack would be standing there at the window barking instructions to the workers. They're a bunch of busy bodies.
Sue

I hope that tree is still there tomorrow; it's beautiful. What a shame that old cottage is being taken down. I bet those contractors love seeing Freya in the window; she's such a cutie.

Hi guys and thank you for all your comments.. the days are starting to blur through lack of sleep.
They seem to start work earlier every morning.
Forgive Soggibottom for not blog visiting.

The cottage isn't lighter yet, we still have scaffolding around protecting us, but I'm sure it will be better. Wow, a whole new look out of one of our window's. A view that would have been so different 200 years ago. It seems strange to us to see a different view. I'm sure it will all be fine in the end :-) Thank you again for all your kind comments and questions :-) :-) Which we will try to answer :-) lots of love x x x

Freya has her own live movie to watch, lol. Moki is like that, always looking out the windows to see what is going on.

Wow, they are finally moving at speed! Must be so weird - but there is definitely light at the end of the tunnel (literally!)I hope you get a break over Easter in which to catch up on some sleep!

That is going to be strange not seeing the cottage next door but we bet it is much lighter. Onion skins are also brilliant for decorating Easter eggs too. Have a wonderful Wednesday.
Best wishes Molly

Oh wow!! The cottage is so gone! Oh dear! It's quite sad really! I only know cob as bread and corn! LOL!! Ok - I never knew about onions and mohair! How fab!!

Maybe they will get moving and have it done by Easter. Although I really hated to see it go. Are you having a look-see through the dirts for any interesting things of old?

We think of you every day- and all the changes happening at Soggibottom.
We say farewell to the tree and thank her for the many years she provided a place for birdies to sit on the branches, and build nests.
The sun will shine on you soon.
The onions skins!!!! how cool is that?
We send love!
xoxo
tweedles

What an interesting process! I think the cob is a great idea - look how long it has survived!! I didn't realize how close the yellow cottage was to you and look at that new view- WOW!