Samhain and the Salem Trials.


Samhain is the Celtic feast of the dead.

There are so many customs, instead of boring you silly here are just a few things from Celtic tradition.

Soul cakes for deceased ancestors, a custom that has been transformed into giving treats to travellers who wander about on this night.

Samhain marks the beginning of the season of death which is Winter.
Fertile fields of Summer give way to the bare forests.

To celebrate this magical eve fires were lit on the sidh, or fairy mounds, in which the spirits lived.

A night of death and rebirth. Celtic tradition says that all those who die each year must wait till Samhain before crossing into the spirit world where their new lives begin.

I probably know more about the Salem Trials in America.

It all started in the Reverend Paris's kitchen, where Tituba a slave woman from Barbados, entertained the Reverend's daughter and her girlfriends during the cold winter months of 1691.( Soggibottom cottage was thirty years old. Spring Chicken of a cottage). 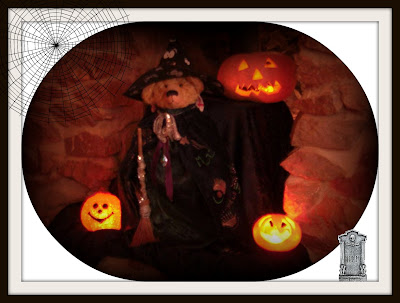 Are you sitting safely ?
Don't forget to be warm and cosy by the fire......

The girls asked Tituba, who knew methods of divination about their future husbands, a normal concern of most young girls.
In time the girls began to have fits, showed extreme moodiness, adopted odd postures and gestures and had visions. In Salem village this behaviour was interpreted by church leaders as the work of the devil.

Hearings were held over the next few months at which the girls and others who became afflicted with the same behaviour accused adult members in the community of tormenting them. (Teenage fad?)

As the winter turned into spring, natural misfortunes were blamed on the devil working through certain members of the village.
The theories of the day, the devil could work only through someone with that person's cooperation, someone who had made a pact with the devil. Someone who was a WITCH.

Accusations were made, people arrested, hearings were held. By Spring the jails were overflowing.

When the first real trials began Bridget Bishop was hanged after having been in jail since April.

August trials found John Willard, John and Elizabeth Proctor, George Jacobs, Martha Carrier and the Reverend George Burroughs guilty. All were executed, except Elizabeth Proctor, who was pregnant and given a stay of execution until her baby was born. (Good of them).

Matha Cory's husband, Giles was pressed to death beneath the weight of stones. At the end of the gruesome summer over a hundred people were still awaiting trial and several hundred others had been accused.

The question is, were the twenty people executed and the hundred accused really Witches ?

Or did they just hold on to their Celtic roots......

British Winter time begins tonight.... so you have to put your clocks back.

If you don't know what Divination is, reading Harry Potter will enlighten you.
Posted by Soggibottom at Saturday, October 30, 2010

Brrrr, that was spoooooky!!! Hard to believe they really believed in witches back then! Have a scary Halloween:)

I remember watching a documentary about this one time - archaeologists attributed the odd behavior to some kind of problem with the food supply, causing people to have weird ailments which were blamed on witchcraft. I guess we'll never know for sure!

Well done on your history! We were in Salem this time last year and saw a brilliantly creepy diorama show of the story and then went and saw the cemetary with all the graves of the 'witches' - absolutely fascinating place, we'd love to go back. No better place in the world to spend Halloween! (Stacie is wearing her Salem t-shirt in tribute today!)

booooooooo to you
am i scaring you?
That was a very scary story!
thank you for the reminder to change the clock.... we do it too.
i think
love
tweedles

I would say, young girls with too much imagination and ignorant adults who believed them;)

At least I got my black cat in time for the festivities, lol.

Debbie... my saviour.. We normally always have had black cats. :-)
No one mention my broom please :-)xxxx

Why would you know such things? Something spooky there I thinks. Will a blackish dog surfice for a black cat? What you think?
I will look out for the Cretan witches tonight.

Horrible story isn't it? I wonder what really caused it all?

I have a hagstone (found on a Northumbrian beach) - I have threaded a twist of silver through the hole which apparently will protect me from witches ... so I ought to be safe!

You tell the history very well. We visited the Salem Witch Museum many years ago, and I was shocked at the cruelty of the method of punishment, which eventually killed the person. But Hawthorne's house is right near it and that was great to see. Thankfully, we live in a more reasonable time.

I just loved this post! So very interesting and C H I L L I N G....
BOO! Right back at ya! Happy Halloween!

I love learning new stuff. Thank you for this - you have enlightened me.

A couple years ago I decided to research my family tree. I am related to Rebecca Nurse. I am also related to one of the judges who sentenced her.