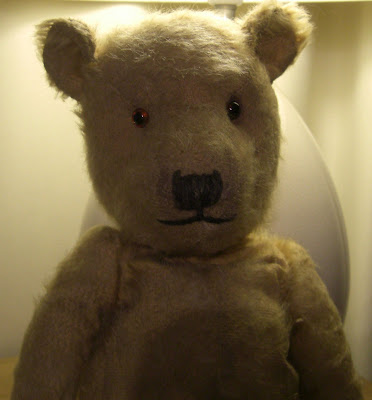 Meet Mr Perkins............... looking slightly different from the day he came home from an antique shop in Plymouth. 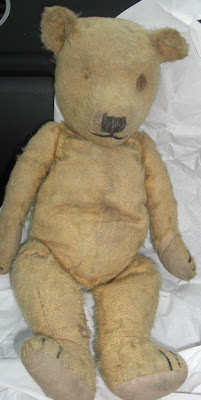 No eyes, dirty, a hole in his leg and very patchy sparse mohair. WHAT MOHAIR?
A typical well love and played with old teddy.
I never pretend to be an antique bear expert, so forgive the pun and bear with me over the next few photo's. This is the bear I chose from the three you saw in the display cabinet a post or so ago. He sat in the middle of a very sad looking Merrythought and another patchy old looking bear. The Merrythought had an arm missing, not impossible to give him a new arm and he had the right label and button. But I chose Perkins instead. No labels, no buttons in his ear (or evidence that there ever has been). Haven't a clue who made him. 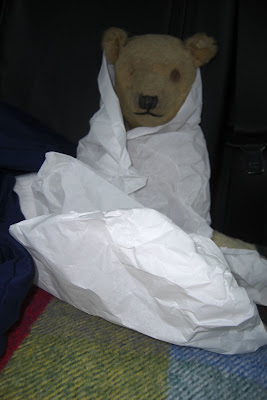 The guy in the shop might have noticed me hovering around by the display cabinet for ages. Hovering wasn't the word, I just kept ending back at that particular display.

The Bear's pattern reminds me of a 1930's bears pattern. Maybe Perkins might be earlier. You will see why I think he might be as you scroll down.
The guy in the shop wrapped him so carefully in tissue paper and put him in a plastic bag (PLASTIC)..... When we got back to the car Perkins came out from the bag. Sat in Amie's place in the middle of the back seat, I left him wrapped in his paper as he looked fragile to take out completely. 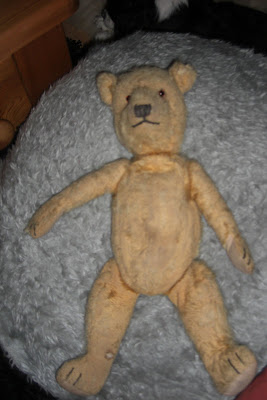 This is the first night at Soggibottom.

I took a while to really look at him to decide what to do without ruining his old bear looks. First thing he had was a pair of eye's. Eventually he will have a slightly larger pair. The only pair of the right size glass eye's I have in my bear eye box are green. He doesn't look like he suits green eye's.

Hole in his leg, and worn around his joints where the stuffing had compressed and fallen over the years. Paw pads weren't too bad, worn and slight nicks. Repairable with thought. 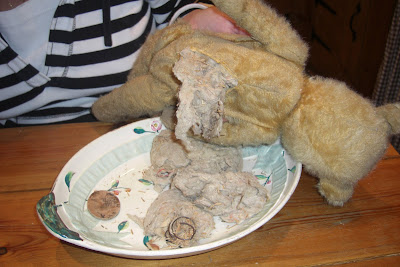 This is the nasty stuff, if you look away Perkins and I will understand!

Kapok and wood wool stuffing, also a very, very old growler that looks like it had been made from leather and material. This is the reason why I think he is a twenties bear....but if you know different, don't hold back, let me know. 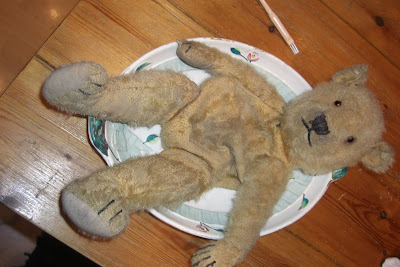 Not the most dignified pose, stuck on a plate on the kitchen table.

I re stuffed his body, you'll be pleased to hear. Stuffed around his head and the rest of his joints really softly and although I have wood wool I felt that to have put it in might just finish off the remaining mohair causing more holes over a period of time. He has a new growler, eye's and a new voice. 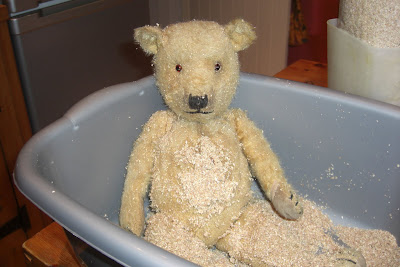 I used Bran and a warm water spray. The micro fibre cloth I used had to go into the bin when I had finished. You could say a bath was overdue.
Working the bran gently into the bear and using stroking not hard rubbing stokes brought off most of the dirt. Then left to dry and gently brushed with a soft brush. Very softly, softly stuff really....Holes fixed, I'm glossing over this bit because although I have made sure they won't fray anymore the decision is to sew, patch or stick.
The hole in his leg was different. I could have sewn it but instead, rummaged into my stash of mohair and found a backing that matched his as near as possible. I distressed the new mohair before using it for a patch. I had a fleeting thought about rubbing it in the garden or the stream...dismissed the idea. Instead I used an ordinary pencil. I think the patch works rather than anything else I could have done. Again any comments always welcome. 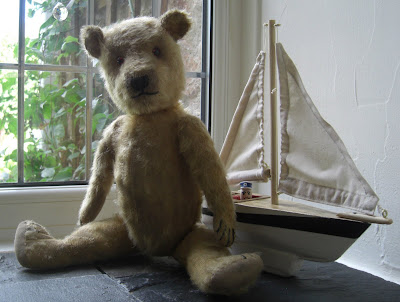 Here he is, in the cottage window.
Sitting up on his own without leaning on anything.
Watching the world go by and he can growl when he needs to.
Waiting for some clothes. They will help to protect him for a few more years.
If you have an old bear, protect him/her. It doesn't mean you have to keep them locked away in a dust free cabinet or in a box.......Keeping sunlight away helps, dressing your bear helps too.

Put them in your window, let them see who comes and goes. Let other people enjoy them. 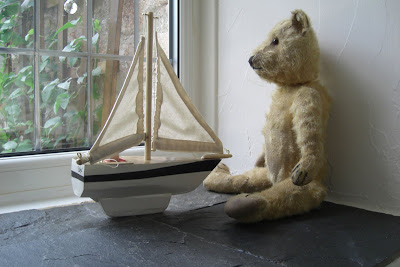 If you have any idea's on a dress theme, feel free to suggest something.

Different bear from the one that we saw in the antique cabinet, different in as much as I hope he will last longer. Longer than rotting away in an antique shop display cabinet. As for the other two......ha ......well.................I have plans.

I'll warn you again, about spending money on an antique bear you fall in love with but might fall to bits as you get it home............

Restoration is not as easy as it might seem. Bran baths do wonders.................
One more thing I feel I should add, it's not polite to be touchy feely with old bears, or artist bears, always ask first!

If you ever need help with your bear/bears I'm always pleased to help.

I might be a gardener, a felter, knitter, quilter, doll maker, avid book reader, music lover, animal and bird lover, chaser of turtles and sharks on reefs, history lover, Amie Soto Blossom BOSS, the number one of all people at putting their one good foot in it and upsetting people, BUT most of all my passion apart from my family and friends.................BEARS...........especially old ones.

Is he smiling, or is it just my imagination?

What do you think?

Soggibottom has again been awarded an award...thank you.....I will post it, as always in my own good time x x x
Posted by Soggibottom at Saturday, October 10, 2009

Labels: For the love of Perkins

Oh my, oh my, Mr. Perkins is a dear. You did him wonders and breathed new life into him. My suggestion on clothing is a white shirt with a full suit (herringbone or houndstooth) and perhaps a jaunty hat. Maybe a cane or an umbrella - gosh, I could go on....

Thank you Dolores.
Herringbone and houndstooth has been mentioned because of his era. Go on give me all your idea's. I might even make him a small quilt. I love the idea of a lone star x x x

wow you really have breathed life into the old fellow...you are very clever and obviously have a huge love for bears.
xxrosey

You are quite the teddy bear doctor, Midge! I think I am in love. (with the bear, silly! :P)

He has a lovely colour, it must have been gorgeous when he was new. He looks like such a sweet, kind bear. Looks like he was greatly loved, luckily you saved him from that lonely shop!

He needs a vest, definitely.
(*cough*NFLDtartan*cough*)

You have done an amazing job with Mr Perkins. What a difference the bran bath has made to make him cleaner. He reminds me of a bear I had as a child and of which is hanging around here. Years ago I dressed in in a Sailor's outfit, which would also be fitting for Mr Perkins alongside the boat. Just love teddies.

I thought a sailor suit too a she is sitting next to a boat.

he is lookin gso much better. Lots of my bears are wearing jumpers. Though they are mainly the synthetic fabric ones.
Most of my mohair ones I bought at bear fairs but I think its time that I kitted a few of them out in clothes.

Biddle gets a new outside everynow and again but he now has a range of jumpers to protect him. The last "new coat" was very traumatic as his original inside was disintegrating. But he is 44 now and goes on so many adventures. he and the rest of the hug send best wishes to Perkins.
You can see his story here:
http://www.biddlebear.pwp.blueyonder.co.uk/

oh he is definitely smiling :0
You worked your magic on him- well done.

Because you said from the 20's, in relation to Mr. Perkins' age, I thought of a straw hat for his head, and worked down from there! A suit, but a summer suit like the college 'men' of the time wore. And he looks so soft and huggable now, Midge, you are the magician with bears. Great job, well done, as you Brits say!

Aren't you all lovely. ah thanks guys for all your comments. Most of all you all have some great idea's for "young" Perkins. Thank you x x x

I arrived here from Dolores' blog and was thrilled to read about your brave rescue of Perkins. Thank you for showing us, step by step how you revived him. He looks a very relieved and happy bear now. I especially like the picture of him gazing out of the window.

Good news!!!! You have won my blog giveaway!!!
Could you e-mail me your adress so I can get the bag off to you
karenjtomlinson(at)hotmail(dot)co(dot)uk

thanks for entering and congrats,
Hugs Karen x

I'm on a mission to repair Soggibottoms computer this weekend and so posts should return to normal soon! - Sparkybrand

Wow you did an AMAZING job, my mother in law lives in Plymouth, and we are back and fore to Devon and Cornwall all the time :-)
I repair, make and collect teddy bears, also rag dolls.
Check out out my website and Blog www.rag-dollhospital.com i'm so pleased i found someone here in the UK, that i can chat to about this stuff yay!
RSx