We think we have troubles with all that is going on around our cottage at the moment, but just a short drive away there is a house, it really is right on the beach. At least half of it is ! 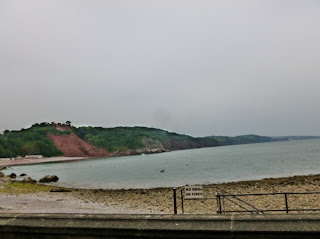 This little bay is a place to find sea horses believe it or not. If it had been a few years ago, I would have had my snorkel and flippers on and been swimming away in an under sea world.

This is the bay at low tide.
We often go there on Summer evenings, not to admire the beach but to look at the beautiful stretch of scenery.


The woman who brought this house a while ago when it was auctioned had never seen this house or where it was. I'm sure she thought at the time she had brought a bargain..
The last time we were here the cliff had started to collapse.

We were a bit shocked to see exactly how much more it has come down taking the house with it. Two other houses are too close for comfort. The result of our wet weather last year. 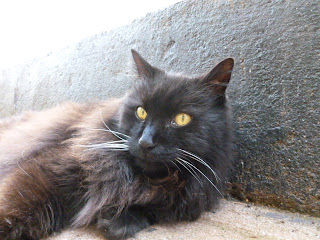 Makes me wonder if the two houses that are now on cliffs edge have a cat.


Years go by, we often lose count of how old our pets are.


Frankie de tabby is 16 and a half. I am so thankful I was into cross stitch all those years ago.


Take one Frankie de tabby, one vet visit, one very hot day and one cat box. One ever so nice Mr Vet and a couple of jabs and cleaning a cat bite abscess.

The vet was stressed.
We could tell.
Frankie de tabby was so stressed that he panted and lay on his back with his legs in the air and his eye's started to roll.  As I said, one very stressed vet.


One of us got Frank back into his carrying box, and out to the car with all the windows down.
The vet and I had a discussion about Metacam. If given over a long period of time it won't be helpful to Frankie de tabby. We have such a good vet that he left that choice to us. We have an open prescription for Metacam if  Frank needs it. A good guy our vet.
Frank at the moment is okay, he is taking his pills in cheese. When the vet asked me if there would be a problem with taking pills. Nope, no problem...  two words came to mind. Greedy guts.
Frank also has a slight eye problem well that was to be expected after defending his territory for so many years.  We won't move the furniture.
Home along the back road, we got home quicker. Frank was out of his carry case and straight into eating.. Frank was stressed.. yeah right.
The vet told us not to bring him back for a check up unless we thought he needed it.  ah, Frankie de tabby you kidder.


Frank did lie outside in the shade for a while after all the excitement and calmed down, he lay on the other side of the LOCKED cat flap where he could hear the birds cheeping and feeding. IT BROUGHT HIM ROUND TO FIGHT ANOTHER DAY..


Mr Fox is around and Mr Fox has never got the better of Frankie de tabby yet ! 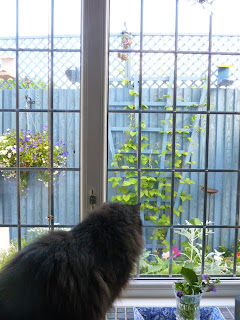 You live near that house!?!? I saw this on the news - the house next door is for sale but you can't move in it because of what happened to next door! Oh my stars!!

Awwww Frankie de Tabby! You beauty! 16 and a half and looking ever so sprightly and wonderful! I'm so glad you have a nice and understanding vet! We hope you don't ever have to see the vet any time soon no matter how nice he is cos it sounds like you really get stressed. One of my angel kitties used to get stressed like this - he'd hyperventilate so much his sweat would wet his bedding - it was very very stressful!

Gak! How terrible for the lady with the falling down house! Talk about a bad bargain!

Hooray for Frankie de Tabby. Willa Mary speaks very highly of Frankie. She says he was a good friend to her while she lived at Soggibottom.

Jo and the gang

That is scary, I am sure it was safe at one time but with cliffs, it just takes one fault line or a lot of rain and it is gone. That is cool, would love to see a real sea horse.

Here are some get well wishes for Frankie de Tabby! What a brave 16 year old to go to the vet!
Oh we feel sorry for that house and the poor woman who bought it!
How awful
love
tweedles

Poor Frank I hope he got lots of treats after his stress.
Tia sends purrs and kitty hugs.

Is that a Jo Verso cross stitch pattern?

Frankie is living to a nice old age. You treat him so well he figures he'll stick around. Now that house; boy. I hope her property taxes get adjusted each time the cliff crumbles a bit more.

Glad to hear that the vet visit is over and Frankie can get back to his normal routine. Morgan takes Metacam for her arthritis and it seems to help. She likes taking it each morning.

Oh my goodness! How tragic for this poor lady to lose her house this way!

Love ya lots♥
Mitch and Molly

Stopping by to thank you for your kindness and friendship. It means a lot to us, especially at this time.

We want to thank you so very much for your kind words of comfort and friendship after our very sudden loss of Thunder. We are all still very sad, but the support and love from all of our friends from all over the world is helping to heal our broken hearts. We are sure that Thunder Dunder is now in a very happy place and also very thankful to have so many wonderful friends.

Yikes! That house is pretty scary - the poor woman who bought it.

We are glad to hear Frankie is on the mend.

Don't know if this will come up under Mom or not...
But thought I'd say hi since i'm on her laptop! crazy house falling down, poor sods!

miss you all so very much!! fancy a visit to Canada???
I promise you won't have to do dishes!!!
xxxxxxx

Ayla, only you could say poor sod on my blog :-) and we laugh together.. hey this time we will have to bring the champagne... not wash up ?

Ah, David looks like you have the washing up gloves again. ;-)
Ayla. thank you. One of us could and one of us couldn't go, we always do things together.
Frankie de tabby also insists that he comes too and he never goes anywhere without sitting in the front seat so he can see where he is going. :-) X X X
But if it is a wedding :-) ???? xxxxxx your gonna so hate me :-) :-) xxxxxxxx