How to file your best friends nails sneakily 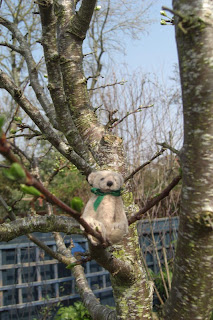 It's so good to be able to show you a bear again.

The size of a bear in a photograph can be deceiving. 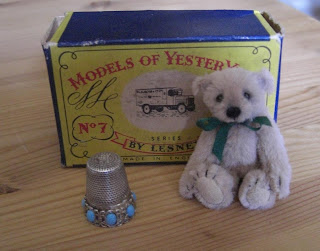 See what I mean. I didn't make this little guy, I won him in a Benson Bears giveaway a few weeks ago. 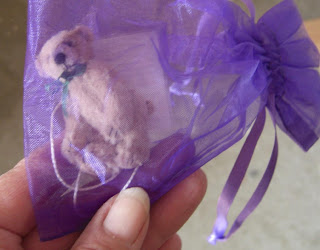 How I could be so lucky. I gushed when I won him, but just like to gush again and say thank you to Linda from Benson Bears. Linda has more bears you can gush over at Bears in the Bush.  He travelled from Tasmania to Soggibottom  and arrived a few minutes before we took a large step to normality in the cottage from our burst under ground water pipe back in February. 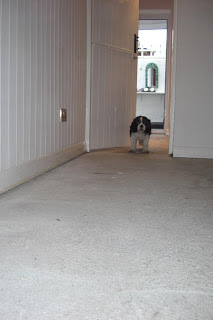 We can't say we are sorry to see the back of grey concrete. Amie wasn't very impressed with it either, but it was a good way to file her claws. About the only positive thing that that a concrete floor has in it's favor. 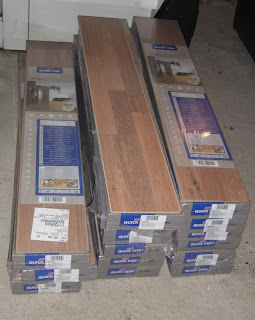 Even my tardis cupboard under the stairs had to be removed. Everything that could be moved went to higher ground ready for our new floor. 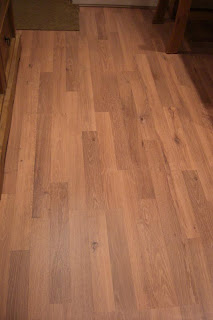 Was it worth waiting for ?
Not sure if we really needed a leaky water pipe to start with or all the hassle that went with it.
Beautiful floor though. 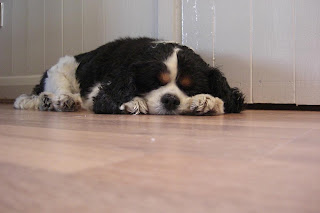 We're slowly getting back to normal, things are returning to where they should be.
Isn't that right Mew ?
Posted by Soggibottom at Saturday, April 02, 2011

It's good to have you back and I'll bet you're enjoying that beautiful new floor.

I posted a picture of the sweater on my blog. It was so much fun to make that I've already started another.
Sue

Glad to see you posting again and your floors all done, so you can enjoy your home again. Love that little bear, so cute.

Long time, no see!!! I love that tiny bear, I adore tiny things:) I have a miniature Winnie the Pooh bear, he's so cute:)

I hope all's going well and I'm sure you're glad to be getting new flooring! Nice to have you back my friend:)

Oh Mr Bear's sizes are messing with my head! LOL!!!

Awww your flooring is looking amazing! Hello Amie and Mew!!

Everyone looks played out... How about you, dear?
The floor looks worth waiting for to me...
The bears are precious...
God bless..

Oh, that little bear is too cute. You had me fooled. I doubt if anything fazes Mew.

That was a lot of hard work and inconvenience, but your new floor is beautiful.

And that little bear, so tiny and yet so perfect.

We bet you are all glad to have things getting back to normal.

What a sweet little miniature bear. I love the way you photographed it to throw us off the track!
Glad your repairs are nearing the finish point!

Midge your new floor is quite lovely. I'm glad things are getting back to normal for you. Hugs to Amie and Mew!

Oooh, there for a moment I thought it was a koala in the tree - how cute!
Hugs - Lurline♥

What a CUTE little bear and how appropriate that you won it! Your new floor looks wonderful, I bet you're so happy!

Your floors are so beautiful Midge!
What a long process for all of you,, but now that part is over.
I see a bear in your tree.. do you have any monkeys?
love
tweedles

Love the teeny-tiny bear - admire the workmanship too!
Well, that was a bit of an expensive way to file Amie's nails wasn't it? A trip to the vet's might have been cheaper ;0)
So glad the floor is down and you can get back to normal - I can only imagine how much of a pain the last few weeks have been.

So glad to hear that you have the flooring done.
We had to replace our bathroom flooring as a water pipe had broken.
Congratulations on winning one of Linda's sweet little bears , he is so cute.

Golly, that bear really is tiny! Tiny things can be so cute.
I especially like the photo of Amie testing the new floor!!
Glad its done, floors can be a ##### nuisance. The Hub wants to re-sand our kitchen/hall/passage floor and I've been distracting him from it for over a year as the thought of all the upheaval makes me feel ill.
Still, yours sure looks good!

Congratulations on your new floor it looks beautiful. What a tiny and cute bear!

Sorry you had to get your floors done - but HEY they are pretty nice! I would just love hardwood floors here. Ames you need to do a lot of running on that concrete to file your nails! I think lounging on a grooming table being fed treats like a Greek Goddess is more becoming for you!