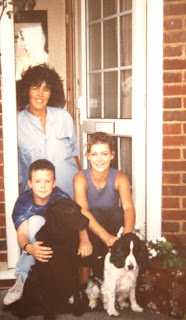 We needed some time off, that's just what we have had this weekend.
I bet your wondering who is standing at this door. I'll admit, it was a few years ago, this is one of the photo's we had in the attic. Karina is a few years older, so is Mark. We no longer have our black Labrador Grace or little Pops.  Grace would also appear when her other name of Disgrace was used.
Pops was a rescue. I went to the shop one day and came back with a Cocker spaniel that I literally picked up from the road. It's a very long story, just lets say, Pops spent six happy years with us. We were so upset when she went. We were never ever going to have another dog.  Unless of cause it was female, black and white and a spaniel.... 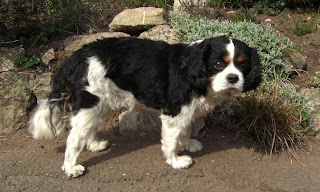 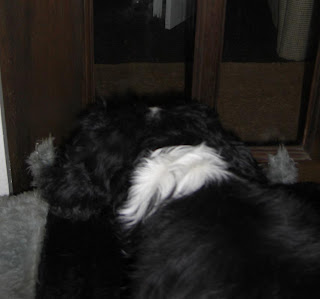 Amie might be an old girl now, but she is still first at the door when we have visitors.
Unless she's asleep. 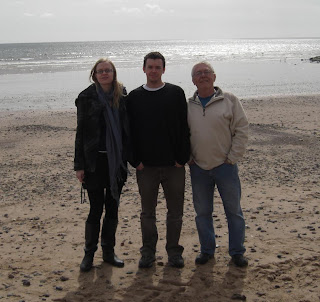 Quality time on the beach this weekend catching up with Becca and Mark. 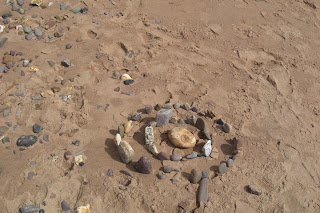 For all Stonehenge fans. 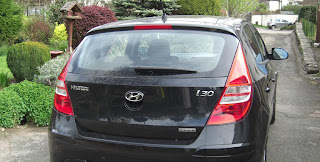 Becca and Mark have exactly the same car as us. Same make, same colour, same year. 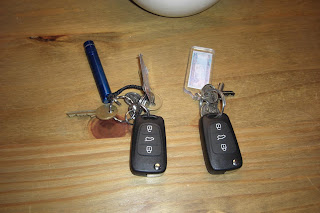 Even the same kind of keys. But not neccessily the same when the car keys have been swapped over.
We were a few days too late for April Fools day, although it had the same effect. Mark couldn't understand why he couldn't get into his car... 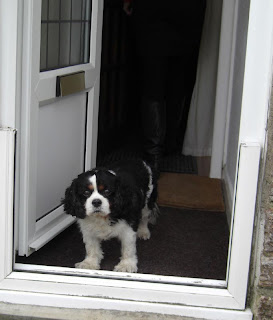 Not every one was fooled.
Say bye-bye Ames, we'll see Mark and Becca again soon.

There are lots of shaggy dog stories around, meet Bungle. A new dog on the block in blog land.
Posted by Soggibottom at Monday, April 04, 2011

I love that photo of you and your family. Bill takes rotten pictures, so we don't have many of me with the kids, lol. Isn't it nice to get out finally and spend time outdoors. Today we have rain again, but I need to clean and craft, so good day to stay in.

So many shaggy dog stories...

I like the mini Stonehenge. Rob gave me a cairn for Christmas. Some thought he gave me a pile of rocks wrapped up, but we knew better.

Awwww what a gorgeous family!!! Lovely to see Grace and Little Pops!! I'm so glad they found forever homes with you!! Yay!!

Awwww little sweet Amie!! What a great face to see at the door!!

Take care and glad you had a great weekend! x

It's always wonderful to catch up with family and enjoy the time together. Loved the old doorway photo!

Haha thanks for the worst picture of me ever...we had a lovely weekend, nice to see you both (and Ames/Frank/Mew of course), see u soon xxxxx

What a great photo of you with your kids and pups!! Oh, the memories. Glad you had some good down time this weekend. Ha Ha on the keys joke:) So wish we were closer to the shore:(

Sounds like a great April Fool. Love the Stonehenge. Happy Mother's Day on Sunday. Glad you had family around and the floor was down.

Good one, trying to start your car with the wrong keys. Who laughed the hardest?
Old photos are great. You get to go back to those times.

Now I know who to look for in China blue!

You little monkey! So glad life is returning to normal for you.

What fantastic photos, great stores, and a really nice weekend you all enjoyed!

Ames has that sad look Kodee gets when any of her humans leave. I used to have a black labrador too! Best dogs (whoops) along with Cavalier that is!

Great pic, dear girl - too funny about the keys, and I love Stonehenge on the beach, lol! Glad you had some time to visit.