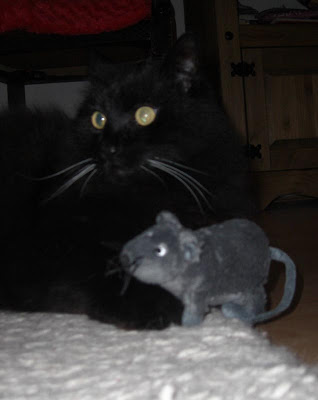 We know Christmas is near because the village church put up their decorations on top of the church roof. 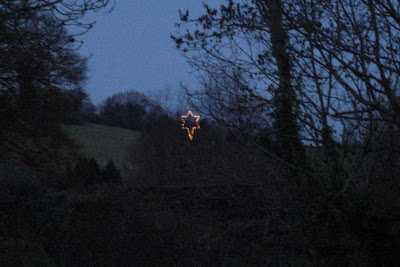 Sometimes it's a Christmas tree, it's a Star this year. 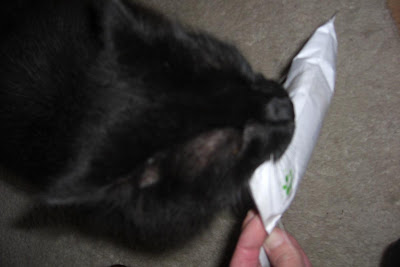 Frank is a cat, better remind you, C A T ... not a Retriever dog.
When there's mail for someone called Frank Fluffy Tail, believe me, it's not mine. 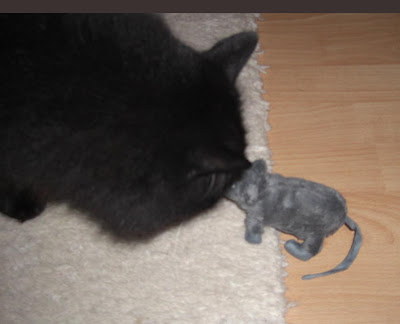 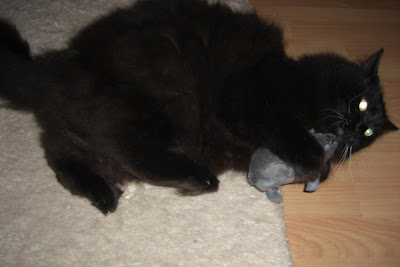 You know he isn't a tabby cat, I know that, but that is his name.
He could be mistaken for being called Frank Fluffy Tail. 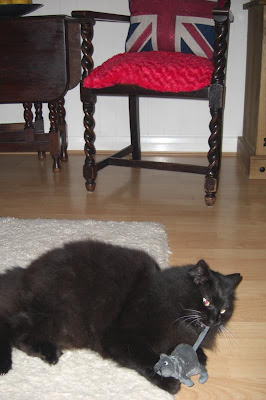 When you have undone your parcel and given it a good chew and pulled it's tail. 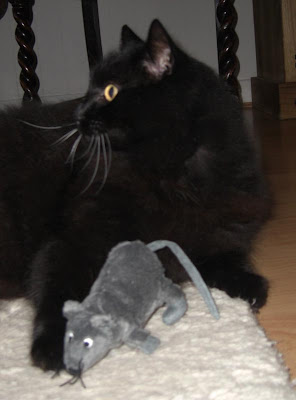 Given it the chance to escape even if it's not capable of it. 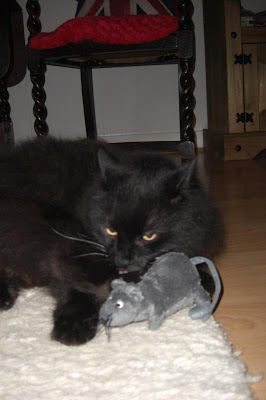 Given it a good wash if it needed one or not. 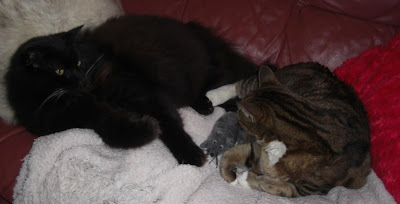 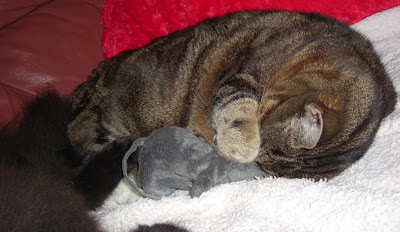 Not sure if Mew was really interested or she was trying to please Frank.
Nice Rat though.
Thanks Karina.
Posted by Soggibottom at Saturday, December 11, 2010

Lucky kitties. That's a great view you have of the church star.

I love that mouse, wonder what they have for my kitties. I haven't had a chance to hit the pet store yet, but moki loves toys and carrying things.

It makes me want to rush right out and buy a cute rat for my cat.

Oh me and Charlie love the twinkly star on the church roof!!! Lovely! take care
x

Frank seemed to enjoy his toy and how nice of him to share.

Looks like he also has a glass eye in the first photo!
(If someone could give a lesson in taking photos of one's beloved animal people without making them look like they have glass eyes, I'd be grateful!!!)
That ra-mouse is awfully life-like looking- great for your cat people, not so great if you come upon it suddenly in poor light....huh?
And shouldn't the title of this post have been Frank's got male???
Tee! Hee!

Give a cat a mouse and Christmas has come early!
The star is a pretty sight too!

Frank looks like he's really enjoying his new rat and he's awfully sweet to share it with Mew.
Our furry kids love their toys!

Aw how sweet, what a nice gift for Frank. :) So nice of him to share with his good friend Mew! Looks like they are both enjoying the new toy. Merry Christmas, kitties!

What a cute story you have told with those sweet photos. Looks like Frank was quite happy with his new little toy.

Oh, how sweet! Chum has a mouse,
on wheels, you back it up and it takes off all by itself! He hasn't
been very interested in it, lately.
Frank and Chum, sure look like twins!

such a sweet sweet mousie,,, and Frank is so kind to share...
little mouse is saying,, hey that is my tail your pulling.
How very cute of the kitcats and mousie
love
tweedles

Ah that was sweet of you to share your toy mouse! Siblings can be insistant!

That is the cutest post - I love to see kitties enjoying their toys!!!

Perhaps the real rodents can have a breather now Frank is otherwise occupied!
You are lucky this week - your postman must be run off his legs!

That's great. Tia has a knitted purple mouse which she has licked so much is now is all fluffy. We find it all over the house.

I love your kitties, and the story was so cute. The black one is my favorite!
Micki

It's sweet that one little present can make a little creature so happy. And afford the rest of us a smile.

Oooh, my kitties have the Ikea mice and they LOVE them... although I left the huge tags on because my one cat likes to lick them.
What the heck... a tag licker?!