I haven't quite finished with yesterday's posting. 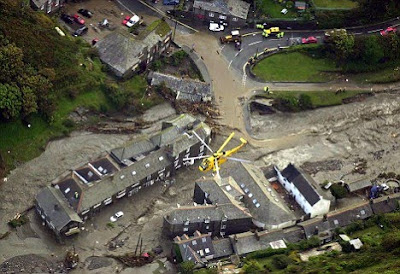 This photo shows the Cornish village of Boscastle in 2004 when a freak storm flooded the village. It wasn't the place to be at the time as people were rescued from the rooftops by helicopters.
Cars were washed away out of the harbour into the sea.


Although it poured with rain yesterday and hardly stopped it was nothing like the storm that hit Boscastle in the Summer of 2004.


We headed home over from Cornwall to Devon via Dartmoor National Park.
Our normal route blocked by a mobile home, we always seem to be lucky that way, being behind someone who has been reading their satelight navigation system.
Sat Navs aren't that useful around Devon and Cornwall as the roads are narrow, the small bridges narrower still.


It was good to leave the rain behind in Cornwall,


Back to our own side


Following smaller vehicles is much more our style.


Over bridges that were meant to take horse and carts.


There are still lots of foals around on the moor.

Lots of open spaces for them, except they wander all over the road.


I wish they would keep to the grass, they have enough of it.

But if they want to wander on the road, I wouldn't dare argue with them.
Posted by Soggibottom at Thursday, July 22, 2010

I'll take 2 foals and no flooding, please. :)
I figured you delivered on the thunderstorm so wonderfully, it wouldn't hurt to ask XD

There are free range cattle along the road to the mine where my daughter works and sometimes she just has to wait for them to move. The problem with following a vehicle is that the scenery never changes. It's better to be first.

Hmm... will have to figure out how to do long distance pony-wrangling.

Gorgeous photos - I just love wild ponies! Spent a day painting them in the New Forest for Watercolour Challenge a long time ago - it was brilliant!

I love the ponies but you're right - don't argue with beef!
Lovely views along the way!

I just love your area, it is so beautiful. I would love to spend a few weeks riding my bike. Since I do not fly, that would be tough to do;)

Midge
I love the photos you share and the stories you tell.
Your land is mysterious and magical to us. I am sure it was awsome in the pouring rain and thunder- especially if your with family.
The wild ponys are awsome and can hardly believe they are everywhere,
Do they belong to someone? Can you go get one?
love
tweedles

i have said it before and i will say it again. your part of the world is on my list to visit!!
xxrosey