Weather predicition for February 2014 in the South West of England 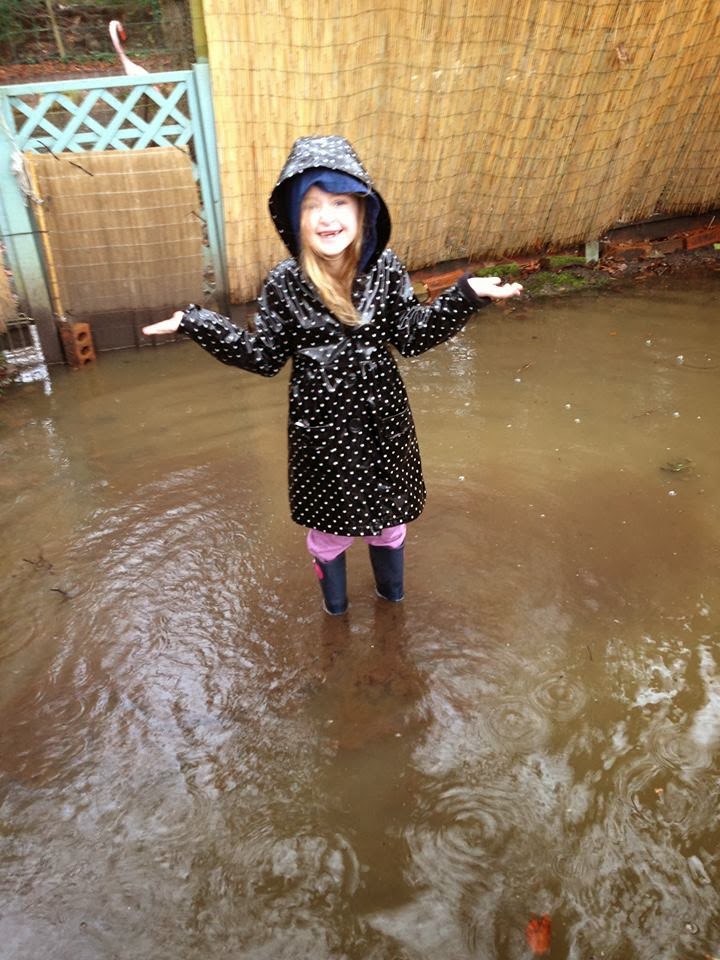 It's impossible to live in Britain without being preoccupied by the weather day by day and even hour by hour.
In the commuter belt of Surrey our little granddaughter stands at the bottom of her garden surrounded by water. Even the River Wey has burst it's banks along with other local water ways. 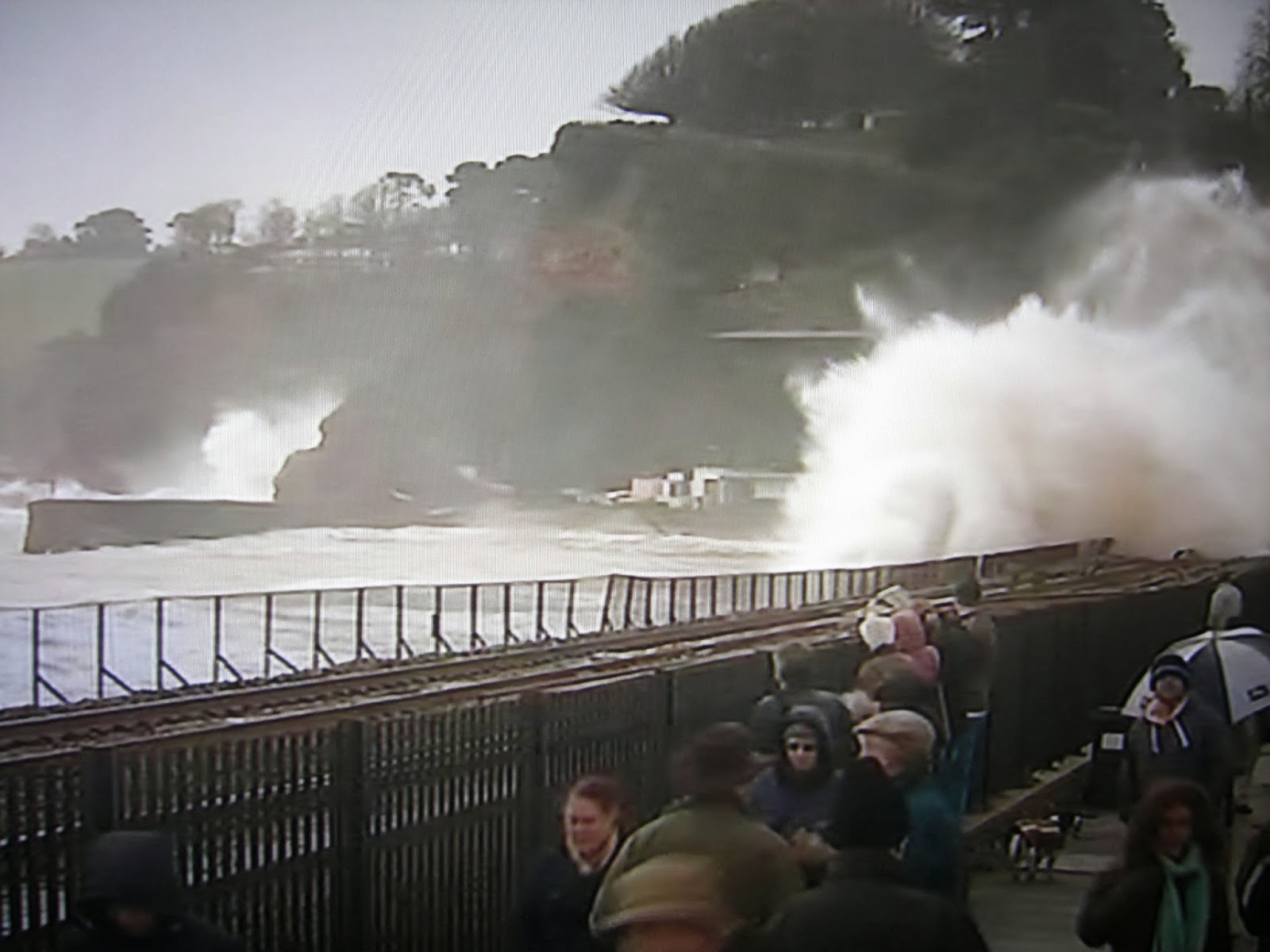 Here in the South of Devon high tides and flooding have again made headline news.
One part of the scenic Coastal railway line collapsed at the seaside town of Dawlish because of the power of the stormy sea battering South West sea defenses earlier this week. 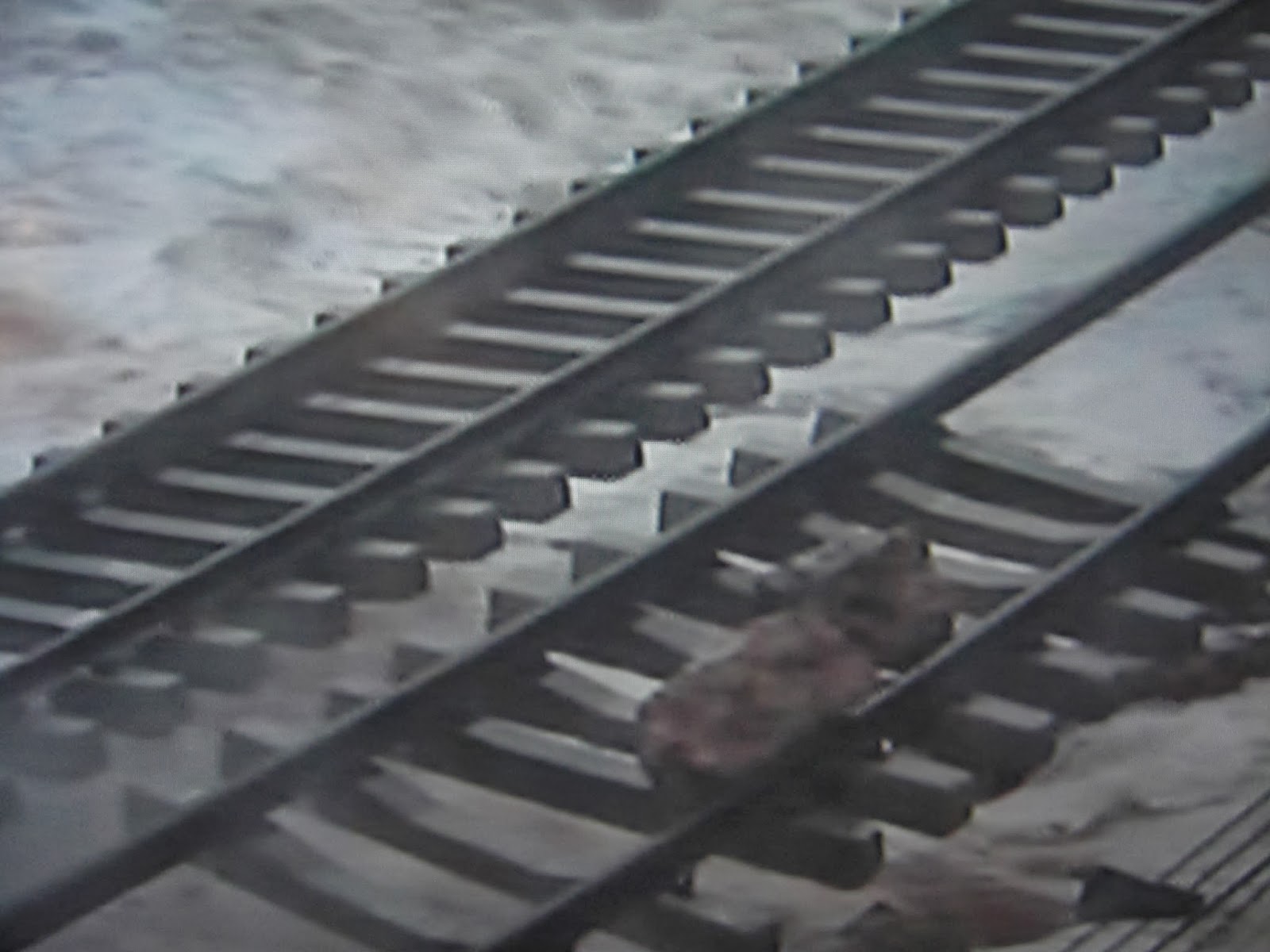 The railway line is going to be closed for weeks months. It's the main rail link from the rest of the country into Devon and Cornwall. 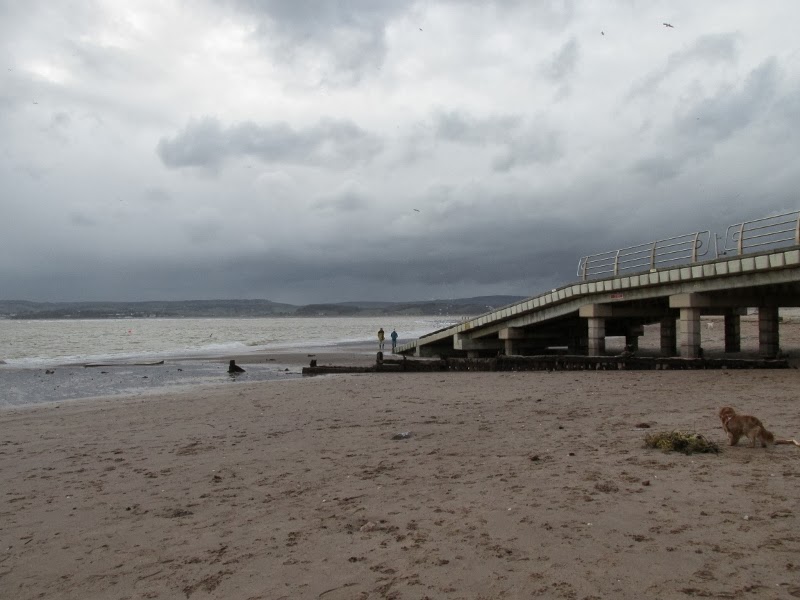 Even when there is a lull in the rain, clouds are never far away. From a quiet walk on the beach in a matter of moments a full blown gale appears. 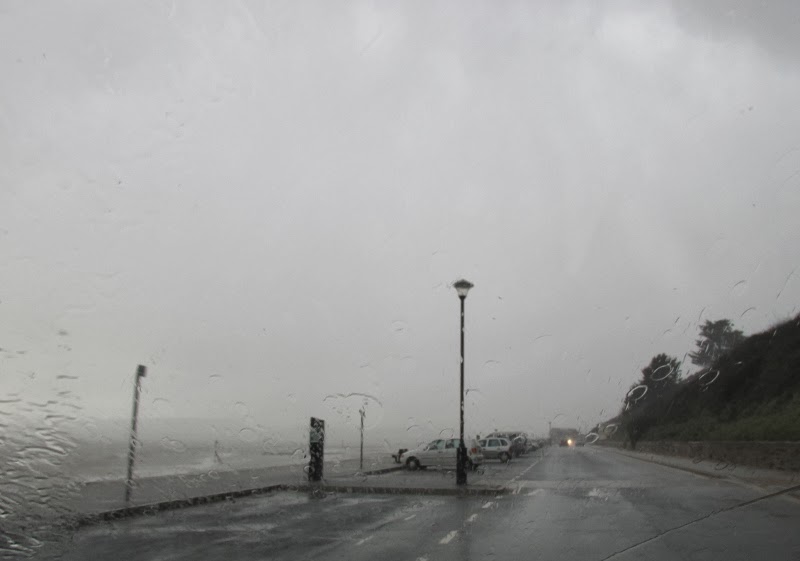 Taking a walk anywhere at the moment is a bit of a hit and miss affair. 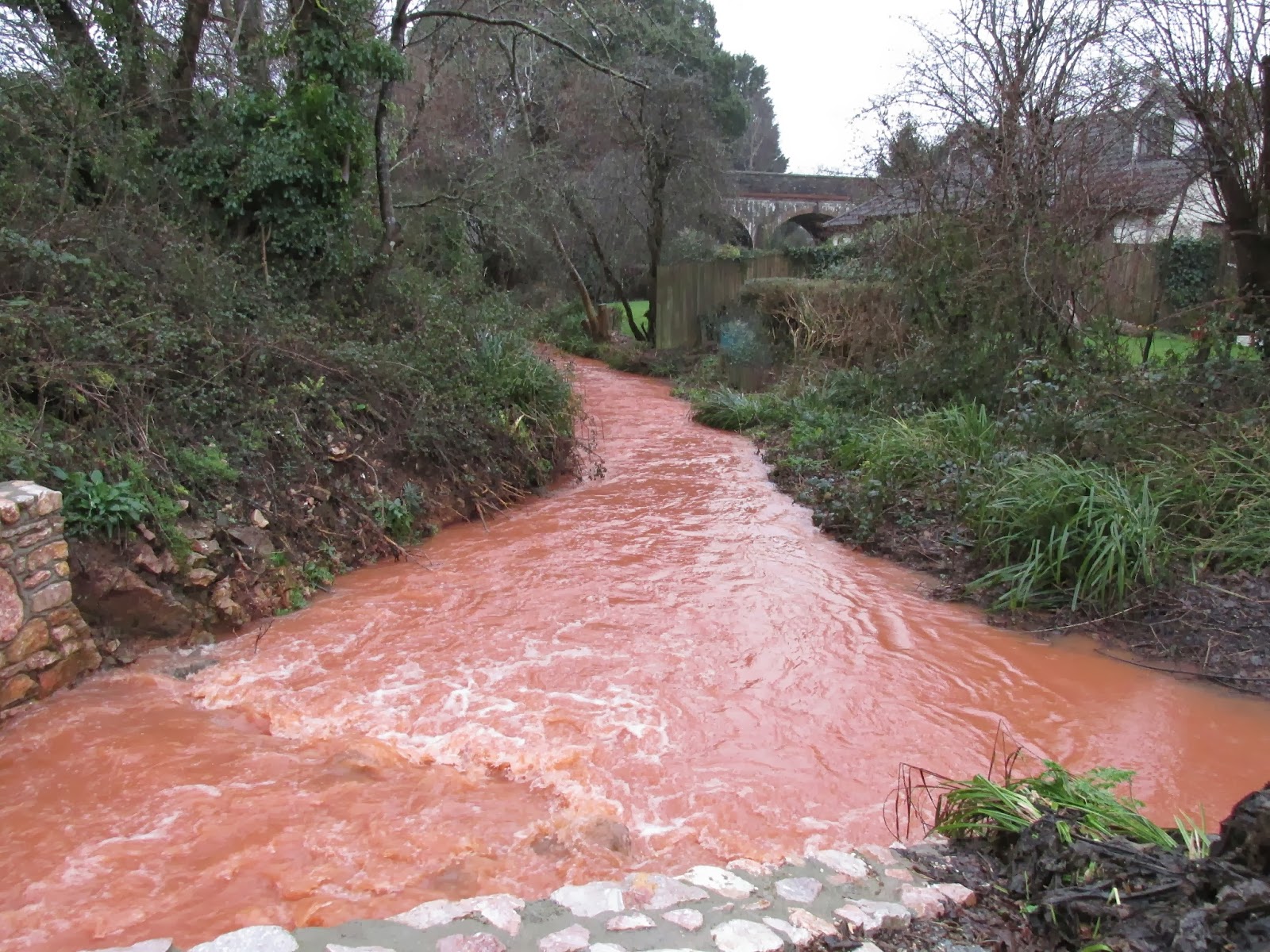 Soggibottom is very well and still has dry feet. Thanks to all those that keep asking, she is fine.
In case anyone doesn't know, Soggibottom is the name of our 17th century cottage. 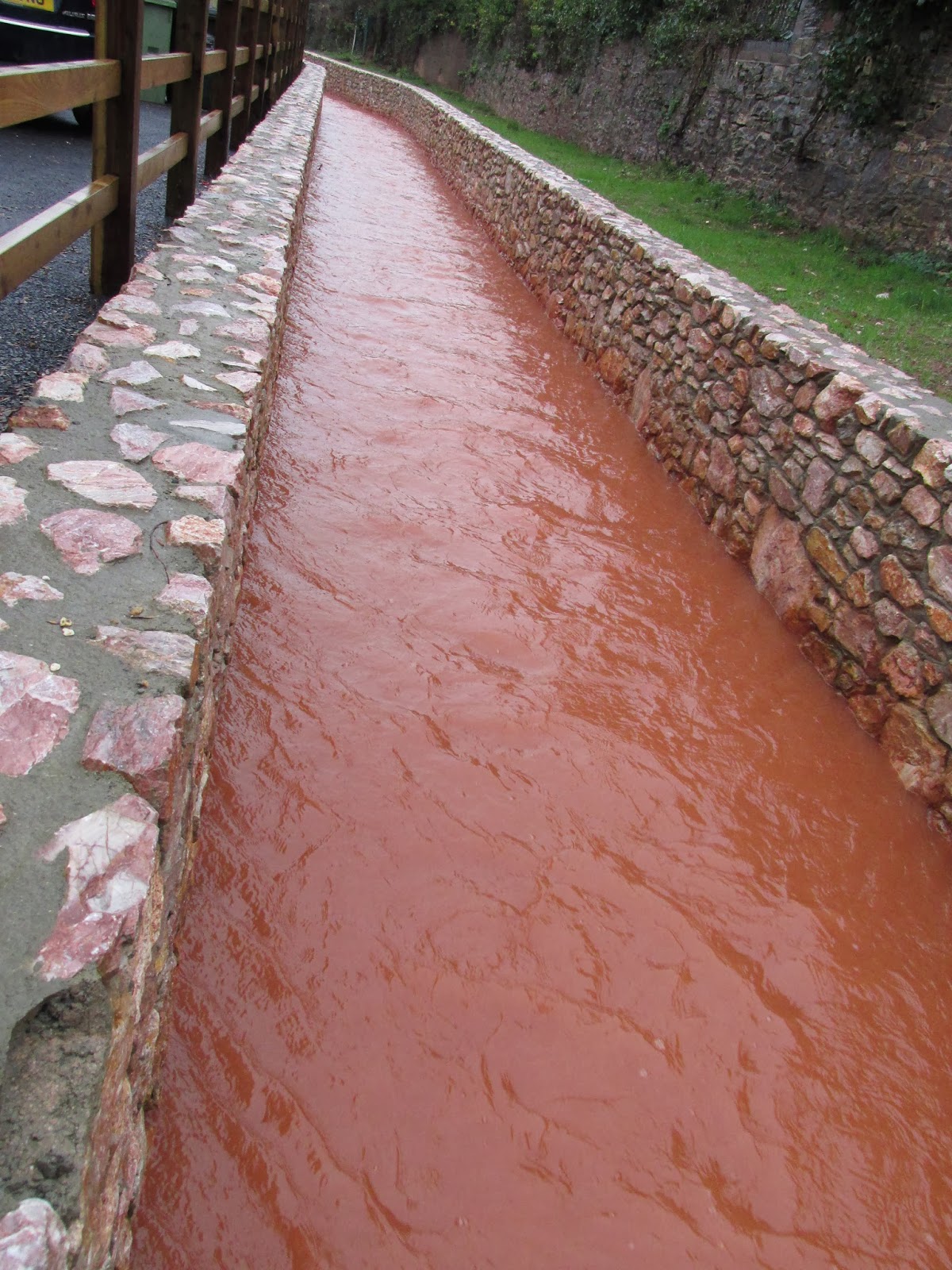 The new water relief channel, for all the upset it caused when being built last year, really has saved us. We think without it being there, the chances of  being flooded again last Christmas Eve were quite high. 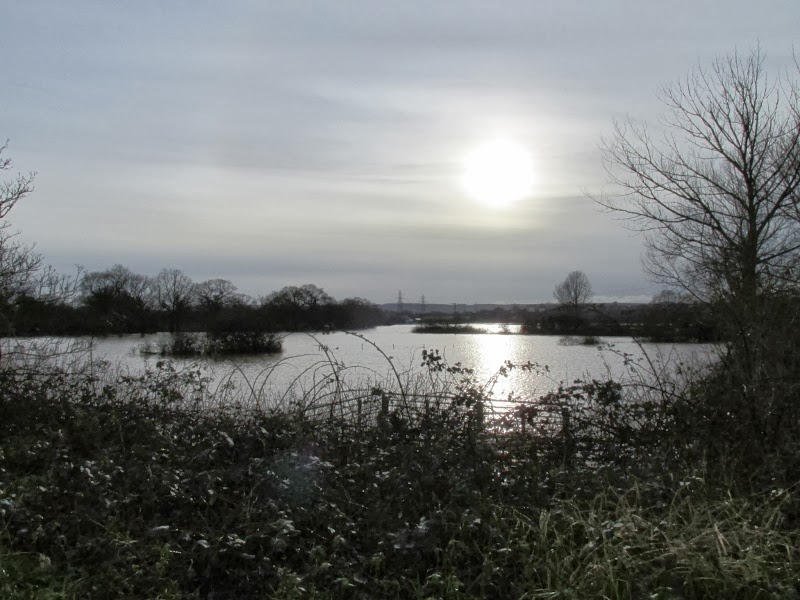 A quick snap of  flooded fields near Exeter yesterday.  No escape from water at the moment. 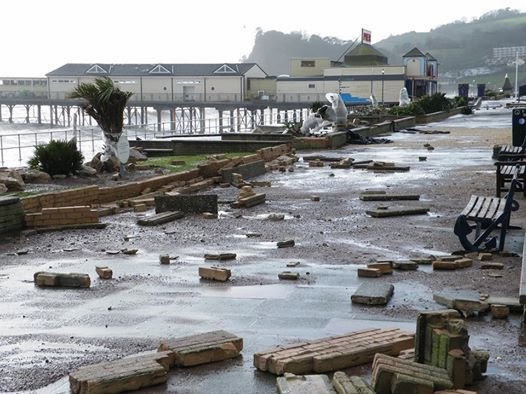 This is our route for a Sunday morning walk along to our favorite coffee shop in Teignmouth.  Another coastal town along from Dawlish that took a good battering from high waves.


Even the old pier was damaged in the storms last week. The photo above taken only two weeks ago. The one below after last weeks storm. 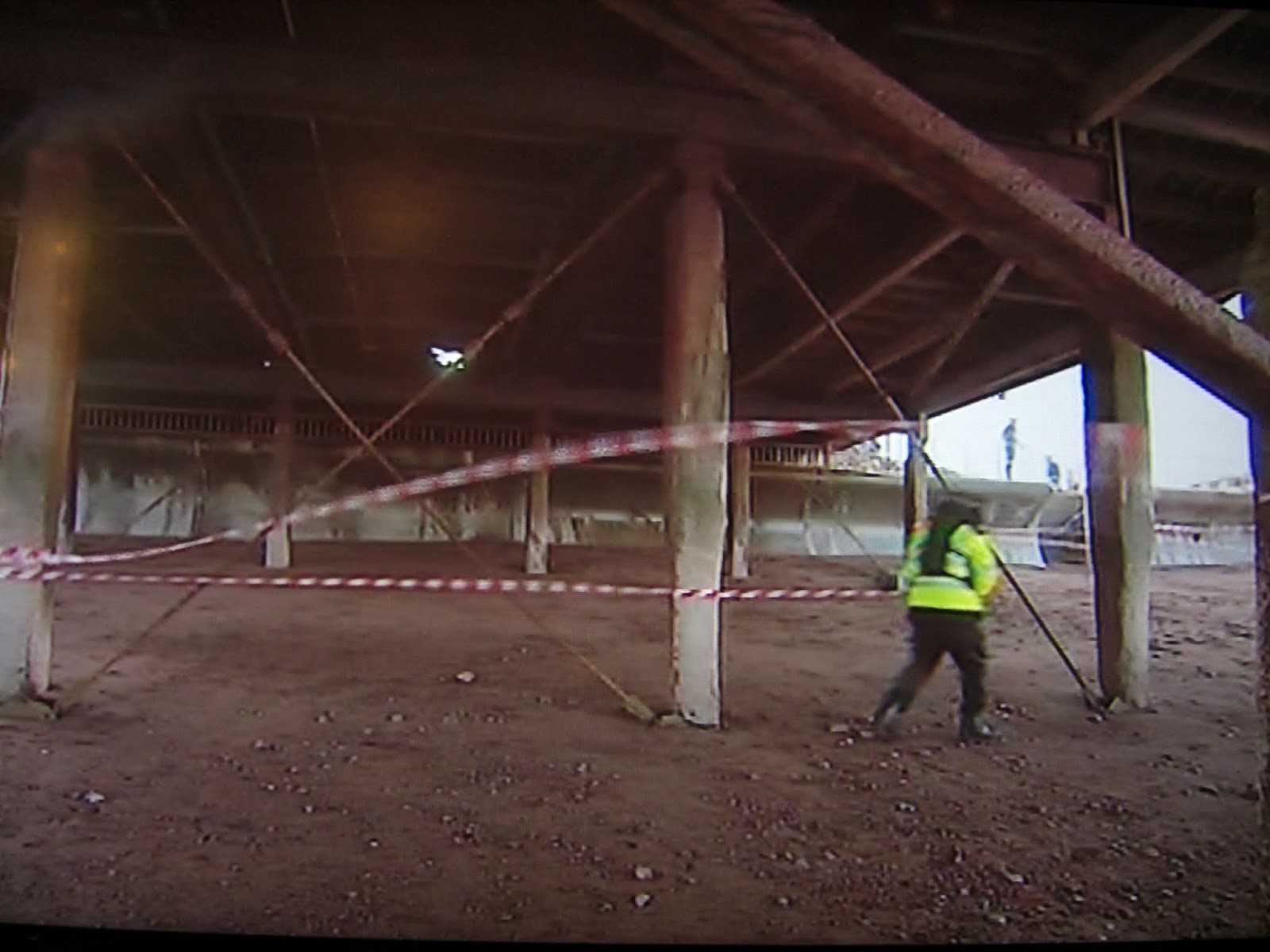 It might be a while before Freya goes galloping along the beach at Teignmouth.


Having our own home flooded, we know exactly how it feels when you can't stop water seeping it's way through the door.
The photo's you see of houses and places that have been hit by this year's floods are only photographs.
They can never convey the smell of brown water that is all around, it's not just river or sea water, sewers also overflow. Photographs of flooded houses and villages can never convey the amount of heartbreak and story that is attached to each photograph.


When the water goes down, the clear up operation starts. Every thing touched by water goes out of the door and never returns.  In our case things had to be broken up first because they had come in through the window, old cottage, narrow front door. 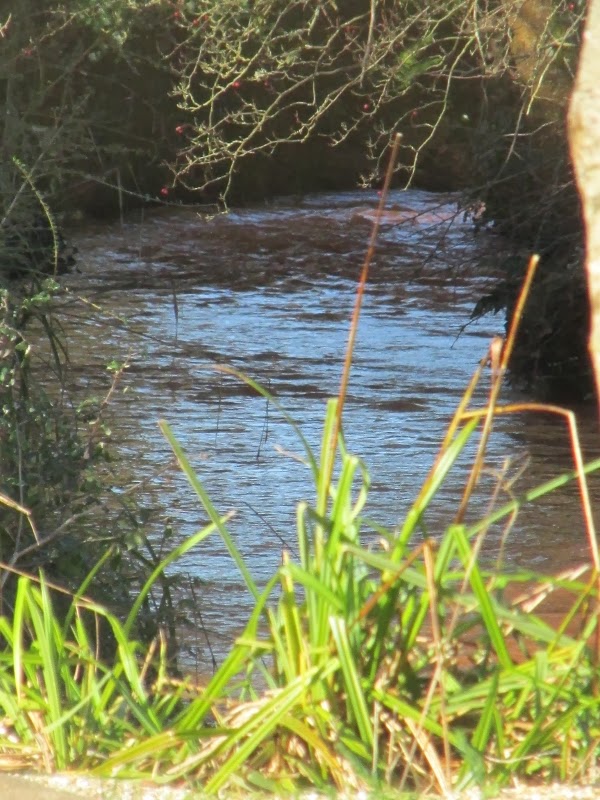 The lingering thought every time it rains, will the little babbling brook you live beside turn into a red raging torrent of angry water ?
The thought never goes away, there is always awareness that it could and might happen again. We know we have been very lucky not to have been flooded this year. Every rain fall, we are forever watchful, watching water levels around us.

On 1st August 1861 The Times printed its first Meteorological Office weather forecast. It predicted fine weather across Britain.  The first time we were flooded at Soggibottom was in 2006, the day before it had been a beautiful calm sunny day with blue skies. 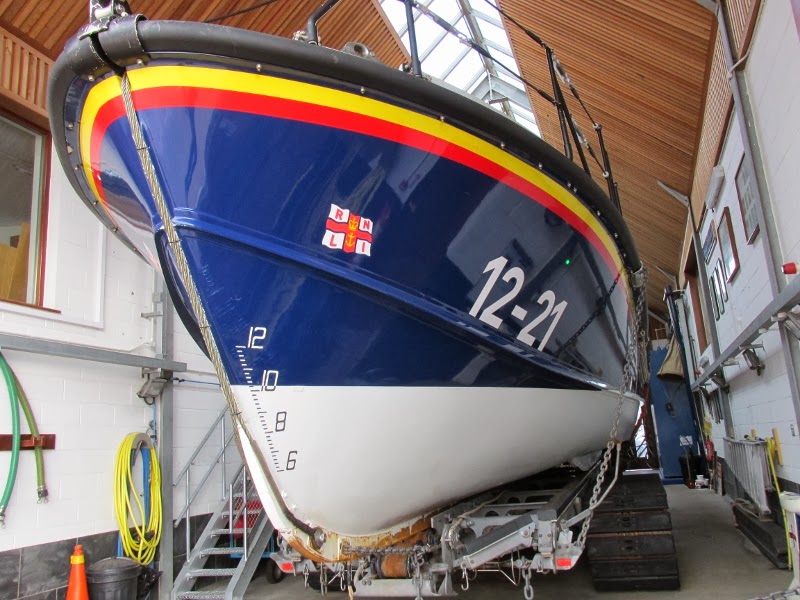 This is the life boat and new lifeboat station at Exmouth. 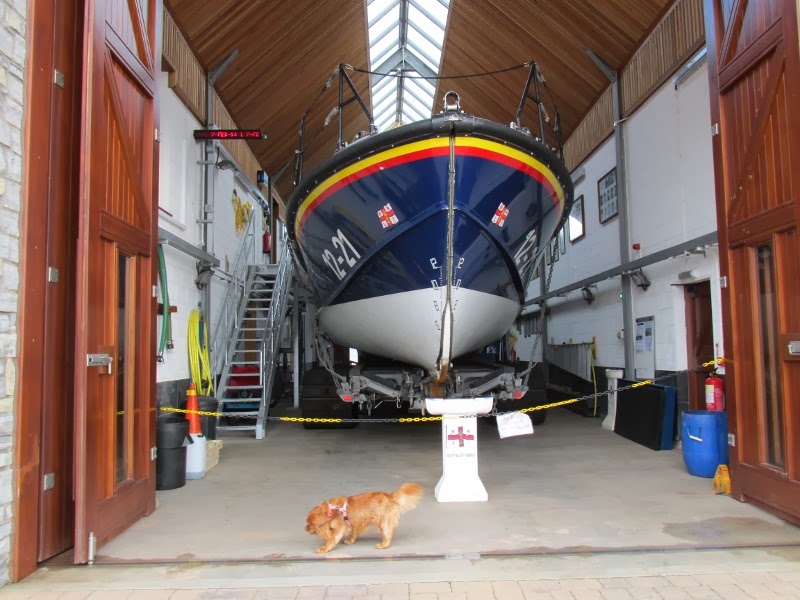 Maybe Freya is starting to queue making sure she is first in line. All in line behind Freya. 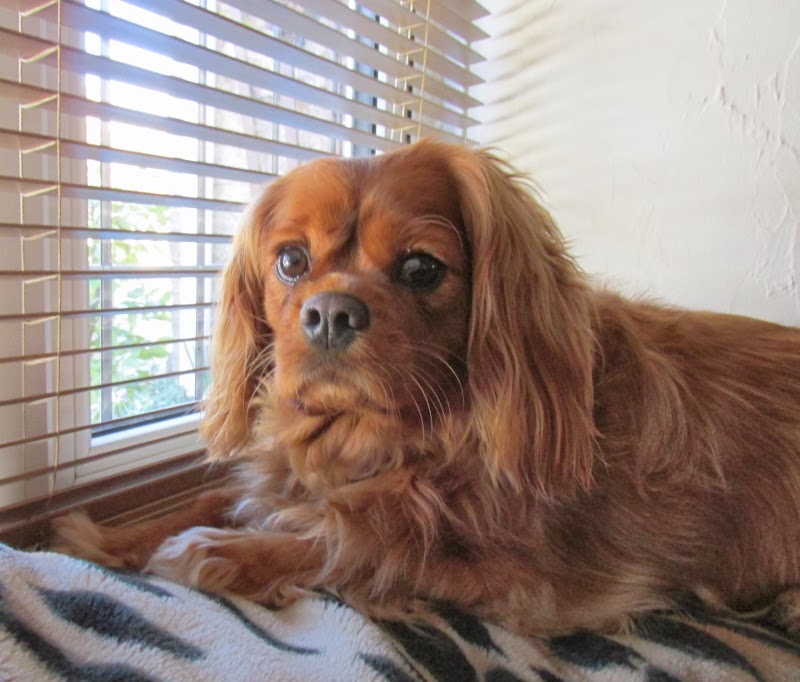 Who, apart from being in the cottage window seat, can be found on her own blog CAT FLAP CAVALIER, just HERE.

That the darkest hour of the night is just before the dawn is a consoling proverb implying that nothing is all bad and improvement is always possible.
Keep dry, keep warm and most of all keep safe.
Posted by Soggibottom at Saturday, February 08, 2014

So pleased that you have escaped this time. I have been worried about you's. Looks like that relief channel is doing it's job, good thing to. I am not trying to rub this in or anything but we up in the North seem to have missed the worst of the weather again. We live on quite high ground. Still have to don the wellies when we go out cos the ground is soaking.

I'm glad to hear that the relief channel saved you. You're in our thoughts during this hard,stormy time...
Stewey and his mom

I'm so relieved to hear that so far all is well at Soggibottom as I have been thinking of you as I watch the news. Your pics make the destruction all the more real and devastating.
Freya definitely has the right idea at the lifeboat!!!
Best wishes!

Mother Nature is sure angry for some reason. We have gusting winds and it forecast to get much worse.

Gosh, we sure are glad that you have that new canal. That looks like a great thing and well built. Gosh we feel for all those people getting flooded out. Hope those rains slow down for sure. Great pictures though,
Take care.

I am so happy that the new system is keeping you dry, it looks like quite a mess. That is what it looked like in our areas when we had the bad hurricane floods.

I've been reading about these incredible storms in England on the BBC web site, and seeing some scary photos. I'm glad you're okay. Our state was affected by terrible flooding last summer (over 1,800 homes were completely destroyed and over 16,000 damaged), so we've seen the results up close.

WOW, sure looks like your country is going the sea, hope you guys get that over with soon!

Glad that you are ok , and hope those storms never come back

I'm impressed at the amount of water the flood channel is diverting. Thank goodness. I'm glad to hear that you're still safe and dry:)

We want you and your gang to be dry and happy this year, nothing at all like last!

If I were you, though I'd want to be second in line behind Freya!

We are so happy to know you are not flooded. We had our basement flood once because our sump pump died in the middle of some heavy rains, and it was a mess. We feel badly for all the people there who are so affected by the weather. Stay dry and safe.

And we want to also say we are glad your okay. You have all had your share and beyond,,
So much water-- but it needs to stay where it belongs,
love
tweedles

It's all getting a bit Biblical - water levels rising here too but nothing like in your corner of the country. Glad the culvert was worth the pain, stay dry!

We have been thinking of you every time we hear the news. Thank God Soggibottom is OK and you are well and safe. We too have nowhere to go as our park now is just a muddy mess with puddles that are like ponds and lots of trees down.
Have a serene Sunday and make time for some big easy today.
Best wishes Molly

After our little flood last year, I get nervous each time it starts to rain. So far we're nice and dry.

Those photos are unbelievable, for all our rain and flooding, I don't think it has ever been this bad.
Very glad to hear you are okay.
Dip and Elliot x

I am pretty happy for you that so far that canal is holding the water back this year! Fingers crossed it continues to do so.

Glad to hear the water relief channel is working. Unfortunately floods are headed my way and I wondered if your floodshield ever got tested? Would appreciate it if you could let me know. Thanks

Looks like that channel is doing it's job. You really have had your share of rain. I hate to see what all this snow melting will look like. But we will make it for sure. At least we still have power at this moment. Take good care.