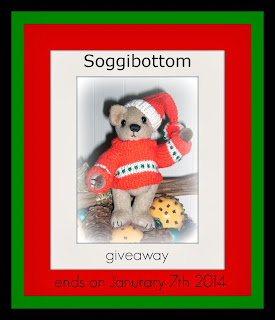 The Soggibottom giveaway is to mark our 1000 cottage post.
It has been extended into January. As Soggibottom normally posts a giveaway on the 7th of December to mark the cottage birthday and missed this year's deadline.
I hope everyone is happy with the giveaway ending at midnight GMT on January 7th, 2014.
The draw taking place on the 8th January 2014.

I also ask that you share the giveaway by letting all your own friends and followers know, either by putting it on your side bar or by letting everyone know by a post.
It's Christmas and it's about sharing.

That's it. Then your entered.
I do check, as most of you know, so no sneaky stuff :-)

One more thing, the bear will travel, he isn't limited to one continent and will travel to anywhere in the world. 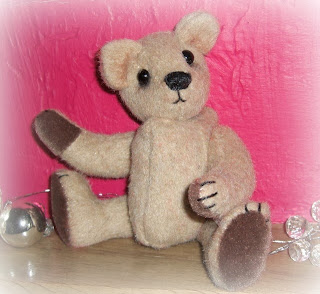 This 7 inch little guy's pattern has been adapted from a 1940's pattern .I have a fondness for older patterned bears.
He has a sweater and hat to keep him warm on his travels. 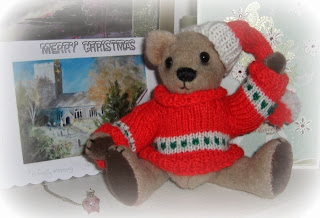 The cottage is now 345 years old, restored loving by us after flooding a number of times over the last ten years. Hopefully Soggibottom will keep her feet dry for a few more years and Christmases to come.

Freya Rose Blossom and Frankie de tabby can be found over at CAT FLAP CAVALIER. They are still opening all their Christmas mail.
Little did we know when they joined a Christmas card swap list they would both be so popular. They have more Christmas cards than us. 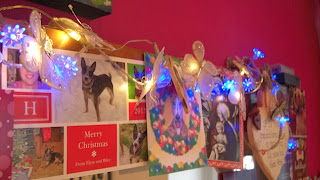 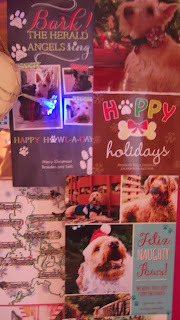 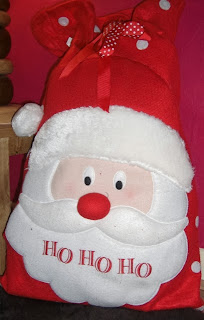 Happy 1000th post. We look forward to many more. We just wanted to add the blanket which Pip loved so much is a real source of comfort to us and we are truly grateful.
Have a serene Sunday and enjoy the big easy.
Best wishes Molly

That is awesome :), Have a good day

He is cute little bear and I love his jumper.


These prove you are not arobot numbers get longer and longer but at least I can read them. :)

Congratulations on 1000 posts!
Merry Christmas from a wet and windy Gloucestershire!

Carla A Few Of My Favorite Things said...

What a wonderful little bear! Happy Anniversary and Merry Christmas!

I think I'm comment number 7 which is also my lucky number. Happy Christmas to all of you and I know I owe you a nice long email.
Love Sue and the pack

Wow, 1000 posts! I only did about a third of that. I hope you and the gang have a wonderful Christmas! We will be alone, this year, but will talk to the family.
I guess the Grinch stole Christmas, this year, for I didn't even get the cards sent out, that I usually do....Bah Humbug!

Congrats on 1000! I'd love the little sweetie to cross the ocean and live with me..smile..Hope you all have the merriest Christmas!~Amy

Congratulations on 1000 posts! I would love to have Bear come live with me in Arizona. I think he would have fun playing cowboys with dh.

Just sending you love and hugs! Wishing you and the family a very Merry Christmas!

Merry Christmas to all there from all of us here.

Congratulations on 1000 posts! Thats a lot!
You did a beautiful job on lil bear. I know he is ansxious to go to his new home. Someone is going to love him so much.
We have so many beautiful things from you - so please do not put our name in the drawing, We want someone else to have a chance to hold the beatiful things you create!
love
tweedles

What a cutie of a little bear! Anyone would be lucky to win him. Since I was lucky enough to win your last giveaway, I won't enter this one, but good wishes to the entrants!

Happy Christmas to all at Soggibottom!

Merry Christmas to you all down there - as we have two Soggibottom creations already, don't put our name into the hat this time. Good luck to everyone else though, a Soggibottom bear is definitely worth having!

Just popping in to wish you a ver happy Christmas. Hope it is not too rough weather wise at your end. Love your little give away

Oh dear I almost missed this. We had a bad storm and a very long power outage so I'm trying to catch up:) I will post on my sidebar for now and then do a post on my blog when I get a chance.

1000 posts is a lot of posts! Happy Anniversary and Happy New Year to all your two legged and four legged friends and family at Soggibottom :)

We stopped by to wish you a very Happy New Year!

Hope your new flood channel is working well and that you have a great 2014. xx

Wishing you a happy, healthy New Year, every last one of you!

I love the clothes for the Giveaway Bear and can't wait to see who wins him.

Dear Midge, wish you a very happy new year! May all your dreams come true in 2014!