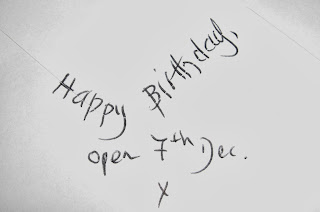 Can the year have gone by so quickly ?
Another anniversary of us moving into Soggibottom. Wow, what a birthday present I had that year.
If I tell you how long ago it was, it will age me even more, so lets say, it seems just like yesterday. 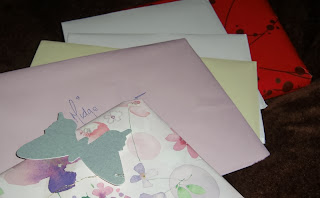 I waited a whole quarter of a hour into December the 7th last night to open some of my cards.
The black Labrador pup I have been dropping hints about, didn't happen. Frank de tabby would have given it, a dogs life anyway. Poor pup would have been licked to death. 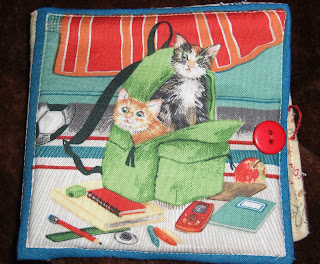 I had a needle case from Wendy and her beautiful cat Tia. Thanks Wendy, it's brilliant.
As well as other beautiful sewing related gits, makes me wonder if someone is trying to tell me to get back into a creative mood. 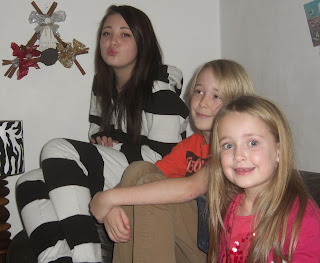 We had a great day out visiting three of our grand kids during the week. Not sure what they are fed on, but they get taller each time we visit. Thanks for such a great day out guys. 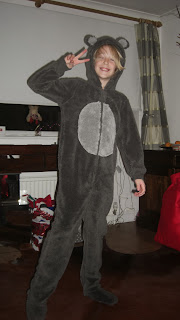 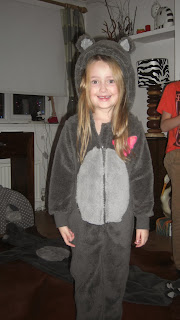 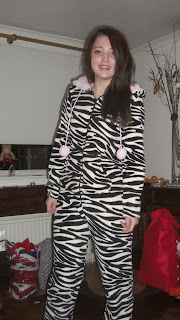 Our car was loaded down like Santa's sleigh.
They all opened one present, besides, we will miss seeing them on Christmas Day, and it should be Christmas Day every day of the year. I can see our daughter laughing at that suggestion. 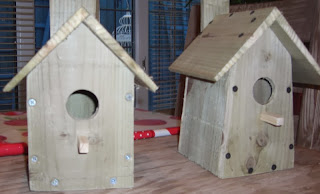 The Soggibottom Carpenter has gone back to work, building new houses for the birds.
They are to replace the one's that were taken down when the large Ash tree outside of Soggibottom was felled to make way for the new water relief channel earlier in the year. Hopefully they will go up before the cold weather hits us down here in Devon.
Birds still like to shelter and huddle together in boxes like these when Winter temperatures tumble.
One slight problem, the Soggibottom carpenter will now have to climb down into the water channel, climb out the other side to put them up, as he often tells me he's, "just like a cat" when climbing, I won't worry until I have to go and help him out of the relief channel. 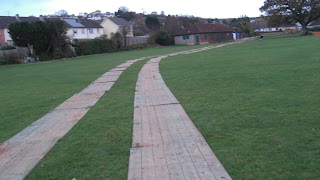 Around the park at the back of Soggibottom the road guys have started a new project. A rolling road no less. They are still working on the stream further down at the other end of the park, but why oh, why couldn't they have used this last year instead of doing so much damage right beside us ?
As they say, that's water under the bridge, time to move on towards Christmas. 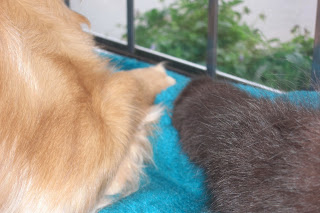 The terrible two, Frank and Freya seemed to be joined at the hip lately, where one is, the other follows. I think that has something to do with the postmen and all their Christmas Cards that have been arriving.
We have three, they have a whole pile of them.
You can find them both, over at CAT FLAP CAVALIER 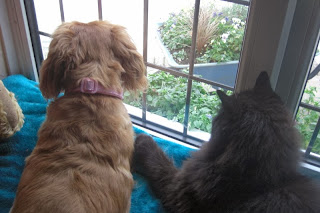 At this time of year, Soggibottom normally does a giveaway. There will be one, but in January next year.  I won't forget. 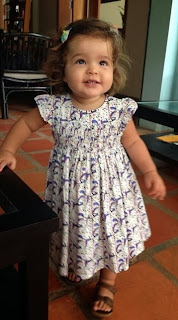 One last photo, one I found on the net, of our youngest Granddaughter. She's growing up quickly, at this time of year Cambodia seems a terribly long way away, and it is.

Have a great day, even if the sky is darker than normal because of the weather, you can always go and stand under some Christmas lights to bring the sparkle back to the day.

Thanks again for all the birthday wishes and cards. Midge x x x
Posted by Soggibottom at Saturday, December 07, 2013

Hope all is well and that the storms have missed you. Seems like they will continue with high waves all weekend. At least this year you can enjoy planning for Christmas.
Have a super Saturday.
Best wishes Molly

You had so much fun , and so many gifts and cards :) You guys look so cool in those outfits

Happy Birthday, Midge and can't forget the cottage is another year older, too! You have beautiful grand children. That's funny, that the cat and dog have more cards! I need to be working, so off I go....

Your grandkids are beautiful and all have lovely smiles. I bet Soggibottom was celebrating having you living in her. Happy Anniversary.

You are most welcome. Tia has tried sending you a video but it seems its too big for Virgin to cope with :(

Those bird houses are rather nice. And littlies Grandaughter looks so cute :)

Congrats, Midge, on all things. Such a good year born out of a not so good one!

Your Grandkids are lovely and I would willingly snitch that littlest one!

Love the cat fabric on your case, that is so cute and the kids jammies are adorable.

Sorry you didn't get your pup! Maybe next year, eh?

Oh Midge I missed your birthday...I feel terrible...I hope it was a very happy one, I'm so glad to see Soggibottom back to normal peace and quiet.

Happy birthday weekend to you!!! Yay!!

What a year for you and Soggibottom! But you all made it as intact and sane as possible! That alone deserves a great big CHEER!!! Yay! Take care
x

Happy Birthday to You. May all your dreams and wishes come true !!!

Oh no,sorry Midge but I missed your birthday. Hope you had a great day.

Can we still wish you a Happy Birthday?!!!
love
tweedles and moms

A belated happy birthday to you

All the girls are beautiful but that little one begs to be hugged. Love those chubby cheeks.

My dogs are way ahead on Christmas cards this year. It's cute to see Freya and Frankie so close in the window.