Never put off for tomorrow the things you can do today


Never put off for tomorrow the things you can do today. The saying goes something like that, or, in our case, put off the things you should be doing until tomorrow and go out.
The splodge in the middle of the photo, isn't anything on your screen. Don't go trying to wipe it off, it's a rain drop on the camera lens.


Living in the South West of England does have it's advantages even in January. This might not be the height of Summer, but we had the beach almost to ourselves.


Going across the Dartmouth ferry yesterday things were a bit grey.


We drove along the coast road, pass Blackpool sands yesterday. Why they call this beach Blackpool sands we haven't a clue. No sand here, the beach is made of small pebbles. It looks even better from this view in the Summer. Except the place is always very full in June, July and August. NO DOGS ALLOWED.


We normally stop further along at Slapton Sands. No sand here either, the beach is made up of the same small pebbles.


This was the beach we were headed for yesterday, Bigbury Bay and Burgh Island.


The Pilchard Inn looked very quiet yesterday. The tractor that normally takes holiday makers across the causeway when the tide is in had been safety put away for the Winter.


A whole post not mentioning anything to do with dirty coloured water.

Two weeks into January 2013, the cottage garden has bulbs starting to sprout. We even had a daffodil in flower, unfortunately some bug got there before I did and promptly devoured some of it.

For all those that ask after Frankie de tabby. At the moment he is fine, just as fluffy and cantankerous/catankerous as ever. He hasn't brought in any of his furry friends to play with lately, so that's a blessing in it's self. The novelty of dashing around after one of Franks live catches soon wears off,  especially when the mouse always seems to get the better of you.and gives you the slip. The hours we must have spent, because no one goes anywhere until Frank's furry friend has been caught and taken outside again.. alive if we can get to them before Frank. 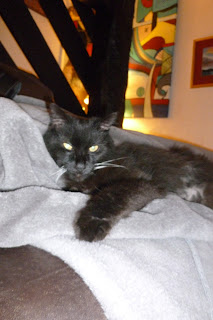 He has elevated himself from sitting on a concrete floor before Christmas to a place that is slightly higher and more comfortable as you can see.
Most things in the cottage have returned to normal after last October and November floods. The laptop sits in a place where Frank finds it easier to walk across the keys as I type. That's not so good as he still has large heavy paws. 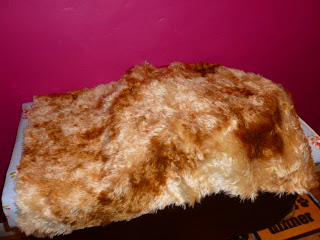 
Freya is well, full of beans, we still need eye's in the back of our head for some of the things she gets up to.  I wasn't going to mention she managed to devour half of a ten pound note a few weeks ago. No side effects or lose change in return.
At least she left the serial numbers so that was something to be thankful for.
She is up and about and over at CATFLAP CAVALIER.
Freya has a television fetish at the moment, some dogs do, some don't. There is never a day that goes by without her making us laugh, ten pound note or not. She has grown into a beautiful bold, outgoing, brave, faithful, fluffy headed, sandy pawed Cavalier, just as she should be, we wouldn't have her any other way.

Posted by Soggibottom at Tuesday, January 15, 2013

The last pic is so cute. Such an innocent face! Have a terrific Tuesday.
Best wishes Molly

Awww great to have these beautiful pebbled beaches all to yourselves!! Even if woofies are not allowed! Maybe you can disguise sweet Freya as a bear?!?! LOL!

You are so lucky to have access to these wonderful beaches - I prefer a winter beach to be honest!
Thought for a minute you had skinned Freya! A bear or a mini-me cavalier?

Michele, I just LOVED this post - all the pics of the scenery and the best pics of all - your babies.

That was so funny, and who can get mad at a face like that, lol. I wish I could get out, but I enjoyed going for a drive with you and enjoying the beautiful beach.

Thanks for the Frankie update; always like to hear about him as well as his furry housemate. The beach pics look great.

Thank you for your beautiful beach pics.. You sound great and it was good to hear from you..
Blessings my friend..

You did it again- and showed us your beautiful world.
We shivered by looking at the feet in the cold water- but no snow!
Oh how we would love to walk on your beach with you.
Freya is more and more beautiful each time we see her.
love
tweedles

Luvs to Frank and Freya from Tia (and you of course )

oh I do envy you living in that part of the country. I can never forget some of the wonderful holidays I have had in those places. Beautiful scenery. Thanks for sharing.

Great photos!! Gosh I'd love to have such beautiful countryside and water in my back yard... to dream...
Glad to hear things have returned to normal at the cottage.

We love all the fun photos! What a fun time at the beach. Do you like the snow as much as we do?

Do you really WANT some snow? Usually this time of the year its deep, like 3 or 4 feet, plus little mountains made by the snowplow going by. But this year its very different. We only have inches of snow where before we had feet. This week we are getting an Artic blast of sub-zero weather, too cold for anything!

Freya and Frankie de are looking fine and comfy. I know your fall was very tough on you but I hope things are going to be good for the rest of the winter. Your beaches are beautiful!

Oh, I miss the sea! Thank you for the photos!

Gorgeous beach photos! I don't think I have anything that nice around here. Um yup thanks for not posting Frankie's catch ;)