The black swans of Dawlish and Freya Rose Blossom 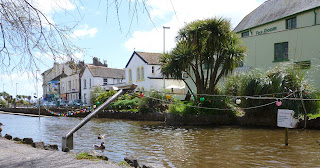 We've not been up to anything fantastic this week, dawdling around Dawlish and taking a certain mutt to the beach have been the highlights.
It's been too wet and too cold. I thought it was supposed to be May. 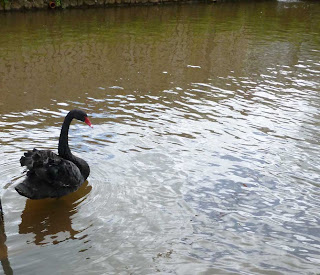 As Freya seemed far too interested in the swans on the river Dart last week and wanted to get up close and far too personal, we thought it would be a good idea to introduce her to some that are used to people and dogs.Just like to add that Freya was on her lead at all times around the water birds. 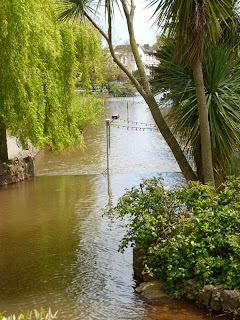 The little town of Dawlish in South Devon has a wide water way that goes straight down the middle and divides the town,  ideal for water birds of all description. Their favourite food is lettuce and brown bread. At least that is what the sign said. Although they probably all get a good share of other things that aren't so good for them. 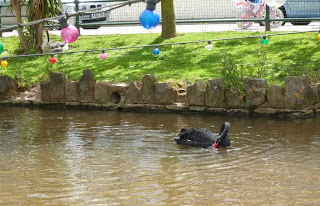 Dawlish is known for it's black swans. They are really native of Australia, brought over to Dawlish by John Nash a guy who was borne in Dawlish and then emigrated to New Zealand.
The swans are known as a pest in Australia, not so in Dawlish, they have been the town's emblem for over 40 years. I promise there is more than one, the rest were asleep and weren't interested in the camera. 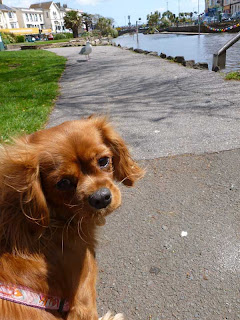 It's always a good idea to introduce your pup to new things slowly and always make sure when you do, your pup is under control at all times. 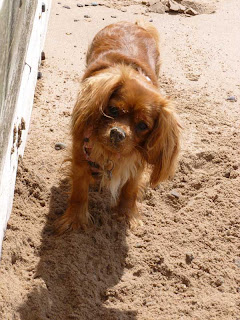 We all know where Freya would rather be, you can see her over on her blog the catflap cavalier.
Lots of running around and even a video.
Posted by Soggibottom at Thursday, May 17, 2012

I have never seen a black swan, the ones we have here are not native either and they are taking over the breeding grounds of our swans, so not good.

I've never seen a black swan either. It's like going on vacation visiting your blog. That's great for a hermit like me. Freya with the sand on her nose is sooooo sweet.

I adore black swans! There's a pair living on the River Lea and they are tinier than the white swans but ten times as territorial! LOL! They are stunning!!

Awwww sweet Freya! You have such adventures!! Take care
x

We have never seen black swans. They are sooo beautiful. If I was a swan, I would love brown bread too.
love
tweedles

There used to be a pair of black swans that lived and bred every year on the pond at Papworth Hospital near Cambridge, the famous heart hospital (I lived there for two years - in the village, not the hospital!) They are very territorial and their cygnets, once they were old enough, were caught and relocated every year as the pond was only large enough to support two and they get very aggressive over territory apparently. Last time we went back to visit, there was only one there, we were told he lost his mate last year. I wondered if they will relocate a black swan back from elsewhere to keep him company.

Great photos, that looks like such a pretty area.

Binary Options is the way to [url=http://www.brokersring.com/]make money[/url] securely online