January 11th - Back to Bigbury Bay. 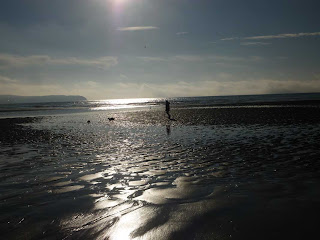 The sun was shining, the birds singing, the start of a clear blue sky January day, too good to stay inside. 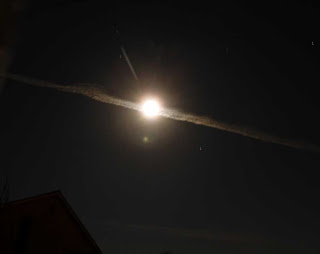 There has been a full moon over the last few nights, which meant today the tide was out further than we normally see it around Bigbury Bay. 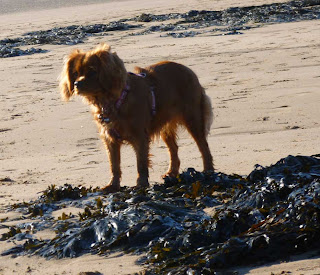 More sand and space for Freya to dig and run around on.
Making sure she digs around in the seaweed first of course. 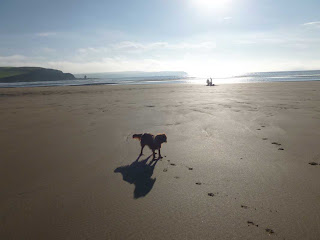 Look for crabs in rock pools. 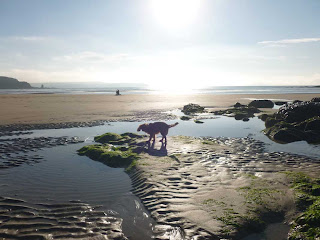 We're still not sure how we spent 6 hours on the beach, especially in January, but we had a good time.
Who says January is dull ? 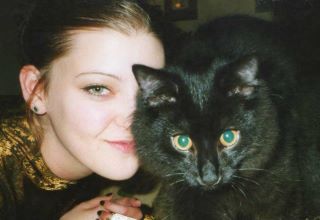 It's Karina's birthday tomorrow, the 12th January. Have a very Happy Birthday babes........
Karina like Frank has matured a little since this photo was taken, but it's one of my favourite photo's of both of them.  I think I might live to regret putting matured....... she wouldn't thank me for telling everyone she is 35 years old tomorrow.

We left Frank to guard the cottage this morning, washing his paws as we went out of the door......... 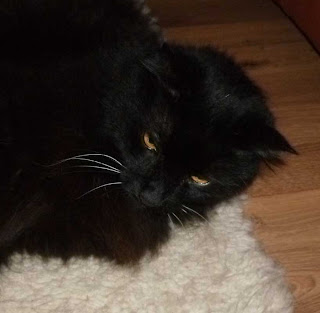 Franks a mouse magnet, not quite a beach and sand between his toes kind of guy anyway. 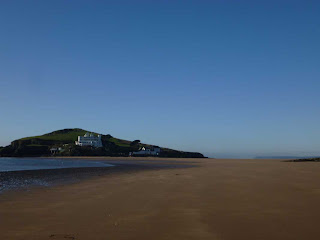 If you never got to the beach today, don't worry, I promise, it is still there. 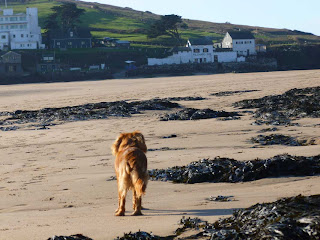 As usual you can find Freya Rose Blossom at  Catflap Cavalier....if you want to toddle on over for a visit.
Posted by Soggibottom at Wednesday, January 11, 2012

The beach is amazing!! Awwww! Great to see beautiful Freya have a whale (LOL!) of a time!Did she find lots of crabs? What fun!!

By the look of these wonderful pics, your January is certainly full of fabulous surprises! Take care
x

I would have loved to walk on the beach with you today. We have snow and 4 degree F wind chill. A good day to wrap up and read--which I did.

I shouldn't complain. It has been a nice January so far. I'm ready for Spring already.

What a beautiful photos of her and such beautiful eyes.
I wish I could walk on the beach or it would snow so I could cc ski, just cold or raining lately. I have been enjoying the moon and the night sky, so clear and pretty in the winter.

Happy Birthday to Karina - we hope she has a wonderful year ahead!

How we wish we could be near the seaside. And you are right, who would think you would be at the beach in January? Mother Nature is very confused lately.

Happy Birthday Karina--- how beautiful you are!
Gosh- the moon photo is fantastic, and your wonderful beach photo- makes us want to be there too- walking the sands and looking for treasures!
love
tweedles

Happy Birthday to Karina and I hope she has a wonderful day! I love the first picture and the one of her and Frank is so cute! Hope you are having a great week!

A very Happy Birthday to Karina. We've had fairly good weather here too. It looks almost like yours - almost.

Happy birthday to Karina - of course, you were a child when you had her, right? Beach looks wonderful, I love the seaside in the winter.

Happy Birthday Karina. Elizabeth will be 35 in August where have the years gone?

Looks like a lovely day - not too cold, and sunny! You'll have to let me know what that's like. *G* Grey here.

Happy happy happy birthday to Karina!!! And hugs and kisses to Freya and Frank!

I envy you living so close to the sea, looks like you had it all to yourselves; what beautiful pics!
Happy birthday to Karina.

Never know what treasures you might find in a pile of seaweed. It's cold and snowy here today. I can only wish I was on a beach. I'm doing the Frank thing today and staying inside.

There is no walking on the beach here. No, to much wind, rain and hail for that. Happy birthday to Karina, no one told me that she is 35.
Some good news, we have found a home for one of the pups in Holland. It will be a few weeks before he goes. He needs an escort to see him there safely. Love to all, Judith x

Your so lucky - you have such beautiful and scenic places near you. Love the photos of the beach. I wonder, hmmm Becky would probably just keep running ;)

please do not try to spam this blog .... You are not welcome.
Honest visitors only. You are just going to be deleted ! Try somewhere else :-) X