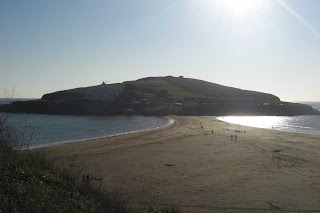 Weather breaking records in September. Winter tends to be too long and dark, make the most of the weather and head for the beach. . Seems as if the good weather is going to last into October, at least for the first few days.. 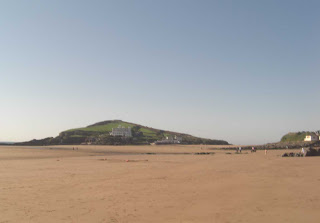 The beach we headed for yesterday morning was Bigbury Bay, across the sand is Burgh Island.
When the tide is in it covers the cause way, the only way back and forth to the Island  is then by a large sea tractor. 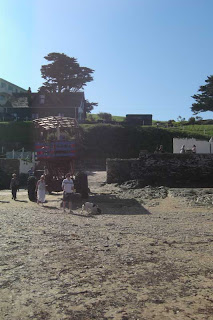 Burgh Island is famous for it's Art Deco Hotel. Visited by such people as Noel Coward, Edward and Mrs Simpson, Agatha Christie, the Beatles, Winston Churchill and Eisenhower.
It still stands as it did back in the 30's. I haven't been inside the hotel, but I know someone who has. They say that inside all the fixtures and fittings are still the original 1930 ones. The mirrors are starting to tell their age. Maybe that's only to be expected considering where the Hotel stands and surrounded by water twice a day. 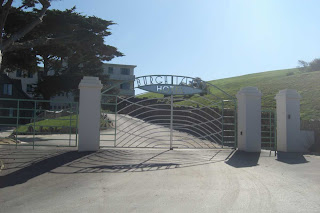 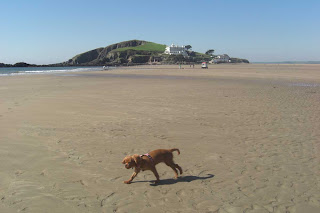 It's an easy walk across the sand when the tide is out. 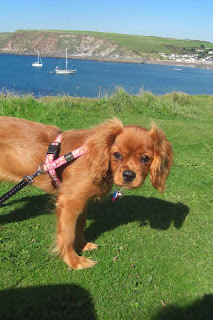 If you visit the Island make sure to avoid a rather large hole on the cliff top. It's one that Freya decided to leave behind as a memento of her visit. She brought some of the earth home in her paws.  Just like to warn everyone in case the rabbits get the blame for it. 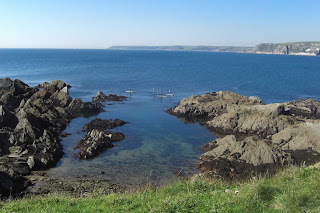 In the distance is Wembury, the beach we went to last weekend.There can't be a better way to while away an afternoon than watching the world go by from this spot on a beautiful day. Plymouth is slightly further down the coast. 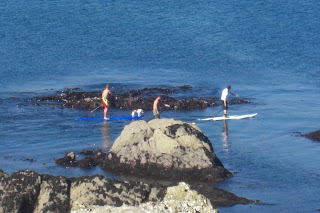 You never know who will pass, you might want to double click on the photo to see the dog on the surf board. 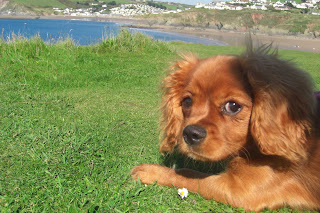 Not this one, she was too busy digging, 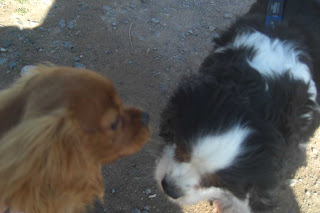 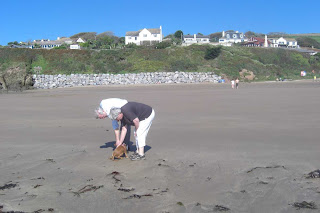 On the whole, accosting anyone who would make a fuss of her.

Mostly it was a digging 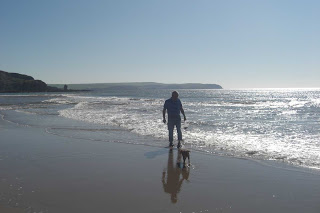 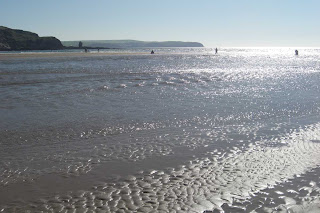 Where ever you are over the next few days, make the most of the great weather. 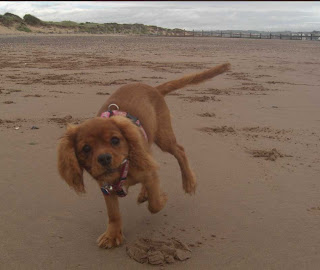 As usual you can catch up with Freya over on THE CAT FLAP CAVALIER
Posted by Soggibottom at Thursday, September 29, 2011

The days are lovely here, too. We played in the hose spray today, but we wish we were digging on the beach. That looks like the most fun.
Morgan, Tsar and the Porties

Great pictures. Thanks for sharing.

I could spend a summer there, I just love were you live, it is so beautiful and still retains the past with the present.

We are enjoying very good weather too but yesterday and today it rained. We have been sitting out on the deck in the evenings until it gets dark so that isn't bad for the end of September:)

That Freya is too cute for words.

Oh to be by the seaside with such gorgeous weather!!

Oh I am green with envy! Wish we were by the sea in this weather instead of having to go to work - why couldn't it have been like this in August!

What a wonderful outing! Looks like Freya had a great time at the beach.

Oh my gosh
How did you get such awsome photos!
What a lovely beach. Such beautious water.
Freya is having so much fun,, and we are sooo jealous
love
tweedles

I am loving this sunshine. I walked to the sweetie shop on Wesley Street which opened recently. They are selling "Blood Tonic" and "Elderflower and Bramley Apple" cordials. Bliss. Good to see that Freja is doing her bit for coastal erosion lol. Didn't that island appear in Agatha Christie's "Evil Under the Sun" with Suchet as Poirot? I'd love to see it one day and see how it compares to Morcambe's Midland Hotel- "Double Sin".

Enjoy that weather, it's cold and bleak and rainy here - how I wish I was walking the beach with you guys! I'd LOVE to see that hotel!

What a beautiful place! Thanks for sharing these great pictures! Wow is the word!

Great pictures of the beach!
What beautiful weather, we're jealous!

Wonderful photos! I am sure lovely visits to the beaches... Good stuff, and luck Freya!!!