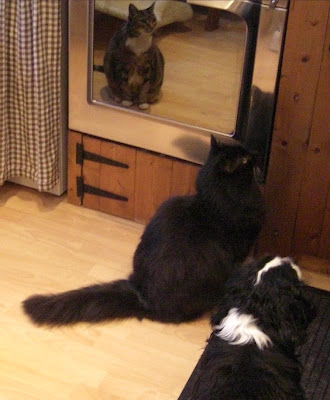 A big thank you to everyone who sent Amie Soto Blossom Birthday Wishes.

You will also know that if Amie really could talk, she would lisp slightly because of her missing teeth. If Amie hasn't got around to saying "fanks" to everyone, it's probably because she fell asleep at the keyboard. Forgive her. 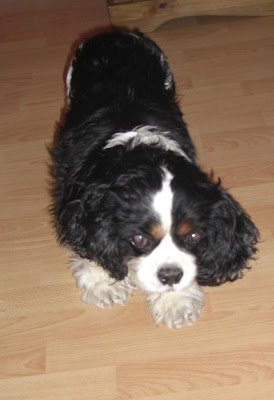 Amie is off to the hairdressers in the week.
To make her look smarter than the average Cavalier ?
Some hope, as she still prefers mud puddles to clean water paddling. I think the saying is that you can't teach an old dog new tricks. 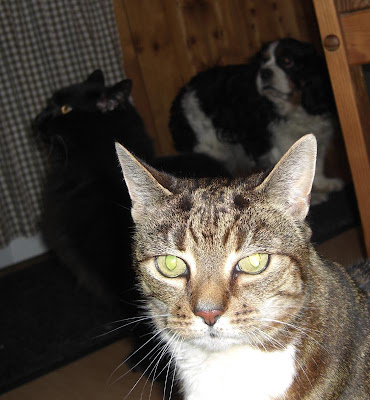 She had her birthday tea with Frank and Mew.

Fishies, what else, followed by a sneaky lick of the other empty dishes. 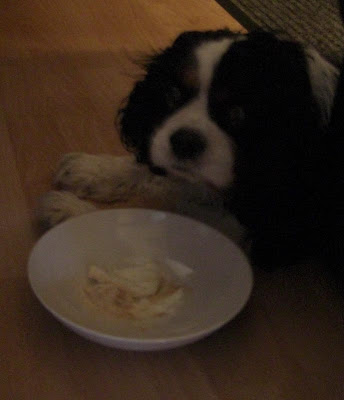 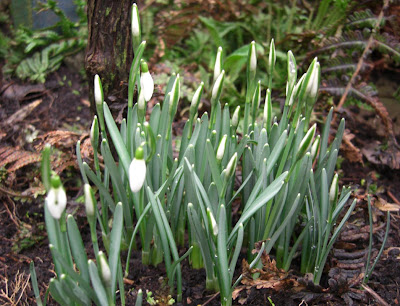 Around the cottage it has been a fairly quiet. For the first time in weeks we've been able to go and survey our garden. Lots of bulbs coming up, unbelievable to see after the hard Winter. For all those that still have snow, take heart. Spring isn't far away. 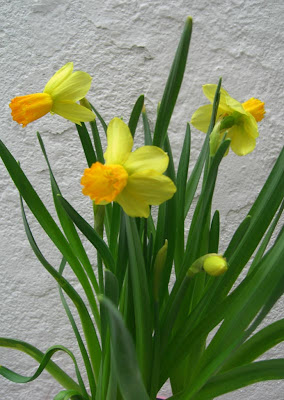 Tidying up the garden is going to take a few weeks. We could really do with an extra paw of two. 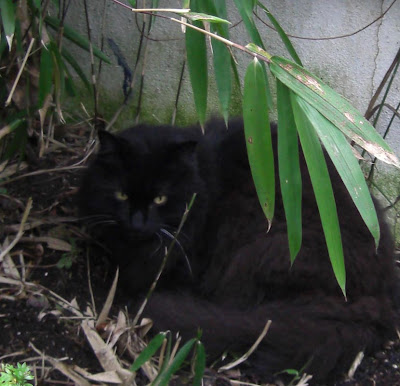 Frank was going to help, but decided not to get HIS paws dirty....
Posted by Soggibottom at Sunday, February 06, 2011

It looks like Amy had a wonderful birthday.
I can't believe you have flowers already, we are still chipping away the ice on the walks, so we can get out without falling.

Happy Birthday Amie!!!! It's so sweet that you had tea with Frank and Mew!! Yay for ice cream!!! Enjoy your trip to the hairdresser's! We hope you get lots of pampering!!!

The garden is looking good with snowdrops and daffs!! Spring is so on its way! Take care
x

I'm glad Amie got to have a sweet treat on her birthday!
Isn't it great to see the bulbs coming out? I saw my first crocus last week and we have snowdrops in bloom in the front garden. Perhaps the worst of the winter is over?

Glad Amie had a great birthday. I bet you're excited to see some of your bulbs blooming in your garden.

What a lovely way to celebrate your birthday, with your closest friends. Can't wait to see Amie with her new "do"!
I can't believe you've got bulbs - we can't see anything for all the snow - I know they're lurking though, I can't wait for spring!

We're so glad that you had a nice birthday with your friends. We have a lot of snow and more on the way. Mom is thinking about spring, but keeps thinking about muddy paws that comes along with it.

Oh well! We aren't allowed to help with the gardening anymore. Mom says we're a little too enthusiastic and don't take direction well.
Morgan, Tsar and the Porties

I am sure Amie is going to look like a doll, when she gets her hair done! I was surprised to see the bulbs up, in the garden, we got snow on Thursday night, but it is melting. More to come, today and this week! I got back from TX, just ahead of it!
I would have loved to have had some of the birthday ice cream with Amie and the mob!

I LOVE that she eats ice cream! Hope your all keeping well XXXX

Great birthday time, Amie. Too bad we don't do Facebook:(

Mom thinks those daffodils look so heavenly - she is eager for Spring here, we are NOT.

I think once we reach a certain age we should be allowed to do what ever we want. I am all for mud baths! YOU GO ROLL GIRL!
<3 Miss Kodee

P.S. Mom says to tell you, your cottage flowers give her hope spring is around the corner

Great pics...the kids AND the blooms. Hope you've had a good weekend.

Amie Soto Blossom knows how to celebrate - thats for sure!
love
tweedles

Midge, I just awarded you the Stylish Blogger Award. Check out my blog for details.

I'm so glad Amie had a wonderful celebration with those she loves best in the whole wide world. Even ice cream!
I can't believe you already have bulbs sprouting up and looking gorgeous. We are getting a bit of snow today but the high will be 1 C.