The good, the bad and the not tasty. 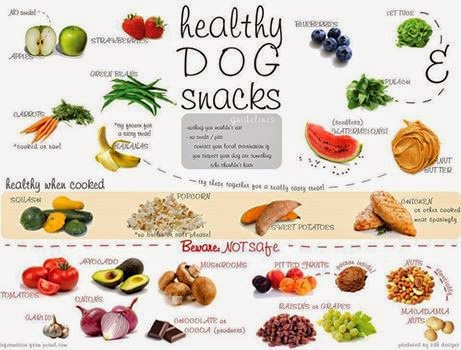 There are times in recent years one greedy cat who goes under the name of Frankie de tabby. Has been to known to eat onions, or at least he will if he can. I'm not sure if the above list applies to cats as well as dogs, but onions are definitely now off of Frankie de tabby's TO EAT menu, as well as other things on the list. 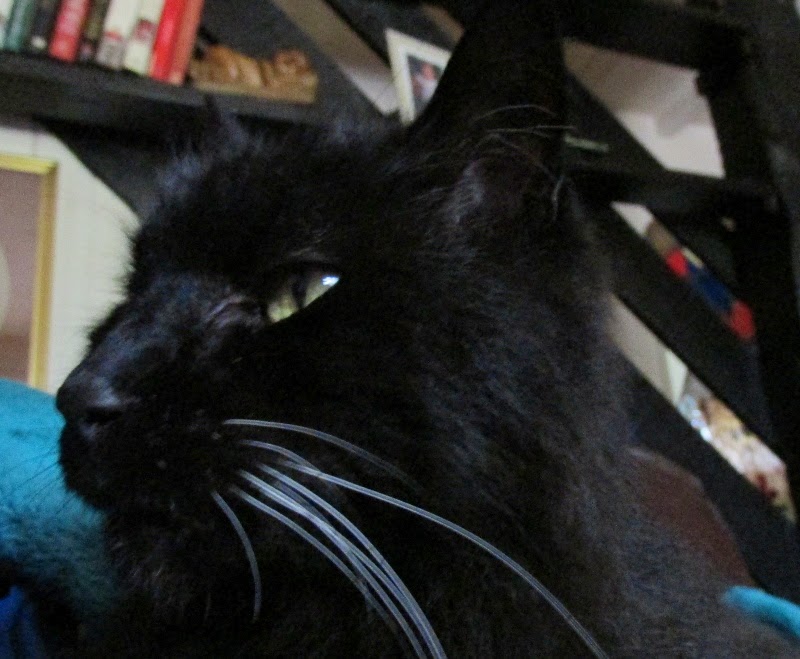 Frank has the attitude, that whatever your eating has to be fair game and he can eat it too. Especially if it's in striking distance of his paw.
As most Soggibottom visitors to the cottage know, Frank has a special claw for digging into an unsuspecting leg when your sitting at the dinning table. The brave tend to ignore him, the innocent gullible give in to the claw treatment and feed him under the table.
NOTE TO COTTAGE VISITORS.
No more onions and sneaky under the table feeding please guys.
Unfortunately Frank is now too old to break the habit of a life time, if you have to feed him, healthy stuff only.
He can eat, fish, chicken, steak, roast lamb/beef, the odd bit of bacon, spaghetti/pasta is also a favourite. No more sandwiches or cheese and crisp's. No more tasty sugar coated morsels of something nice. The odd runner bean is okay. He's also partial to peas and baked beans. Did I forget to mention normal cat food if there is nothing else around for him to scrounge on ? 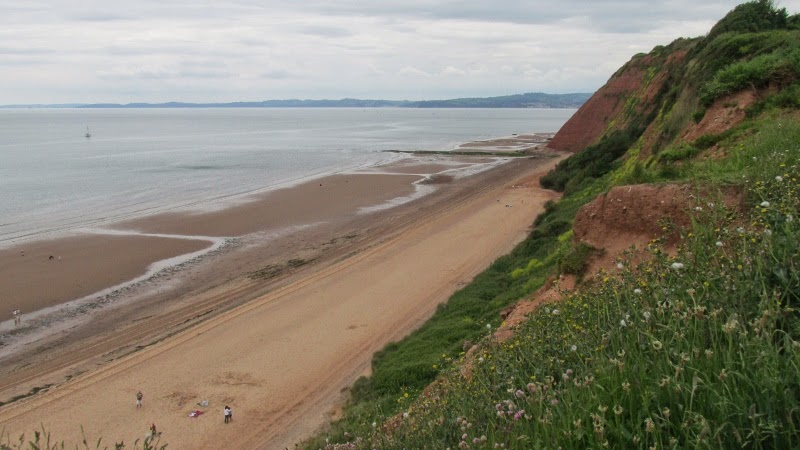 On a cliff top walk yesterday, we were unaware a certain Cavalier had been eating more grass than she should have. 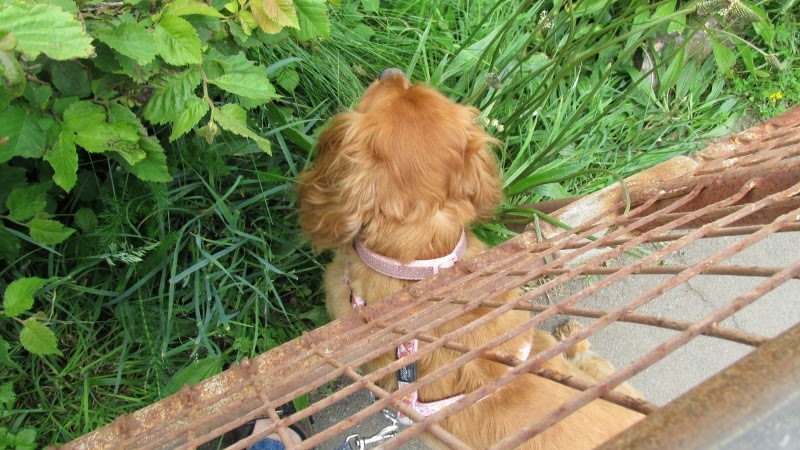 She had been eating sand (unintentionally) while digging her famous beach holes. 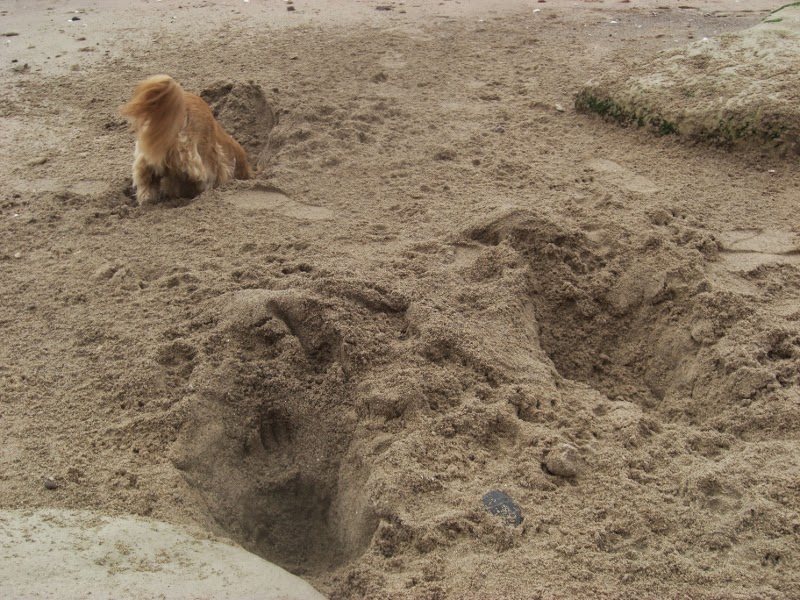 We all know dogs and cats eat grass. In Freya's case it helped her to be sick and give back the sand.
As we put her in her own special car seat in the back of the car, it came as quite a surprise not only to clear up sand and grass that she had barfed up, but a snail too. A whole live snail. 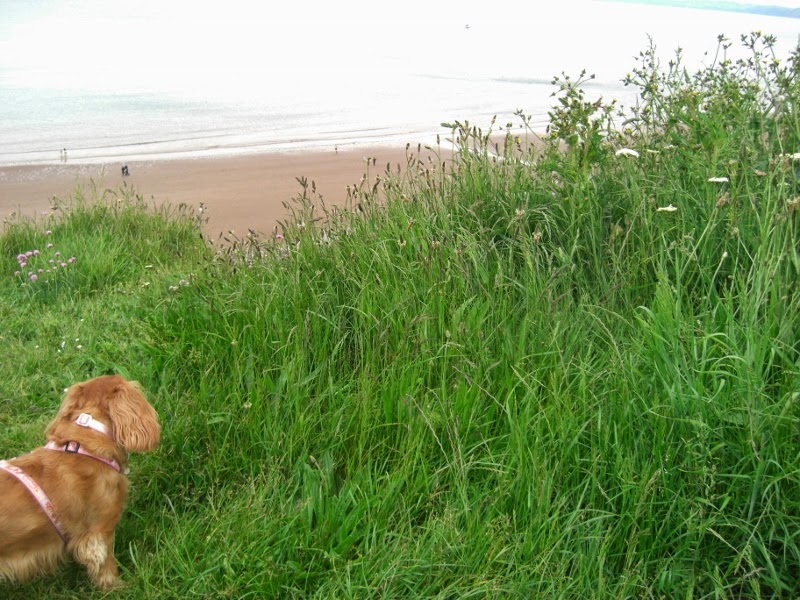 Snails really aren't good eating for dogs or cats.
As ONE OF US cleaned up the car, in some ways it was good to see the snail appear, it also reminded us to watch more closely what our dog is eating, even grass can have hidden dangers. 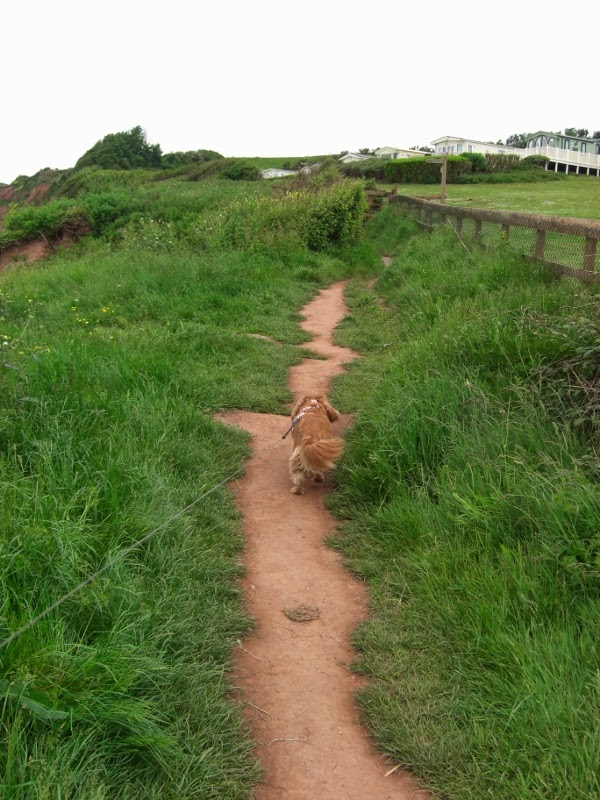 You never know who you might meet on a cliff top walk. 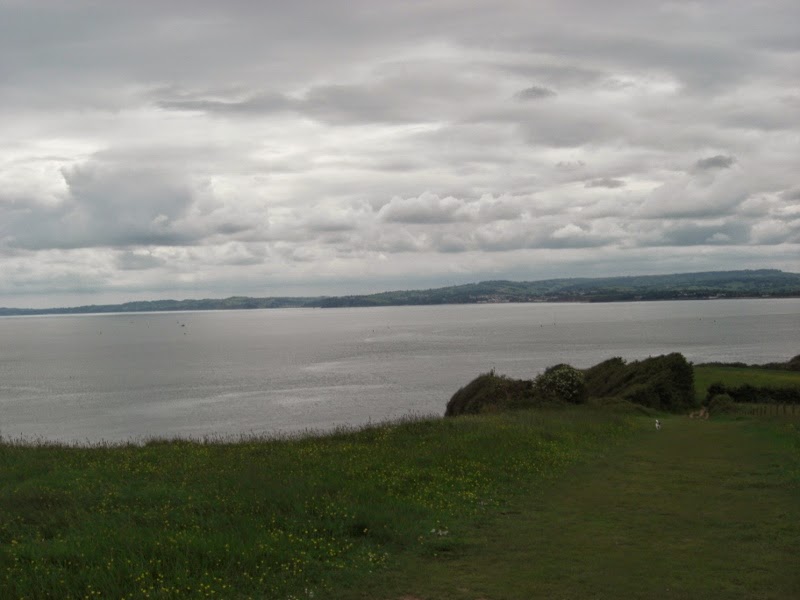 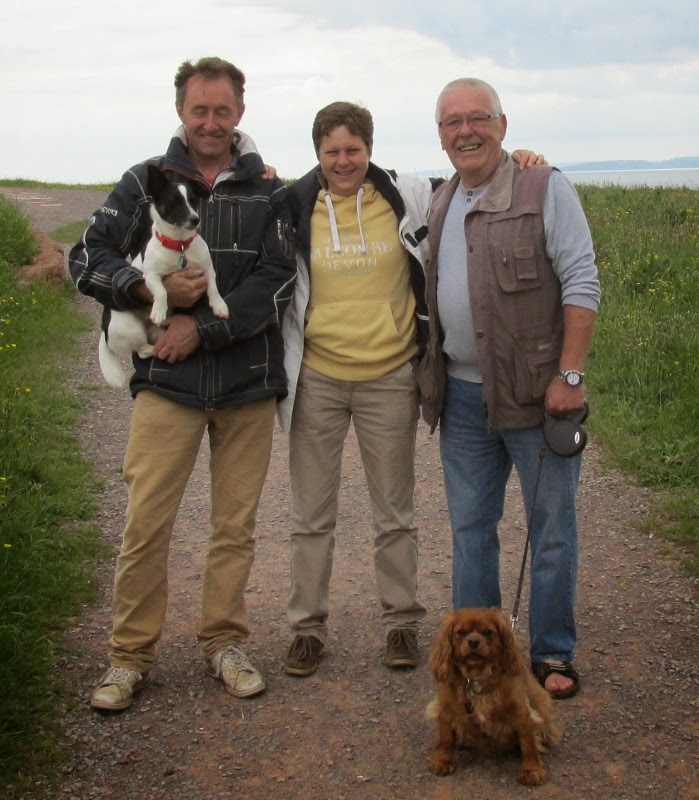 Graeme and Caroline knew we lived in the South West somewhere. Unknown to us, they had also moved and lived here for three years, only further along the coast. Good to see you and Alvin yesterday guys. What a coincidence meeting up on the cliff top. 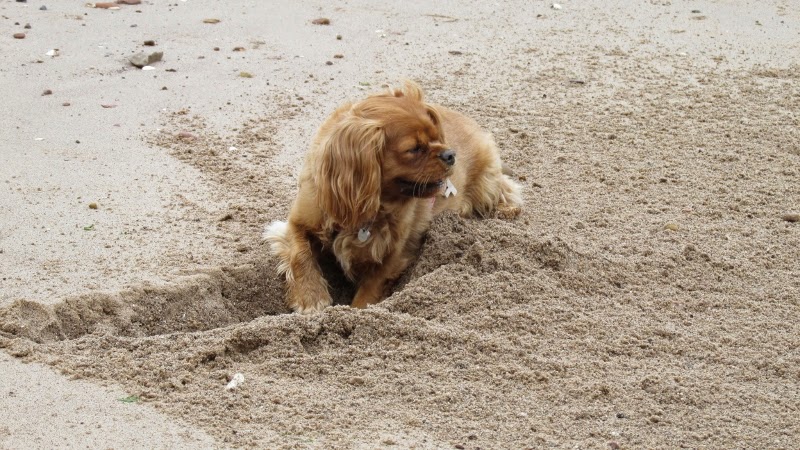 As for Miss Mutt, she is fine, no lingering worry about her, she ate her dinner when we got home under the eye of Frankie de tabby. 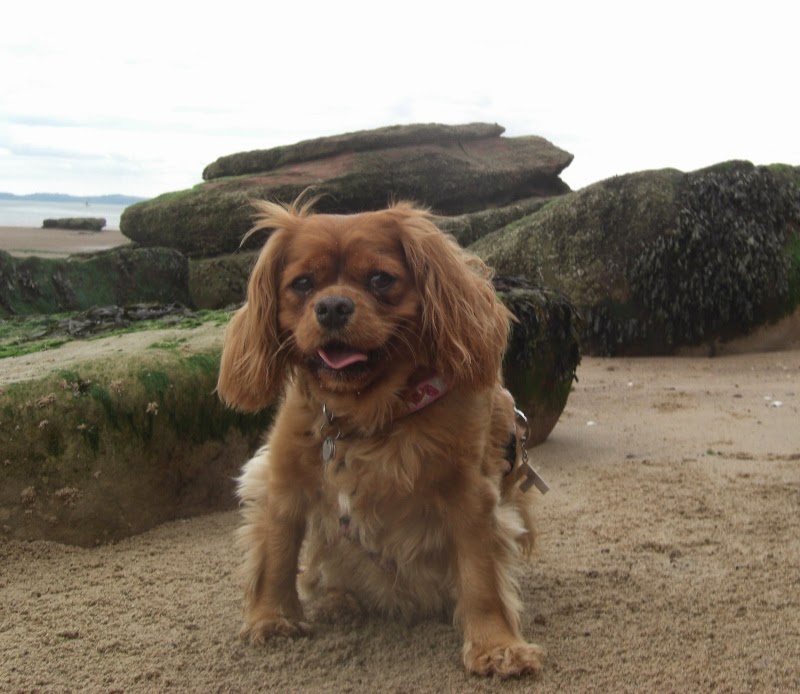 You can find Freya over at CAT FLAP CAVALIER along with her friends.

Lung worm is a parasite carried by slugs and snails. Left untreated it is often fatal.
Signs to look out for ....
Coughing, reluctance to exercise, depression and weight loss, fits, vomiting, diarrhoea.

Increased awareness means you can protect your pets, Freya and Frankie de tabby both have a WORMING TREATMENT and Flea Treatment every month given by a spot on product on the back of their neck. Freya and Frank don't have flea's, they are also protected from Lung worm. You never know, just because you think you are watching them every minute, there will always be one moment you aren't vigilant enough.

See you later, you never know, might meet you on the cliff top over looking the beautiful South Devon Coast line. X X X
Posted by Soggibottom at Wednesday, May 28, 2014

My dog ate rocks, lol. One time I was throwing rocks our of the garden and he tried to catch it and broke his tooth in half, so we had to stop throwing them;)

It looks like the tide was out, I love combing the beach at low tide.

Good to see all of you. As usual, great pictures. Hope all of you are doing well. Take care.

How nice to bump into your friends.

Glad Freya brought the snail up.

Yes we need to be careful after the wet weather as lung worm is a really worry with so many slugs and snails around. Luckily we are treated against it. Oh dear Frank we think the visitors have been read the riot act and no matter how much claw digging you do it will only be healthy stuff from now on. Have a wonderful Wednesday.
Best wishes Molly

We have a Frankie. His name is Smokey. He thinks it's his prerogative to eat anything that we eat. He will even lick the dirty dishes in the sink if I'm not fast enough. We do feed him very nice cat food too....and the best of cat treats. He was a feral kitten so I guess it's just in his nature to scrounge but some days...sheesh.

Oh my gosh- Freya ate a snail!!
Thank goodness she barfed it up!
love
tweedles

We just finished up our wormer and flea treatment for the month..wesa nevers heard of lungworms....stella rose

We have to watch Arty around snails...he has been known to try and eat them....
Smileys!
Dory, Jakey, Arty & Bilbo

I'm having a hard time with the whole "eating a snail thing"....

We had a cat that liked pretzels. He would come running for them. He was also a terrible beggar - if you didn't give him something off the table he would bite hard. LOL - he was one of my favorites.

Well I was thinking maybe Freya was part French, eating snails - then I read what you wrote about lungworm, YIKES!!!!!!!!! So very glad Frankie and Freya have you to look out for them! Love to the mob!

That is beautiful countryside. We do have to watch out for our pets!

I can't eat onions either Frankie :(

a LIVE snail? that's hilarious (since it turned out ok!) I'm telling everyone that! I visited my dogs yesterday and found the girls have been giving them cod liver oil for their old joints so they are in their second puppyhood and being total loopers. at 12 years old they ought to have a little more dignity, but no!!

My mutts like to eat dirt. They first dig a hole, then they lick the dirt. I hate seeing them do this, so I thought I'd fix it. I took some chili powder, the hot stuff, out and liberally sprinkled it on the dirt in the hole. Then I let the dogs out.

They immediately ran to the hole and pushed each other to get to the chili flavored dirt. They thought t added some much needed spice. I can't win.